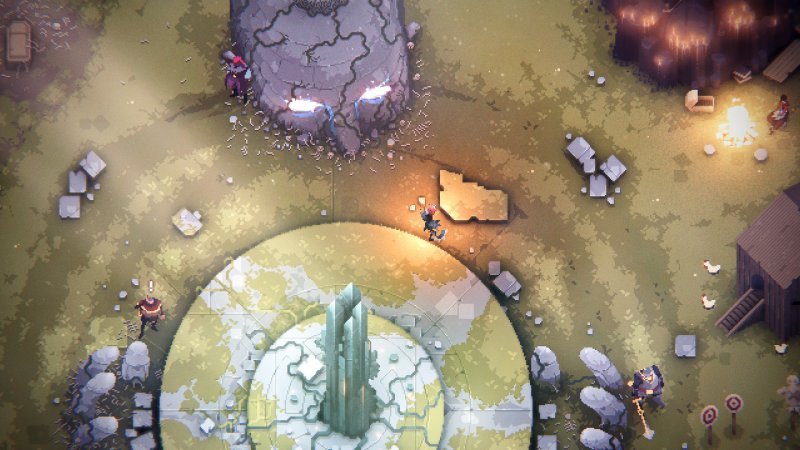 Have you ever wondered what would happen if Dark Souls-style environments and combat were combined with Tetris-style puzzles? Probably not, but he did it for us Straka Studio, an independent Slovak team which, in its first “important” production, certainly wants to demonstrate that it has extraordinary intuitions. But is the unusualness of a content sufficient to make a videogame work really meaningful?

Let’s find out in the Loot River review.

Loot River is not a game that relies too much on the story it wants to tell, but rather focuses on the atmosphere it intends to create. There is very little information provided to the player, so much so as to be substantially useful suggestions to create that aura of mystery necessary to immerse the player inside this gloomy and austere universe.

The game takes place between the narrow alleys and the intricate corridors of one city ​​invaded by water, where the only way to move is through the floating platforms that make up the sporadic and changing battlefield, on which countless clashes with fearsome enemies take place. The player is therefore called to venture into the various environments of the urban space, in order to obtain knowledge (not only linked to the lived experience, but also to a real game currency) and rewards of various types, from weapons to useful amulets to overcome the recurring play areas.

Recurring, yes, because Loot River embraces the rougelike philosophy, leading the player to start their journey all over again every time they fall into battle. Not only. The other peculiarity of Loot River is its own procedural naturewhich promises to change the pitch with each new attempt.

From how it was presented, this feature seemed to be really relevant for the exploration of the environments, but we found with some disappointment that, in reality, it is large recurring patterns which are randomly joined together, leading to a new framework of the levels, but which begin to become familiar after a few hours of play (a necessary condition, most likely, also due to the puzzle structure of the mobile platforms).

A fusion of mechanics

Loot River seems to be above all an action game, very technical, but one soon realizes that the variant of the puzzle is an integral part, if not the real driving force of the scene. There mechanics of mobile platforms that become little exploration puzzles works very well, but the “revelation” comes during the combat phase, when ingenuity is all about taking down the enemy.

Much more than in other similar cases, it can actually be done strategyisolating enemies, bypassing them, but also hitting them incessantly without giving them the chance to counterattack in any way.

The interesting fact is that, initially, there is a tendency to have a “classic” approach to the game, using only marginally the possibilities offered by the movement system. This allows you to learn to face enemies individually and understand their behavior, but it also takes a lot of time, incredibly slowing the pace of advancement. However, from the moment you start using the environment to your advantage, the game seems to change, becoming not only extremely interesting, but also a lot of fun. At least until repetitiveness comes into play.

The repetitiveness, between life and death

Being a rouglike, in Loot River it’s good to expect to die (and a lot). The game doesn’t give you anything. Indeed, the unpredictability of the positioning of the enemies makes everything even more precarious, transforming every corner into a potential point of no return. Obviously, once we die, everything we collected during the previous game disappears permanently, without the possibility of going to recover what was lost. Which is written in the actual soul of this type of video game, so nothing out of the ordinary.

The problem arises when the possibility of progression it is provided to the player with the dropper: Loot River falls into that category.

Being able to actually finish anything other than exploring the first two rooms over and over is a process that takes many hours of gameplay. This pushes the player to slow down and learn about the environments and places (as it should be, at least when this procedure is implemented sparingly), as well as collecting as much as possible and then buying items at the “headquarters” (which will come made available immediately and then added to the rewards that can be obtained randomly from enemies or from the chests scattered throughout the various levels).

The effect of “going round and round” without ever completing anything becomes very strong after the initial excitement begins to subside. Even by unlocking a large number of weapons, spells, equipment and modifiers (the latter being the real elements of variety), your success or defeat will always be guided by a long-time friend of such video games: the fortune. This is one of those unknowns that are either implemented very well, or they just frustrate the player. In the case of Loot River, if the right object does not happen at the right time it is practically impossible to go far, as it is likely that a stroke of luck will make you advance very quickly from the first minutes of the game.

As much as it seems to want to reward the player for his technique, the title rewards those who have not had enough luck with fights that are not difficult (at least once you have learned the movements of the enemies), but extremely long, exhausting and mostly repetitive. We have encountered more than one opponent characterized by monotonous, almost rhythmic fighting styles (including one of the main bosses of the game, who can be defeated by exploiting the same “trigger” again and again without ever seeing a variation in the approach by. the latter, resulting in an insanely monotonous fight). This, at least, when the clashes flow smoothly, without unwanted “hitches”.

The criticalities of a changing world

What has been said so far paints a mostly intriguing overview, characteristic of a type of game that may or may not like. So far we have left aside i real problems of Loot River, those that undermine the player’s experience in the negative. The fact of having to start “all over” is already a prospect that intimidates the user, so imagine what it means to have to restart the game due to an inevitable mistake.

Loot River is a game studded with technical criticalities. There are simple glitches of a visual nature, mostly harmless, but it also comes to the caliber of bugs that block the game irreversibly. And, coincidentally, they spring from one of the game’s biggest unknowns: mobile platforms.

It has happened to us several times that our or other characters got stuck between the platforms, unable to move or receive attacks. When this happens to minor enemies, you put your soul in peace and proceed, but when it goes to influence your alter ego or some boss there is no doubt that you are practically facing a “game over”. Imagine starting a very fruitful game that has been going on for more than an hour because the boss on duty is stuck somewhere and no longer allows you to inflict damage on it in any way.

These problems are the very kind of elements that destroy the structural value of a game like Loot River. You pass the luck, you pass the difficulty, you pass also the repetitiveness (if exploited properly), but the computational error is something that cannot proliferate to such an extent within a similar title.

The other side of the coin is represented by the audiovisual sector. If the technical filth does not take long to present itself, it is bizarre how in a short time the game is able to “heal itself”, making the player forget about the misadventure he has just experienced only by re-proposing the same visual and sound elements, in a sequentiality that should be stale , but which tastes more like an aphrodisiac. The meeting between pixel-art and realistic lighting, as we had already stated in our test (where you can also find a more targeted in-depth analysis of the game system), is capable of creating a familiar visual universe (it does not seem risky to say that titles like Dead Cells and Blasphemous influenced the team’s creative process a lot), but still very peculiar and recognizable.

However, the real highlight is the soundtrackprobably the most successful element of Loot River, the main proponent of the atmosphere that founds this game full of mystery, yes, but also full of shrewd tactical fury.


The flaws surrounding Loot River are undeniable. To weigh on the already precarious balance between progression and exploration are added some not indifferent technical criticalities, often capable of undermining the gaming experience in a markedly frustrating way. Yet, we cannot help but continue to think about those places, those sounds, those mechanics that, even if grabbed left and right and tied together with twigs and mud, managed to bewitch us. After being forced to reload a game for the umpteenth time due to an unexpected problem, one would think that you never want to open such a game again. One would expect to disdainfully uninstall such a root-rotten title. So why can’t we wait to sail the waters of that lopsided and fascinating world again? Perfection, the ultimate utopia of the modern era, is a dangerous fair to follow. Often it is precisely the lack of the latter to denote the experiences that most creep under our skin.

Loot River, the review of a game outside the box