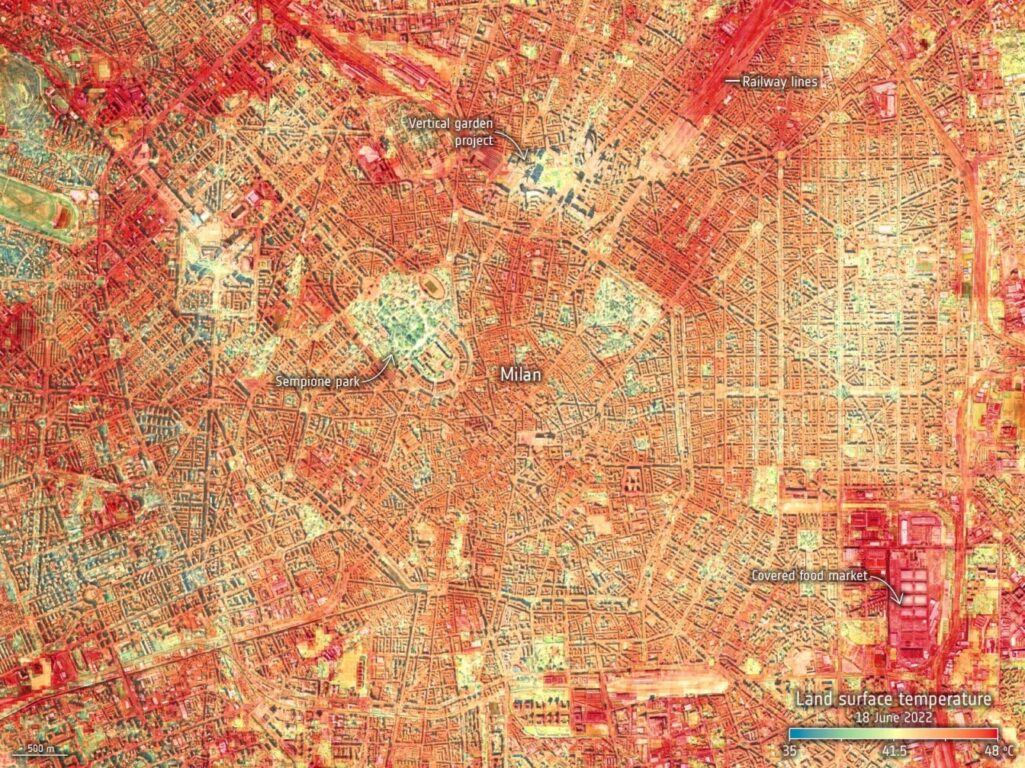 The effect of urban heat islands (from English urban heat island effect), has been known for some time. THEn the city is warmer than in the countryside. But how much hotter? A tool of the International Space Stationcalled Ecostresshe found, by measuring the ground temperatures of the cities of Milan, Prague and Paris of last June 18 in the early afternoon. “Urban heat islands occur when natural ground cover, such as vegetation, is replaced by a high concentration of pavement, buildings and other surfaces that absorb and retain heat,” explains theHex.

“The images clearly show how hot the surface is in built-up areas of cities,” the space agency experts continue, “but they also clearly highlight the effect refreshing from parks, vegetation and ponds“. The latter are colored with various shades of blue and green that indicate temperatures between 32 and 41 degreesand those cemented which also reach i 48 degrees centigrade. The phenomenon occurs because cemented surfaces they have a high thermal inertia and – a bit like cast iron radiators do – once heated they dissipate heat very slowly.

This type of detection, explains the site ESA, the European space agency that leads the project in collaboration with NASA, offers useful information to mitigate heat waves in the future through better management of water resources. The two agencies have recently started a partnership to study and find solutions to climate change. A technology that will be the game changer for urban planners. Experts have long advised plant more trees in cities to cool them, as mentioned in an article by Vox. In fact, water evaporates from the leaves of the plants, which in passing from the liquid to the gaseous state uses energy which would otherwise be absorbed by the ground, warming the concrete jungle of the cities even more.

ESA also explains that another objective of the surveys is to meet the needs of European farmers in order to make agricultural production more sustainable at a time when droughts are becoming increasingly common and intense. The aim is to obtain greater productivity from the same amount of water used.

The findings come while a large part of Europe is gripped by one strong heat wave which hit record temperatures for the period in many cities. «It seems that the heat waves», we read on the ESA website, «are increasing in frequency, intensity and duration due to climate change induced by human beings. Last June was a caustic reminder of what lies ahead ». For several consecutive days, many European cities have touched temperatures above 40 degrees. Is Rome and Naplesfor example, they never had touched the 40 degrees so early in the year.

Maps of the “urban heat islands” in Milan, Paris and Prague seen from space. Scientists: “Plant trees to cool cities”