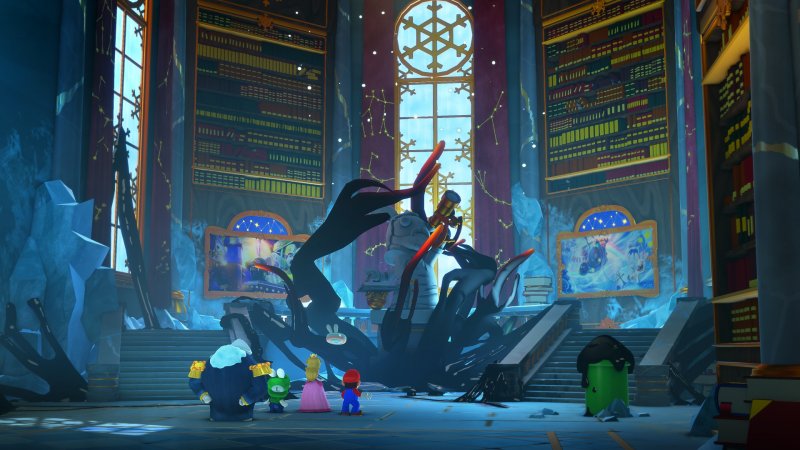 At the offices of Ubisoft Italy we tried Mario + Rabbids Sparks of Hope, the new exclusive wait for Nintendo Switch from Ubisoft Milan.

Mario + Rabbids Kingdom Battle was the classic underdog story that made it. Since the memorable presentation at E3 2017, with His Majesty Shigeru Miyamoto on stage and Davide Soliani in tears in the audience, everything has fitted perfectly to ensure that the work of Ubisoft Milan (and Paris) managed to become a critical success, but also with the public. As the 10 million people reached by the game demonstrate.

Once the work on the popular DLC starring Donkey Kong was closed, however, a new phase in the life of the Milan (and Paris) studio began: with the spotlight on it and the well-deserved trust of Nintendo and the parent company behind it, the pressure to create a follow up to Kingdom Battle must have been high.

Soliani’s ambitions too, Cristina Nava and partners, however, were high and, instead of settling for a sequel to Cliffiana memoria (bigger, better and more badass), Ubisoft Milano chose to aim for the stars.

Thanks to test of Mario + Rabbids Sparks of Hope that we were able to do at the Ubisoft Italy offices we were able to begin experimenting with the many innovations introduced in this ambitious second chapter. Let’s find out which ones.

The first thing you notice in Mario + Rabbids Sparks of Hope is the fact that Ubisoft Milan, like source of inspiration overall, he chose none other than Super Mario Galaxy. From the masterpiece for Wii, the Soliani team has certainly stolen the structure of the levels which, even in this case, are planets, as well as some of the main co-stars: the Sparks, in fact, are the perfect fusion between Mario’s Sfavillotti and the Rabbis. , while Rabbid Rosalina, well, is self-explanatory. The new “princess” is a bit ‘the antipodes of Rabbid Peach: if the latter is always in a good mood and rowdy, the new playable character is definitely less energetic, “it’s all of us on Monday morning” jokes the senior associate producer of Ubisoft Milan Cristina Nava.

Despite this, they are the Spark the real … stars of the whole production. Not only because they give their name to this second chapter, but also because they are the symbol of the collaboration between Ubisoft and Nintendo. Their design, in fact, Nava told us that it comes from a joint work between the French company and the big N, always very careful about how all its intellectual properties are used. Let alone that of Mario.

The senior associate producer, however, told us how the one with Nintendo is always a healthy and constructive relationship which has never led to conflicts between the parties, although the Rabbids are always (tasty) rough, very far from the composure of almost all the characters of the Kyoto giant. Yes Wario, we’re referring to you.

“We are the first to be gods Nintendo fans and we want to be faithful and consistent with his characters “, reiterated Nava,” for this reason we knew what the limits were that we could not overcome. “A statement that we did not find it hard to believe, given that among the ranks of Ubisoft Milan now there are many former journalists who have contributed to spreading the Nintendo Difference in Italy with NRU such as Davide Soliani himself, but also Andrea Babich, Ugo Laviano, Claudio Magistretti and many others.

The references and citations to the Mushroom Kingdom therefore come naturally, even if in this Mario + Rabbids Sparks of Hope perhaps we notice even more the desire to try to involve a greater number of people, with quotes external to Ubisoft and Nintendo such as the channeling flow, and the desire to try to establish one’s own legacy with unpublished characters, situations and stories.

It is no coincidence that it starts exactly at the end of Kingdom Battle: Mario and the Rabbids are about to enjoy the well-deserved rest after saving the world, when a new calamity comes to upset the Mushroom Kingdom and will force our heroes to travel the galaxy in order to defeat the new threat.

Thanks to this excuse, the development team will take the team around the planets scattered around the Mariesque galaxy. An intelligent narrative choice that allows the team to simplify their life thanks to thelinear exploration of the planets, this, however, introducing an element of exploration and variety within them. Each new celestial body, in fact, will be freely explorable and will allow the player to choose whether to go directly to the final boss or dedicate himself to the many secondary missions, useful for gathering resources and experience.

From the point of view of the gameplay the biggest novelty of Mario + Rabbids Sparks of Hope is the abandonment of the square grid, one of the key elements not only of Kingdom Battle, but also of all turn-based strategy. The purpose of Ubisoft Milano is to abandon a rather alienating and typical element of a niche genre, to make the gameplay more dynamic, fast and spectacular. Much more from Mario in 3D than from XCOM.

A change that does not change the backbone of all Mario + Rabbids Sparks of Hopebut it certainly changes the perception and use, since you will never be with your hands, since between Bob-ombs to be collected and thrown and team jumps to direct there will be something to do even once the shift has started.

The others Announcements they will become more noticeable as the game progresses. Unlike Kingdom Battle, in Mario + Rabbids Sparks of Hope the various characters will not change weapons during the game and will be much more defined right away. Mario has a double hit, Mario Rabbid is a force up close, Luigi from afar, Rabbid Peach is a healer, while the real princess protects her companions.

To ensure variety and a sense of progression during the game, Ubisoft Milano decided to take advantage of the Sparks and to introduce an even more complex and deeper skill tree. Genetically modified Luma are able to grant unique abilities to weapons and characters: there is the one that increases the damage and the one that gives elemental power to the weapons, the one that heals and the one that enhances the slides. Pairing them with certain heroes seems the most logical choice: Edge (the new Rabbid Emo), for example, is an expert in sliding and a Spark that enhances this move seems the most effective choice, but you could also try new combinations, just for have fun with the flexibility of the gameplay.

Before each fight, in fact, they can freely redistribute all experience points assigned until then, so as not only to give players the opportunity to have fun with all the options, but also to model the team based on the enemies faced. Before each battle, in fact, you can explore the level and study each enemy in the field so as to arrive prepared: it is useless to have many electric Sparks if the enemies are resistant to that element.

The rest of the game structure has remained almost unchanged: you explore the level in search of the elements useful to solve the simple environmental puzzles that fragment the progression, or the steps to reach those areas of the planet apparently inaccessible. Meanwhile, you can run into the enemies that dot the area: by doing this you will be teleported to an independent and closed area in which the actual combat will take place.

Here you will find the classic elements of the series, such as the tubes to move quickly from one point to another on the map, the vertical development to exploit to your advantage or the types of missions to complete to overcome the mission.

Snowdrop to the nth degree

The other element that immediately strikes is the aesthetic one. Although the development team is the same, the console has more than 5 years of life and the graphics engine is always the Snowdrop, Ubisoft Paris (and Milan) have managed to squeeze the antiquated Nintendo flagship. Mario + Rabbids Sparks of Hope retains the style and setting of Kingdom Battle, but is incredibly richer in detail, special effects and cutscenes.

All with a more complex world to calculate, created to be explored at 360 ° and with many more variables to manage, such as having faced or not side missions, or having equipped powers instead of others.

This detail level greater allows everything Mario + Rabbids Sparks of Hope to have even more personality than in the past, to tell a story in an even more epic and cinematic way, to give greater depth to the various characters, without sacrificing the funny humor that has pervaded this crazy union between the Mushroom Kingdom and the crazy Rabbids.

For the moment we do not express ourselves on the audio sector, except by noting the presence of the dubbing in Italian of a part of the dialogues: the music of the trio of wonders formed by Grant Kirkhope, Yoko Shimomura and Gareth Coker they deserve to be listened to with the right attention, something that for many reasons is not possible to do in a press event.

The test by Mario + Rabbids Sparks of Hope has shown how the Ubisoft Milano studio has matured in recent years. If Kingdom Battle was a first work that surprised also thanks to the fact that it arrived a little quietly, this second chapter has much more pressure on it and it will not be easy to meet all expectations. Instead of a conservative sequel, the Milan studio has chosen to change the structure of its gameplay, giving more freedom of action, options and possibilities to its players, who will experience a more epic and complex adventure than in the past. Improve? This is early to say, but we have to wait a little, as Mario + Rabbids Sparks of Hope will arrive exclusively on Nintendo Switch on October 20th.

Mario + Rabbids Sparks of Hope, we tried the space exclusive for Nintendo Switch