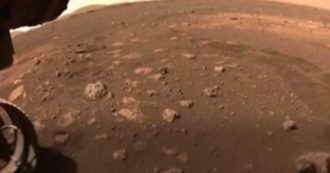 The rover Perseverance of the NASA found on the surface of Mars rocks they contain organic molecules and which, according to experts from the American space agency, could be “a possible one life signature“. That is, attributable to “one substance or to a structure that could testify to theexistence of a past life on the red planet, but which could also have been produced without there being life ”. This was announced by the mission leaders at an online press conference.

Perseverance on Mars, the NASA probe fails the first attempt: no rocks from the Red Planet

The molecules found in the Jezero crater, which Perseverance has been exploring for a year, are not biological molecules, but include a variety of compounds: mainly carbon, hydrogen and oxygen, but also nitrogen, phosphorus and sulfur. We are therefore dealing with precursor molecules, possible building blocks of biological molecules, but not necessarily such. The experts of the Jet Propulsion Laboratory (Jpl) of NASA, responsible for the activity of the Perseverance rover, specify that such molecules can be produced by chemical processes that do not involve the presence of life. The rocks which contain organic molecules are four and are part of the 12 so far collected by the NASA rover in its first year of activity on Mars, in the Jezero crater and destined to be brought to Earth in the future, by the Mars Sample Return (Mrs) mission, whose launch is scheduled for 2027said Lori Glaze, director of NASA’s division of planetary sciences.

However, these are not the first organic molecules discovered on the red planet: already in 2013 and then in 2018 another NASA rover, Curiosityhad discovered molecules on the Martian sound that contained elements “commonly associated with life“,“ But which can also be associated with non-biological processes ”, as the mission leaders said at the time. Certainly the last four rocks collected by Perseverance since last July 7 are sedimentaryother than those igneous which about a year ago began to collect in another point of the Jezero crater. This is one of the most evocative places on Mars for researching past life because about three and a half billion years ago it housed a large lake into which a river flowed. Here Perseverance arrived in February 2021.

The first rock to have been collected by the rover is called Rochette and like the other seven collected later it is of the igneous type: it was produced following the crystallization of magma. The last four, collected in the area of ​​the ancient river delta, are instead part of the second part of the sample collection campaign and contain organic molecules. These are not biological molecules, the experts said Jet Propulsion Laboratory (Jpl) of NASA, responsible for the activity of the rover. Rocks mainly include carbon, hydrogen and oxygen, but also nitrogen, phosphorus and sulfur: molecules of this kind can be produced by chemical processes that do not involve the presence of life. It was the tool that analyzed them Sherloc, equipped with the Watson camera and the research group in charge of studying the data, there are Italians who work for the Arcetri Observatory of the National Institute of Astrophysics (INAF). Almost certainly the answer on the nature of these molecules will only be available when the rocks reach Earth thanks to the Msr mission relay, which according to Lori Glazedirector of NASA’s division of planetary sciences, could leave between 2027 and 2028, while the first samples could arrive on our planet in 2033. In the meantime, Glaze said, many problems will have to be solved, including finding a site safe in which to land Msr program vehicles.