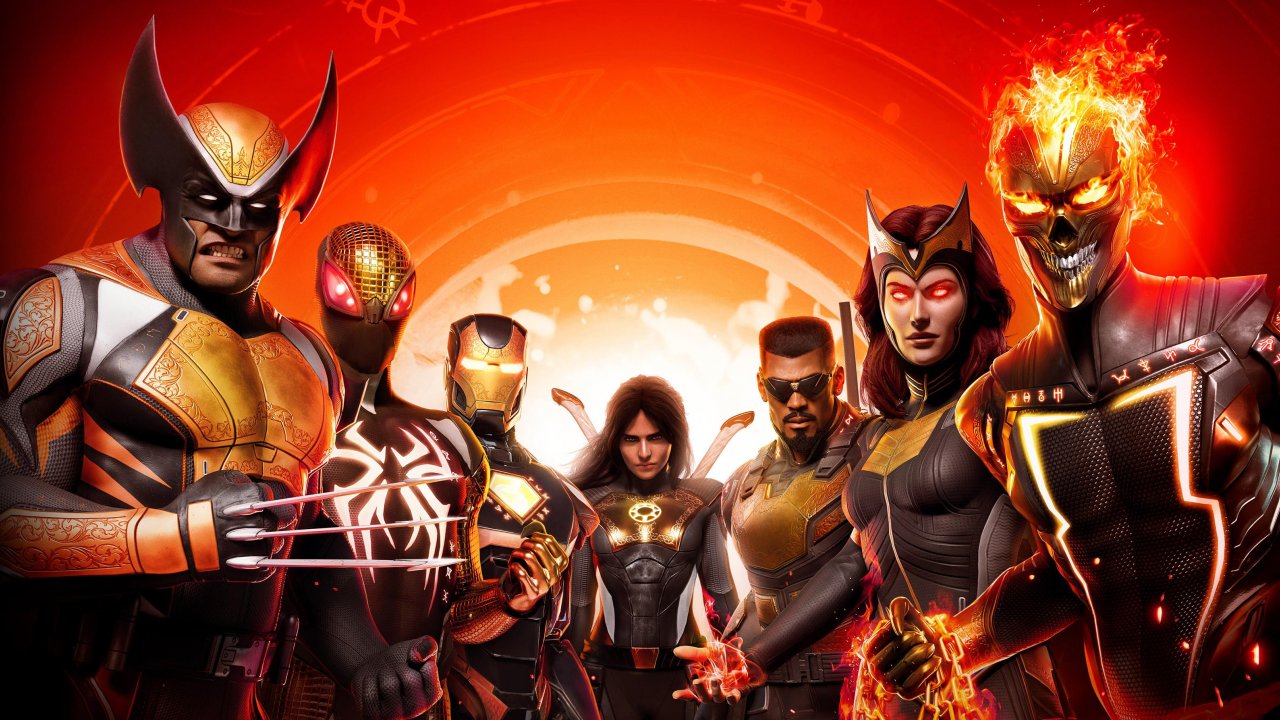 We tried Marvel’s Midnight Suns, the new superhero-based tactical RPG from Firaxis and Jake Solomon, the creators of XCOM.

After waiting and imagining it so much, we were finally able to get our hands on Marvel’s Midnight Suns, the long-awaited new project by Firaxis Games, none other than the development studio behind Civilization and XCOM. And precisely with the latter, the new Marvel designer game shares many things, starting with the Creative Director, or that Jake Solomon who first helped to reinvent the almost homonymous series created by Julian Gollop in 1994 and then to revolutionize his own creature with a beautiful sequel and its expansion War of the Chosen.

Not happy with the success achieved, capable of influencing the entire turn-based strategy genre, just think of Mario + Rabbids: Kingdom Battle, the team at 2K Games has decided to further evolve its game formula, in order to adapt it in the best possible way to the license that fell into their hands.

According to Solomon, in fact, it was Marvel who approached the Baltimore County-based studio after the success of XCOM 2, in order to understand if there was room for working together. And if they offer you the chance to use the Avengers, Spider-Man and all the other characters from the House of Ideas in your own game, you can’t refuse the offer.

So here is the Marvel’s Midnight Suns project that begins to take shape, a game that builds on the solid foundation of XCOM, but tries to do something that neither Firaxis nor Marvel itself had ever done before: a tactical RPG with a fully customizable superhero.

We have tried Marvel’s Midnight Suns in its PC version a few days after its release and we are ready to tell you a few more details of this interesting project.

A first confirmation comes from the source of inspiration of the game, or that The Rise of the Midnight Suns which gave birth to the group of superheroes of the same name in a series of Marvel comics. Also in the video game there will be Blade, Ghost Rider and associates, there will also be the very powerful Lilith, but the Firaxis team has decided to rewrite the story in order to be more congenial to the new media, as well as to allow for a roster of characters wider and more varied than the original one.

In fact, there will not only be the Midnight Suns, but also pieces of the Avengers and X-Men, for a quite diverse cast of characters. It is true that there are 90 pieces such as Iron Man, Spider-Man, Doctor Strange and Captain Marvel, all projected into the Olympus of pop culture by recent films, but the presence and charisma of the various Blades, Ghost Riders should not be underestimated , also protagonists of decidedly less successful film adaptations, and of the other Suns.

Also because the strength of the Avengers has been paired with that of the other “minor” heroes, not to mention that they are not exactly the same characters we have come to know (the multiverse nullifies a lot of potential inconsistencies). A narrative device that gives everyone the opportunity to shine in their own light and play an active role within the team.

In addition to the more or less well-known characters, we will be the protagonist, a creature awakened from a sleep that was thought to be eternal precisely to defeat Lilith.

As we said Hunter will be fully customizable through a editor rather basic that gives the possibility to choose different details among the various presets proposed. There are more flexible tools than the one offered by Firaxis, nevertheless the possibilities to affect one’s alter ego are manifold. Especially in terms of clothing, both battle and casual.

The structure of Marvel’s Midnight Suns resembles that of XCOM. The game is divided into three stages, that of preparation, that of combat and that in the Abbey. The first two, despite the proverbial and notable differences with other games, are easy to understand. Less immediate is the stage ofAbbey, a novelty for Firaxis, since this is where the RPG soul of the game is consumed. Between one mission and another, Hunter and his team will spend their time inside the Abbey, the base of Marvel’s Midnight Suns. However, this is not a “simple” deconsecrated church, but the place where all those who face Lilith have moved to better face the new threat.

In other words, inside there is both Tony Stark’s scientific laboratory and Strange’s Sancta Sactorum, as well as Blade’s gym and Captain Marvel’s operations center. Behind these names are the Marvel versions of structures that XCOM lovers, but also strategic players in general, know, such as the armory, where to send operators on missions or improve the skills of their warriors.

Interesting, however, is how Firaxis decided to organize everything, i.e. not through static screens, very clear and immediate, but not very immersive, but as a freely explorable three-dimensional hub.

If the base is located inside the Abbey, complete with social places in which to improve one’s relationship with the other Suns, there is a large area outside to explore, full of secrets to find and environmental puzzles to solve. There are even collectibles to be found with which to create magic potions to improve combat skills or simplify certain missions.

The other aspect in which Marvel’s Midnight Suns differs enormously from XCOM is that of gameplay. Although both games are turn-based strategy, Firaxis had to rethink the game mechanics in order to be consistent with the context: Marvel superheroes never miss a beat, they don’t hide behind cover (or at least they rarely do) and rely on their forces both to defend themselves and to attack.

This translates into the disappearance of the square grid (similar to what Ubisoft Milano did with Mario + Rabbids: Spark of Hope), but also of the covers. Not satisfied, the Firaxis have also eliminated the classic organization of the turn: no longer a movement and an action per character, but a deck of cards to manage as needed. Initially you will have the possibility to play only three cards in turn, make a free movement and change two cards with as many random ones, but progressively you will have more and more options available, such as combo cards, others that do not consume actions if you KO an enemy, throw , blocks, area moves and much more.

From an apparent simplicity and little depth, the gameplay of Marvel’s Midnight Suns adds progressively new options, capabilities and variables, so as to make each team different from the previous one. Strange is able to boost the group’s attacks, Blade is a powerful attacker capable of healing himself, while Ghost Rider has several area of ​​effect attacks.

Hunter is the classic wildcard that will be shaped according to preferences and decisions made. He can be both an effective healer and a crystal cannon: powerful, but fragile. This depends both on the way in which his deck of eight cards will be composed (which mixes with that of the other warriors on the field), and on the relationship that binds the protagonist to the teammatesable to unlock further bonuses.

Already after a few hours we began to understand the potential of this system and, although we have repeatedly felt the lack of covers, a freer movement system and a more defensive approachwe believe that the more we go on, the more space there will be from this point of view, perhaps with the arrival of characters more inclined to this kind of thing.

We played Marvel’s Midnight Suns on PC, thanks to a pre-release that 2K and Firaxis made available to us. Although there are still several weeks left until December 2nd, the day on which the game will arrive on PC, Xbox One, PS4, PlayStation 5, Xbox Series X|S and Nintendo Switch, we were able to appreciate the cleansing experience. During the test, in fact, we rarely ran into glitches and problems similar to those that the XCOM series has suffered for years, such as camera problems or interpenetrations. Furthermore, without a verticality of the environments, the developers have also spared themselves the problems in managing the different levels.

For mobility reasons, we played it almost all the time on a laptop equipped with an AMD Ryzen 7 PRO 4750U and 32GB of RAM and we managed to get acceptable performance in FullHD thanks to AMD FidelityFX Super Resolution. The game is designed to run on older generation consoles and Nintendo Switch, exactly like XCOM 2, and therefore it shouldn’t be too surprising. This can be seen in the somewhat rigid animations during the dialogues or in the environments that are not very rich from a polygonal point of view. The art direction tries to hide thecross-gen skeletonbut the game will hardly be taken as a technical yardstick.

Obviously Firaxis has also looked at the latest news and thanks to the collaboration with Nvidia has included RayTracing functionality as well as the DLSS in the game. We still don’t know if these will also be exploited in the Xbox Series X|S and PS5 versions.

The musical accompaniment is excellent, as is the English dubbing. Reliable the Italian translationdespite the fact that some of the most ironic nuances of the game have been lost in the transition to our language.

Marvel’s Midnight Suns is an amazing product and a new demonstration of the talent of Jake Solomon and Firaxis. Despite the umpteenth evolution of the turn-based strategy genre towards something even more narrative and engaging, the Baltimore-based developer has managed to pack a solid and compact experience, suitable for both XCOM fans and those looking for an adventure Mavel different from the others. If the gameplay of Marvel’s Midnight Suns already seems solid after the test, the final evaluation will depend on the quality of the narrative, the variety and replayability of the experience and the exploration phase, currently the weak link of the experience.

Marvel’s Midnight Suns: we tried the new tactical RPG from Firaxis, the creators of XCOM