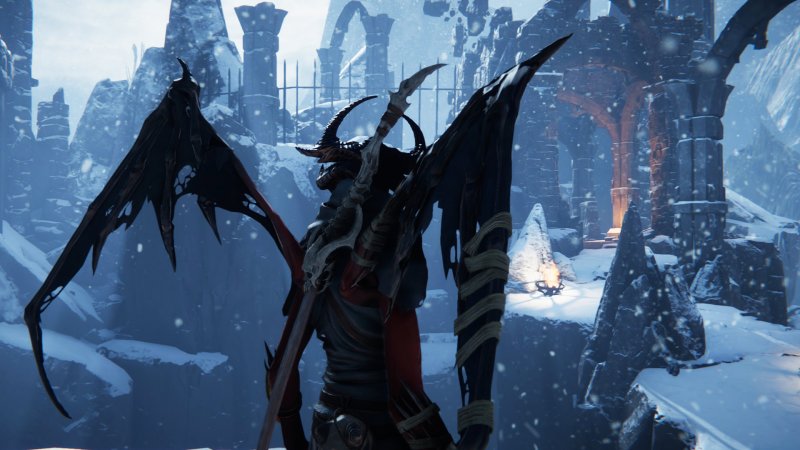 The review of Metal Hellsinger, an adrenaline-pumping shooter in which you shoot to the rhythm of metal music challenging hell and the quickness of your reflexes.

Mixing a rhythm game with a first person shooter, why hadn’t anyone thought of it before? Probably because they seem to be two worlds apart, so distant as to be practically irreconcilable. After all, many consider musical games with a certain sufficiency, relegating them to B series products. Yet this strange mix of genres can work, as you will understand by reading the review by Metal Hellsinger.

The Unknown, the protagonist of the game, wants to take revenge for some reason from Hell. She in particular she has it with the Red Judge, with whom she has an unfinished business and for whom she feels a deepest hatred. She is half demon and half human, so ours embarks on a journey through eight infernal regions, to get to destroy her enemy. For Metal Hellsinger, John Carmack’s adage applies that “The plot in a video game is like the plot in a porn movie: you expect it to be there, but basically it is useless,” which more or less describes the importance. which plays in the general economy of gameplay. Not that it doesn’t offer any interesting insights, but it just sits there like a cardboard backdrop, justifying the rhythmic massacre of hordes of infernal creatures, which aim to stop us.

Just launched, the title developed by The Outsiders begins to scream the authors’ love for the metal from each pixel. Ball music and protagonist who seems to come out of the cover of a death metal record in the title screen immediately make it clear where she is headed. It’s actually just the beginning, as we later learned by playing the tutorial.

The Unknown is a death machine, capable of terrifying his opponents, massacring them to rhythm… literally. Basically we are dealing with a first person shooter where you have to learn to shoot to the rhythm of music. The more you can track it when it hits, the more it feeds a damage multiplier that makes our attacks more and more lethal (up to 16x). When you fail to fire or when you are hit, the multiplier drops, weakening us. Out-of-time attacks still do damage, but are vastly weaker than rhythmic ones. The substance is that shooting wildly does not go anywhere, so much so that we recommend that you evaluate the game well, perhaps by trying the official demo, to those who might have difficulty with such a mechanic (lack of sense of rhythm is not a crime ). Consider that the entire Metal Hellsinger is built around it, including many graphics, both in the interface and in the maps.

There music is the core of the experience, as can also be guessed from some details of the game world: for example, the infernal torches move to the rhythm of the song of the level, in order to give the player a visual hint on when to shoot. The viewfinder is also built around the music and features pressure indicators. Finally, there is the music itself, a different song for each hell, which increases in intensity as the multiplier increases, coming to have parts sung when the 16X level is reached.

We confess that after some initial disorientation, we found ourselves lost in Metal Hellsinger and its dynamics. As we played we tried to keep in mind the rhythm (1, 2, 1, 2 and so on), to fire only at the right moment, in order to cause massive damage to floating skeletons, armed demons who shoot fireballs at us, ruthless behemoths, armored creatures, infernal insects and all other demonic creatures that populate the game. It must be said that it is not easy to succeed and that often, especially at advanced levels, we end up losing the so-called rhythmic series due to the overwhelming number of enemies. The important thing is to recover immediately, on pain of seeing the multiplier reset to zero or, worse, die, thus having to start the level all over again (as long as you don’t want to sacrifice some of the accumulated points to continue).

Learning to use is also fundamental the moves of the Unknown, that is the double jump and, above all, the sprint, the only one to allow you to dodge certain attacks. Of course, it is not easy to master everything by following the music too, but it is essential if you want to move forward. On balance it is precisely this difficulty that makes shootings particularly rewarding, when approached in the right way.

THE levels they are very linear and are structured in a very rigid way. Basically they are arenas connected by obligatory passages, in which it is necessary to eliminate all the enemy waves from time to time, and then move on to the next section. At the end of a level, be it an icy land, a ruined cathedral or the very center of Hell, you have to contend with the classic boss, that is, a very powerful creature with special attacks. In reality, the appearance of many bosses is practically identical, being the same creature that moves from one region to another, but fortunately the attack patterns change every time, so as to avoid excessive repetition.

There are several tools to help the Unknown. Meanwhile the weapons, which are very different from each other, while all maintaining a strong bond with music. For example, there is a crossbow that fires explosive bullets, which do immense damage if used in rhythm, or there are two guns that used rhythmically almost look like drum sticks, at least ideally. You can bring two for each mission, to be added to the two fixed ones, one of which is also the narrator (it is a skull that is recovered at the beginning of the game and which has its own specific function in the story). Each weapon has its own secondary attack of immense power that is loaded by performing rhythmic series (rhythmic kills) and which is often decisive for getting out of situations that are not exactly pleasant.

Technically Metal Hellsinger is a successful game. Sure, the graphics it does not stand out for details, but the enemies are well made and the levels, despite the basic simplicity, often manage to offer very beautiful landscapes, while remaining in most cases functional to the game system. Finally, the soundtrack is excellent, composed of metal songs that are used in a decidedly creative way, as you will have understood by reading the rest of the article.

Of his Metal: Hellsinger works and, if you let yourself be carried away, it also works very well. Shooting at pace can be particularly engaging, even if it increases the general difficulty not a little, particularly in the advanced levels. From here emerges one of the problems of the game: having to start the stages from scratch in case of death. The choice is justified by the presence of a score that ends up in a global ranking and is therefore understandable. Having to replay entire levels in case of final death, however, is not very pleasant, especially the final ones which are long. It is true that performing better and better performances is one of the reasons that pushes to continue playing even after the end, which comes after a few hours (it took us about 8 hours to finish all the levels, but the duration of the game varies a lot. depending on the skill of the player) so, even if it can be frustrating, it makes sense that there are no checkpoints and that it cannot be saved. The bottom line is that if you are looking for a fresh first person shooter with original mechanics, keep it in high regard.


Metal Hellsinger is certainly a successful title, which also has a potential weakness as its strength: so much can you get involved from having to shoot to the rhythm of metal music, making the fights almost like blood and lead concerts, so much can you be frustrated from not feeling free to attack wildly on some occasions, so as to be able to follow the frenzy of the moment. The involvement is therefore bound to the acceptance of this mechanic, which is decisive for the whole game, which if well received makes the whole experience of the highest level, for an FPS that, even with some limitations, manages to be loved on more than one occasion.

Metal Hellsinger, the review of a shooter played to the rhythm of metal