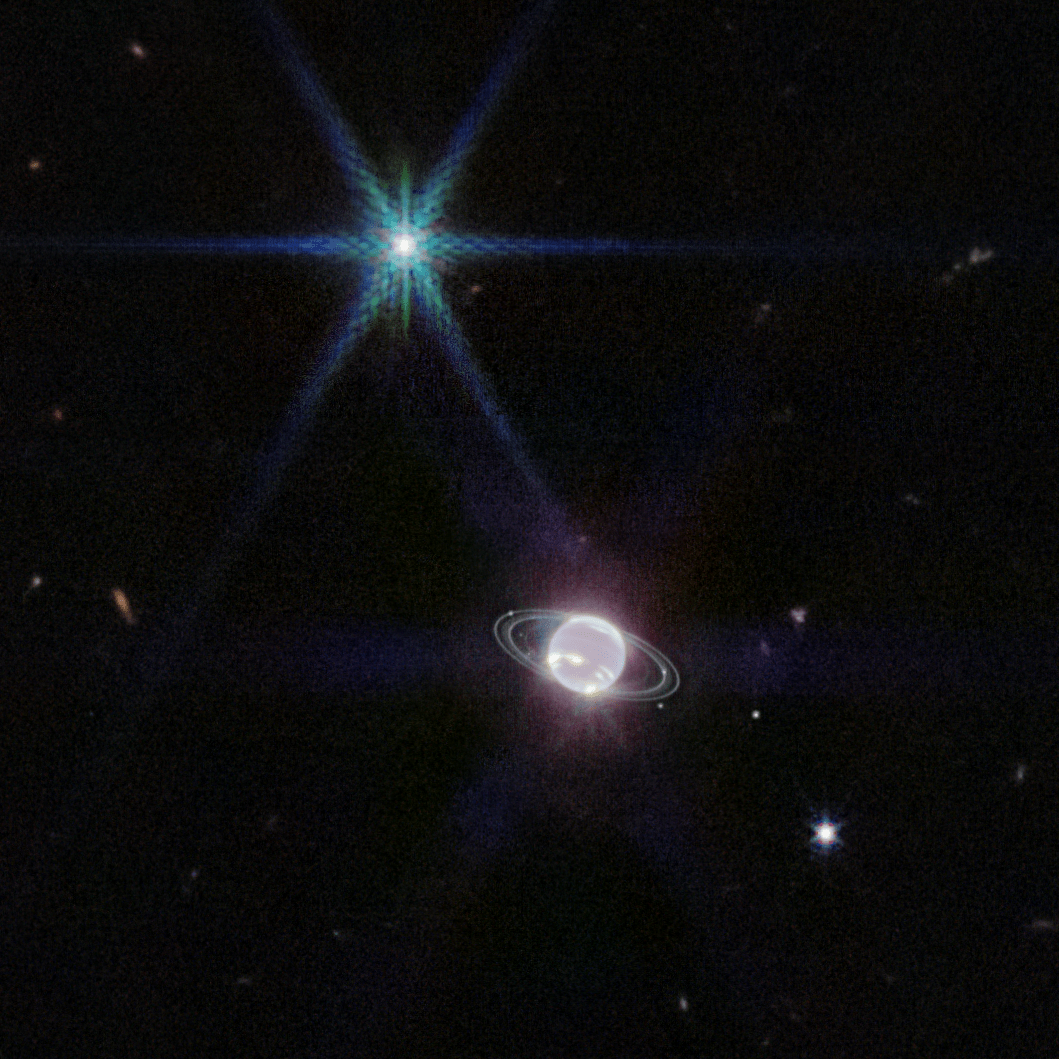 The James Webb Space Telescope (JWST), the largest and most powerful space telescope ever made, has observed the planet Neptune with the greatest level of detail among observations made in the last 30 years. The image clearly shows the rings around the celestial body and the characteristics of the icy atmosphere that surrounds it, with the highest clouds at -200 ° C.

Eighth and farthest planet in the solar system starting from the Sun, Neptune has 17 times the mass of the Earth and is considered an “ice giant”, with a different composition than other large gas planets such as Jupiter And Saturn. In addition to hydrogen and helium, common elements among the largest planets in the solar system, Neptune has greater quantities of ammonia and methane, while the inner part of the planet is composed mostly of rocks and ice. Traces of methane in the upper layers of its atmosphere help make Neptune appear a rather deep blue color.

However, in the JWST image Neptune does not appear blue as we would expect, because the telescope makes its observations in the infrared, the part of the electromagnetic radiation that we cannot see because it has a frequency lower than that of visible light. Infrared allows us to better grasp details and differences that would otherwise be invisible, such as the characteristics of Neptune’s atmosphere.

Being about thirty times the average distance of the Earth from the Sun, Neptune is located in the most remote part of the solar system and receives very little light. In broad daylight, the planet has a brightness similar to that of terrestrial twilight. It is this great distance that determines in part the very low temperature of Neptune’s atmosphere and makes it a “frozen giant”.

In the JWST image, the frozen methane clouds in the outer layers of the atmosphere are clearly visible, appearing much lighter than the rest because they reflect sunlight. A faint lighter line along the equator is also visible, indicating the atmospheric currents whipping Neptune. In the equatorial belt, the atmosphere is relatively warmer and therefore appears brighter than in other areas of the planet. A glow is visible near the north pole, as well as in the south pole area, where a long-known atmospheric vortex is concentrated.

The planetary ring system is among the thinnest in the solar system and there are various hypotheses about its composition and characteristics. The closest observations were made in 1989 by the Voyager 2 probe, which for the first time confirmed the presence of multiple rings. The images of the probe allowed to confirm the existence of five main rings, with an irregular structure perhaps due to gravitational interactions with the numerous satellites of the planet. 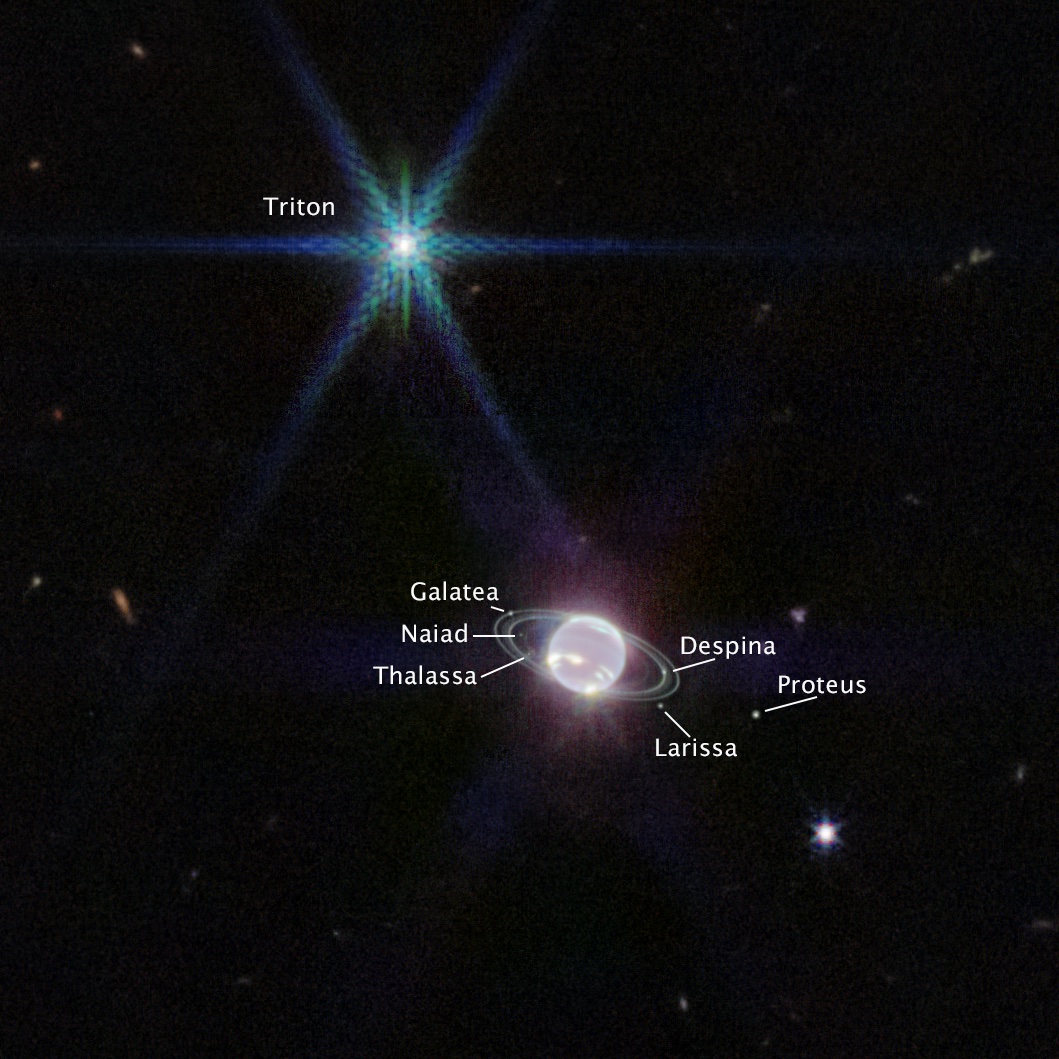 Neptune takes 164 Earth years to complete an entire orbit around the Sun, but in the long journey it is accompanied by at least 14 moons, observed and cataloged over the years. The most visible of all in the JWST image is Triton, the largest natural satellite of Neptune. The surface of this moon is mostly made up of frozen nitrogen and reflects 70 percent of the sunlight that reaches it. It is precisely this circumstance that makes it much brighter in infrared than Neptune.

The JWST sends the data on the brightness and light captured by its sensors to the Space Telescope Science Institute (STScI), which carries out an initial processing by providing files that can then be used by astronomers for their studies and analyzes. Space objects can be observed in infrared using different filters, calibrated to capture specific wavelengths. So you can to assign to each filter the equivalent of the pieces that our eyes can see. What has a longer wavelength – again in the infrared – can be translated into red, for example, while what has a shorter wavelength is translated into blue. By doing this, we can take the radiation from a part of the spectrum that our eyes cannot see and move it to the part that is visible to us. It’s a bit like raising or lowering the pitch of a song, so to speak.

Depending on the needs, this technique is used to highlight some elements and characteristics at the expense of others. The image of Neptune is calibrated to show the characteristics of the planets’ atmosphere and its faint rings. The data collected by the JWST, which in the coming years will be enriched with the observations of some of the planet’s moons, will allow new studies and research to be carried out on the most distant member of the family of planets that make up the solar system.