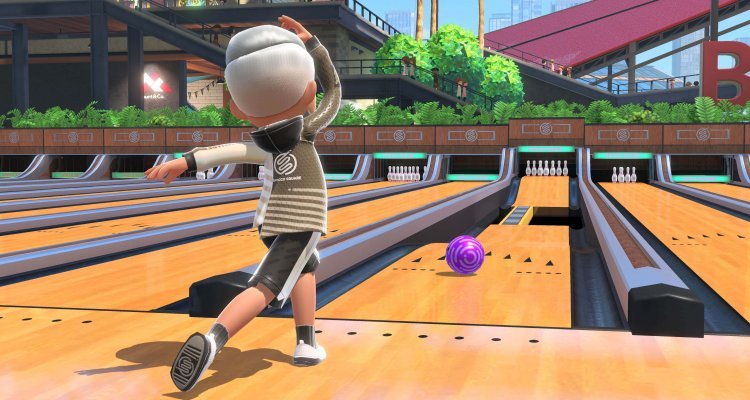 A few days after the publication, which we remember will take place on April 29, 2022 exclusively on Nintendo Switch, we have tried Nintendo Switch Sports what is in effect and without major surprises the heir of Wii Sports and Wii Sports Resort, two of the most famous games of the Wii period. If not two of the main architects of the success of that Nintendo console, thanks to their ability to penetrate market niches hitherto impervious to video games.

It is, therefore, a rather heavy legacy on paper, but which, in fact, is also quite simple to collect. In fact, 16 years after the first Wii Sports, this kind of light, fast and above all lively approach to sports video games is still fresh, also because products based on motion controls have gradually disappeared from the shelves creating a void that this Nintendo Switch Sports will prepares to fill.

The audience that might be interested in the game is potentially huge, making us wonder why Nintendo waited so long before producing a new Wii Sport. On the one hand we have, in fact, the nostalgics who will gladly return to tread the virtual bowling alleys of Nintendo, on the other hand, the youngest who, probably, have never been able to challenge relatives and friends to this kind of experience. Nor have they lived through the era when the Wiimote was the worst enemy of televisions.

The heart of Nintendo Switch Sports, as it was for its predecessors, is not in numbers, but in fun which is capable of delivering a few seconds after holding a Joy-Con. As per tradition, in fact, all or almost all sports can be completed simply by shaking a single controller in a very similar way to what will be done on the screen. In other words, for a tennis forehand it will be necessary to perform a movement from the outside to the inside with the arm, as well as for a dunk the arm will be moved from top to bottom. In some cases you can use both Joy-Con, sometimes to be held in the hands, others to be fixed to the leg through the band included with the on-board version of the game, which is the same as Ring Fit Adventure.

Thanks to simplification of the disciplines proposed, as always rather dry and in some aspects automated, and to the precision of the Joy-Con it is simple and immediate to get in tune with Nintendo Switch Sports, something that has always made the series very suitable to be played by people of all the ages. The tutorial that is before each sport, fortunately jumpable, explains in detail everything that can be done in the game, then the rest is up to the players.

As always, in fact, behind the superficial veil there is a certain degree of depth which allows the best players to do that little bit more than the newcomers. Which, however, will surprise the veterans by correctly mimicking the movements of the real disciplines or simply through some stroke of luck.

In other words i forehead flips they are always on the agenda and even those who are more gifted (you will understand better in the next paragraph) risk losing against those who are much less gifted (same as above).

Can 6 disciplines be enough?

Nintendo Switch Sports will arrive on Nintendo Switch with 6 different sports, that is football, volleyball, bowling, tennis, badminton and chanbara, to which golf will be added with an autumn update. This is a number that, on paper, would seem sufficient to guarantee several afternoons of fun, but that we do not hide, it disappoints a bit. It is true that the quality of the experiences must be considered, but after 16 years we would have expected a sort of compilation of all the sports created so far by Nintendo, not a selection between the two previous games. The first Wii Sports, in fact, could count on 5 disciplines (Tennis, Baseball, Bowling, Golf and Boxing) while Wii Sports Resort had 11 (Chambara, Frisbee, Archery, Basketball, Table Tennis, Golf, Bowling. , Motosurfing, Rowing, Cycling and high altitude sports). We emphasize, quality comes before quantity, but a greater effort from this point of view would have been greatly appreciated.

We took advantage of Nintendo’s invitation to preview Nintendo Switch Sports to bring one forward challenge on several fronts between the writer and the Editorial Manager of Multiplayer.it: Vincenzo Lettera. A challenge that has seen different battlefields such as Mario Kart, Mario Golf or Wario Ware and that will see its climax with Mario Strikers: Battle League Football.

Also in this case the competition was very balanced, with different front changes even within the same sport. The more technical, complex and noble disciplines such as volleyball and football were dominated by the writer, while the more nationally popular and simple ones such as bowling or penalties were won by the Letter.

The two team sports they are perhaps the most complex ones, since they require you to move your Miis on the screen, as well as perform different actions, even at the same time. It’s about jumping and hitting with the right timing, as well as controlling the stamina and not abusing the shot, as happens in football. This allows you to have a greater degree of tacticism and therefore have a learning curve of a certain type, which allows you to discover everything that is possible over time.

Even the bowling it has these kinds of characteristics but, being a rather faithful reinterpretation of the original discipline, as well as of the Wii Sport / Resort versions, it was easy to catch up with the effects and trajectories that can be imparted to the bowling ball. Penalties, on the other hand, are a rather basic discipline in which you only need to move the leg (on which the band is placed) with the correct timing.

On the other hand, the epilogues of Chambara and Badminton. With wooden swords in hand, the Letter initially used your Jedi techniques to enforce his will. After the initial surprise, however, our parenting experience took over. Imagining that we had a slipper instead of the Joy-Con, we began not only parrying the three types of slash that can be performed in Nintendo Switch Sports, but we began to strike with admirable precision and violence, which would have made grandmothers proud. .

Even the Badminton had a dominator change in the running. Despite the precision and beauty of our blows, it took a couple of distractions to land the shuttlecock and lose the match in the third set. In this case, in order not to make the game last forever, Nintendo progressively increases the force of the blows until one of the two players is forced to dive to save the blow, leaving the rest of the field free to the opponent.

The final challenge, therefore, took place on a tennis court tennis. Unlike the Badmington, in this case you have to control both players of the double (unless you play 4 and in that case each controls his Mii) and not only will you have to hit the ball with timing, but you can impart an effect and the direction. This means that you can also make mistakes much more frequently, by angling the shot too much or giving an effect to go out at the line.

And it is precisely on these details that the meeting was decided. On the one hand we had a player at the mercy of events who limited himself to hitting the balls, on the other a talent who created tennis, invented magical trajectories and showed endless class. Too bad this noble and vigorous attitude was not rewarded by the game, as several shots went off the pitch. A good sign for the future of the discipline, given that there is room for improvement, less for our challenge, won by Vincenzo who, obviously, has been making it difficult for us for days.

The only note to do is on the jokes. We do not know if it is our mistake or a lack, but it is not possible to have a great deal of control over this fundamental. Obviously, we hope this is not the case, as it would guarantee a higher level of depth to our games.

We came out of this test of Nintendo Switch Sports with the conviction that the new chapter of the Nintendo “sports” series has all the credentials to entertain as the original chapters did years ago and the potential to bring together many generations of different gamers in front of a television, Joy-Con strap tightly tied to the wrist. Accessibility, immediacy and movement, in fact, are a formula that worked 16 years ago as today. There is still a little voice in our head that asks us if something more could not be done in terms of the number of disciplines and their variety, but only the review will be able to give a definitive answer to this doubt.