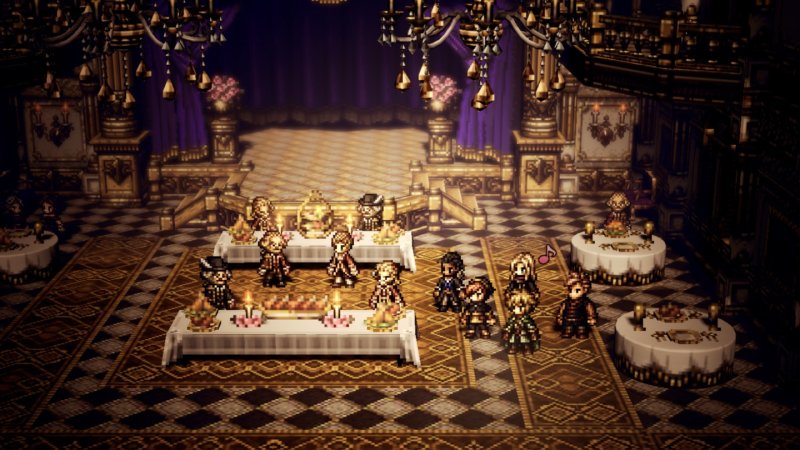 Square Enix brings the “HD-2D” series to mobile with Octopath Traveler: Champions of the Continent and is obviously a gacha RPG, as we see in the review.

The relationship between Square Enix and mobile gaming was quite complex until a while ago, starting with the first expensive and not too elaborate porting of old games. Lately, however, the house of Final Fantasy and Dragon Quest seems to have progressively increased its strategy in this area, embracing the latest trends with a certain enthusiasm. This does not necessarily lead to titles appreciated by historical users, on the contrary often on the contrary, but, as we see in this one Octopath Traveler review: Champions of the Continentgames centered more precisely on the dynamics of use and on mobile business models are emerging, which demonstrate the considerable mastery achieved in this area.

Unfortunately, this also leads to titles that depart from the historical tradition, for a publisher usually linked to types of games distant from these genres, but in some cases a convincing middle ground can come out. Considering that even the Octopath Traveler itself was a rather experimental project, perhaps this has favored its adaptation in this new form: its focus on the meeting of different characters along the way actually seems an invitation to decline it in the form of the RPG mobile gacha , even if this last characteristic always seems a kind of blasphemy, in the face of the more traditionalist JRPGs.

Square Enix has managed to exploit the idea in order to create a well-structured game in balance between its classical origins and the most modern trends of the mobile market, exploiting the charm of the world already built for the chapter on consoles and modifying its history and progression to place them in the new context. The result is convincing with regard to several aspects, such as the narrative, the setting and the combat system, but the distortions of the system gacha free-to-play however, they emerge in the long run, pushing towards even costly micro-transactions to get to the most advanced levels.

Characters in search of stories

Like the progenitor, the history of Octopath Traveler: Champions of the Continent focuses on its characters and changes based on the choices we make at the beginning about the characteristics of the protagonist. In particular, the initial part proposes three different roads with strongly different stories depending on the goal we set for our traveler: wealth, fame or power. Each of these desires opens a different path, leading to explore different environments and fight a particular antagonist, but all three are characterized by somewhat dramatic tones. Right there storytelling represents one of the characterizing elements of this game: although it does not shine in a particular way compared to other role-playing productions, the quality of writing is certainly superior to most mobile RPGs with gacha elements and this is already an important distinctive feature.

The system gacha naturally goes well with a game strongly focused on the protagonists and on the possibility of expanding your group, with over 60 different characters with whom you can get in touch, some of them with a narrative background to be discovered, in particular the protagonists of the various banners proposed progressively.

The summoning of the characters follows the standard rules of the genre, with different classes of rarity that correspond to the maximum reachable power: the drop percentages are in line with those typical of most gachas, i.e. minimum for five-star fighters that can reach the highest levels. It is clearly a system that pushes to microtransactions and technically it is a pay to win, even if the absence of any multiplayer PvP element at least avoids the most annoying drifts of this genre of games. The idea remains that the application of this solution, moreover with very expensive in-app purchases (up to 100 euros for currencies, 30 euros for 10 pulls of evocations) dirty a pure JRPG born with very different intentions, but yes he can say, if nothing else, that it is not one of the worst applications of gacha.

The tutorial is obviously long and tedious even in this case, but the menus appear quite clear and not too full of incomprehensible text or icons, which is quite rare in this type of experience. Perhaps the most positive element of Octopath Traveler: Champions of the Continent is the combat system, which appears drawn from the chapter on consoles with some variations mainly related to the progression of the characters and their management, but remained for the rest as deep and tactical as the original. Here too we have a party of eight fighters arranged in parallel rows of four, with the characters that can be swapped as needed and a “guard break” system that pushes to hit the weak point of the enemies using particular weapons or skills with a certain insistence, to then be able to concentrate on more powerful attacks through the boost system. Considering also the amount of different specializations (jobs) that can characterize the fighters and the various upgrades that open new slots for special abilities, in addition to the variety guaranteed by 8 characters on the field, it is easy to understand how the clashes are always quite stimulating, so much is It is true that the autoplay is not even taken into consideration, although the need to level up is not lacking.

The system of check on the other hand, it is entirely revised for the touch screen and is based on swipes and touches of the screen, since even the exploration – albeit conceptually free – is directed on very precise tracks that only require you to change direction with quick finger movements and is not provided not even support for controllers.

On the technical side, Champions of the Continent convincingly resumes it “HD-2D” style that has found so much success with the original, but there is still a general simplification especially in the use of 2D sprites.

It must also be said that the graphics system is rather expensive and in many cases the game performs an automatic downgrade to the lowest settings to try to maintain the performance (however not very high), and in this case the graphics undergoes a notable decrease in quality. In any case, the glance remains truly remarkable and the atmosphere is always pleasant and particular, also thanks to a really high-profile soundtrack. Finally, we point out that the dialogues (at least for the moment) are exclusively in Japanese and the text is all in English.

Light and shadow on this Octopath Traveler: Champions of the Continent, as was easy to expect from one of Square Enix’s many mobile RPG gacha-style adaptations. However, in the end the positive elements could overcome the flaws, as long as you have a little patience in leveling and don’t get caught up in the maelstrom of microtransactions, as it must always be remembered that the gacha mechanism is designed to steal money from users and this game also turns out to be quite greedy, in this sense. If you approach it with the right detachment (which does not necessarily mean not spending anything, but perhaps spending little and not regularly), this is a product with a charisma rare to find in this area, with well-constructed stories, characters and settings. and a real JRPG combat system, beyond the various technical limitations imposed by the mobile context.

Octopath Traveler: Champions of the Continent, the review of the new gacha by Square Enix