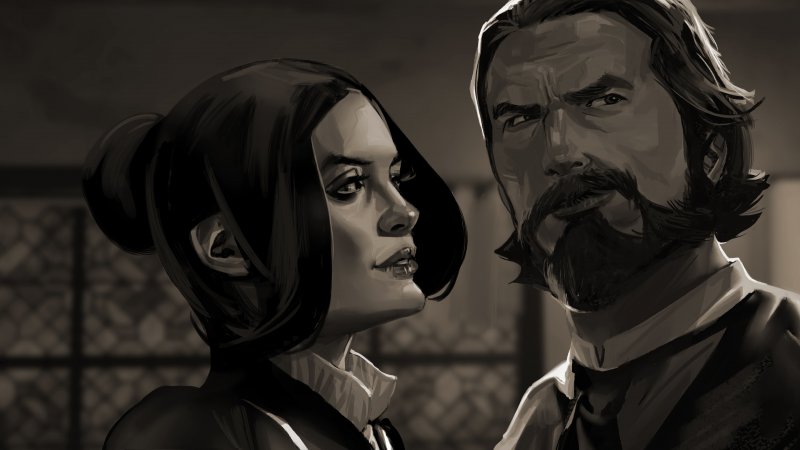 The review of Ravenous Devils, a management software in which you have to serve human beings to other human beings without attracting too much attention.

Two successful young entrepreneurs from the restaurant and fashion industry, Percival and Hildred, of those who fill social networks with motivational messages and complain about not finding employees who want to work for them for free, are forced to change their location often. company because of the originality of the ingredients used to make their dishes.

Unfortunately, the bigoted and backward society in which they live, immersed in a hypocritical and limiting politically correctness, does not understand the beauty of grinding or bagging human beings, and then serving them to their unwitting peers, always hungry and not interested in asking questions about the origin of their meals. Our goal is therefore to transform the Ravenous Devils review in an act of protest against the censorship of the art of this self-made couple.

With Ravenous Devils, the Italian software house Bad Vices Games, to whom we owe Hippocampus: Dark Fantasy Adventure and the more particular Sexual Void, has decided to create a decidedly disturbing experience, supported by the designer Mirco Pierfederici, who took care of the artistic direction, and by Troglobytes Games. On paper we are talking about a management in which we have to make Percival’s tailoring and Hildred’s restaurant fruitful, but in reality we are faced with a story that is strangely full of feelings, however perverse, in which the two lovers support each other for better or for worse. Especially in the bad.

In fact the whole game takes place in a single building divided into four floors and framed sideways: on one floor there is the tailor shop where Percival works, on another there is the kitchen where Hildred works and on the third, placed in the middle to the other two, there is the restaurant where Hildred or a waiter serve meals to customers (who obviously don’t know what they’re made of). The fourth and top floor is an attic where there is a greenhouse, useful for growing some ingredients for the restaurant (guess what they will be fertilized with?), And a room for luxury corpses (let’s call it that).

The turnover of the dynamic duo is very simple to explain: Percival sells clothes and kills people with scissors for Hildred, sending fresh corpses to her through a hatch that connects the interior room of the tailor’s shop to the kitchen.

Here the woman can grab the bodies and use them to make ground beef, sausages or steaks, which are the basic ingredients of restaurant menu. Hildred then has to take the ingredients and combine them with others on work tables, and then put the dishes in the oven to cook them, before serving them in the shop displays or at the pub tables. Initially, the ingredients are not all available, but they must be unlocked by purchasing improvements for the kitchen, so as to be able to create dishes of greater complexity.

Plus a plate it is articulate, the longer it will take to cook, the more customers will pay to eat it. However it is not only the restaurant that takes advantage of the death of some customers, because the clothes of the victims are an excellent raw material for tailoring. Percival can in fact use them to sew completely new clothes and then display them in the mannequins of the shop, for the use of customers.

In reality at the beginning of the game the restaurant and the tailor’s shop are very poor, but by spending the money accumulated during the working days it is possible to improve all the premises, buying the aforementioned new ingredients, adding displays and tables to the pub, increasing the mannequins on to exhibit Percival’s clothes and improving the work tools to speed up production. For example, you can buy more cooking tables or a more efficient sewing machine that makes clothes in a flash. In addition to equipping the rooms, it is also possible to buy new clothes for Hildred and Percival, just to give an extra touch to the scenario.

Given the theme of the game, it was inevitable that the player would also be told one history. In reality the narrative side of Ravenous Devils is very discreet in terms of how it intersects with the gameplay, handled as it is through cutscenes and letters.

There history it centers on the work of the two and on the fact that, despite their ability, someone has learned of their real business and wants to exploit it in a rather perverse way. In addition to the main story, there are also secondary ones, useful for revealing the more human and inhuman sides of the couple. These are moments that are not at all invasive, which do not distract from the management part, since they occur between working days and are not linked to particular mechanics. Once the story is over, in about five hours of play (not very few, considering the very low price), you can still continue to run the business.

In terms of gameplay, Ravenous Devils is paradoxically relaxing. The game does not include the game over and, although sometimes there are excited moments due to the overlapping of the various tasks, which are almost all managed directly by the player, at most you can disappoint some customers by not serving them anything so as to receive less fame points for the place at the end of the day. So the progression is constant and, even in the face of some mistakes, there is no risk of missing something along the way or failing. That said, the gameplay soon turns into a well-oiled mechanic, where the player runs fast from one character to the top during animations to give orders and spin the economy.

It doesn’t take much to understand how to manage the ingredients and make sure not to run out, even using unconventional systems to optimize everything, such as exploiting a kitten that, in the face of some cuddling, is well available to go hunting. of mice to serve to customers: a good quick meal that costs practically zero and is also quick to prepare, as well as nice free-range.

Of course, after a few hours the system begins to tire, especially when there are no more improvements to buy and the formula begins to get repetitive, but right at that point the ending arrives to close everything and to satisfy the thirst for blood of our two protagonists. and of us players.

From the point of view technician the Bad Vices Games title is made with great skill. Of course, it is very simple, considering that it represents only one environment and that some narrative sequences are entrusted to comics. In any case, the artistic direction is excellent and the animations do their duty, in particular those related to the killing and processing of the raw material. The few visible environments are well modeled and offer delicious details, which enrich the scene. Maybe the background music is a little too monotonous, but at the same time it is suitable for the type of game, so in the end it is hardly noticed.

The sense of so much death

At the beginning mince humans to serve them to other human beings transmits a certain restlessness, also given the details of the animations (that of slaughtering for steaks is particularly disturbing) but soon you get used to it and it becomes a relaxing practice, almost pervasive in its cruel beauty. When you have entered its ganglia and let yourself go, Ravenous Devils becomes a mirror of contemporaneity, within which you can gently sink, transforming the massacre into an economic, aseptically mechanical practice, in which the growth of profits corresponds to the increase of our ruthlessness. By playing we felt at peace with ourselves and we understood the greatness of a system that sends some to the pulp, for the serenity and satiety of others. We imagined the ladies entering our shop to buy a meat pie, politely wiping their mouths after eating it, burping quietly after digesting it not knowing they just swallowed their neighbor, the one who politely greeted all the women. mornings and they knew nothing about.

We dreamed of entering a store caravan of influencers budding ready to photograph the fruit of so much effort and make it viral, then we remembered that the era represented in the game had no social network and we were saddened. However, we felt like real entrepreneurs, those who sacrifice everything for the well-being of their company, even their private life, and we began to reflect on reality, asking ourselves where we are located in the food chain and if, in the end , we are on the side of those who mince, or on the side of those who are minced. The fact that in the meantime we kept turning the handle of the meat grinder without giving it much attention was a pleasantly revealing response.


We liked Ravenous Devils a lot, in its dryness and its focus on some essential mechanics, without ending up overdoing it in any way. Of course, in the end you realize that it is really very simple, but when that moment comes, it is almost finished and, given the price it costs, there is no complain. Indeed, we are happy to have lived an interesting and particularly bloody experience, one that is not seen very often in video games.

Ravenous Devils, the review of a management software in which humans are minced and served