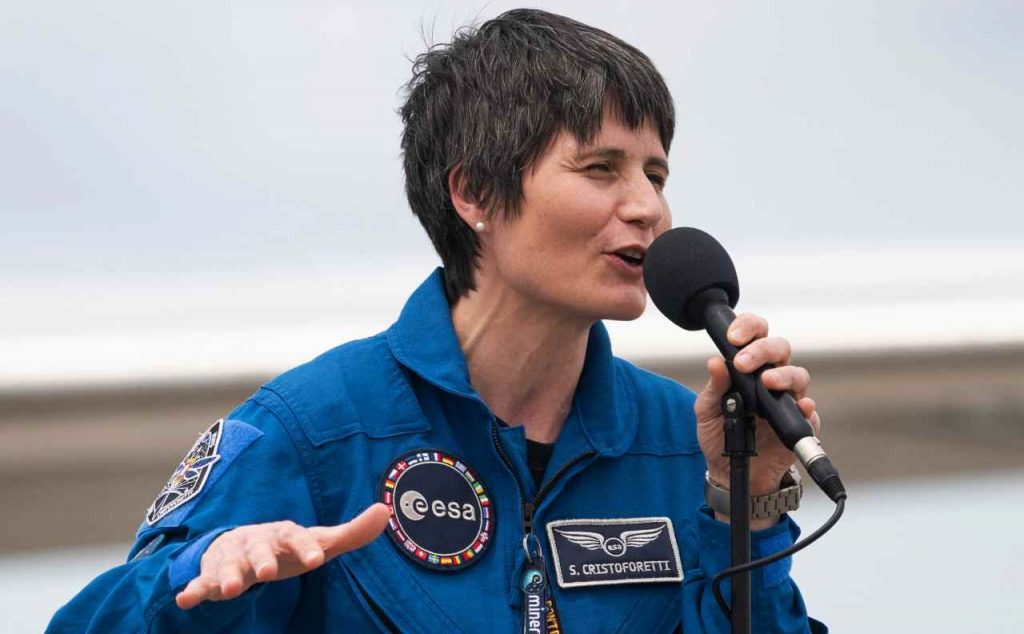 Samantha Cristoforetti was the first Italian woman to go into space and has therefore become one of the symbols of female emancipation.

Her recent photo of just disembarking from a mission greeting her children from behind a car window also went around the world.

In this article we will try to understand who Samantha Cristoforetti is and how much this courageous and well-prepared girl earns astronaut.

Born in Milan but a citizen of the world

Engineer, aviator, astronaut, first Italian woman to be part of the European Space Agency teams. These indications would be enough to make it clear who Cristoforetti is.

Samantha was born in Milan on April 26, 1977 but grew up in Trento, graduated from the Liceo Scientifico and already dreams of becoming an astronaut. A curiosity: among the sources of inspiration the famous science fiction saga Star Trek.

At 17, he left Italy to study in the USA, attending St. Paul’s Central High School in St. Paul, Minnesota. In 2001 he graduated in Germany from the Technical University of Bavaria followed by a master in mechanical engineering with particular reference to aerospace propulsion and light structures. Then he attended the National Higher School of Aeronautics and Space in Toulouse in France and then the Mendeleev University of Chemical Technologies in Moscow in Russia.

First aviator then a record-breaking astronaut

In 2001 she enrolled at the Aeronautical Academy of Pozzuoli, while in 2004 she obtained the 2nd degree in Aeronautical Sciences.

Thus begins to become pilot of the aeronautical academy, until obtaining the rank of captain. His experiences in this area are numerous by participating in many missions

In September 2009 he began training as a reserve astronaut for ESA, obtaining various very important specialized qualifications. In 2012 the assignment in the expedition 42/43 on the International Space Station, “Futura2 and becomes the engineer on board in the Soyuz TMA-15M.

After other months of training in various parts of the world, in November 2014 he began his first seven-month mission, the ISS Expedition 42/43 aboard the Soyuz to reach the International Space Station. It is a large interdisciplinary laboratory that specializes in scientific research, is jointly managed by 5 space agencies.

Samantha is the 216th person entered the Space Stationachieving the European record and the female record for staying in space in a single flight: 200 days.

Cristoforetti was recently aboard the “SpaceX” spacecraft, owned by the US billionaire Elon Musk, bound for the International Space Station. She was supposed to be the first woman from the Old Continent to command the ISS, but her role changed a few days after her departure.

The passion for Star Trek, the partner and the two children

Our Cristoforetti is, as we have mentioned above, an avid fan of the television series, which later became cinema, “Star Trek”. You even bought some uniforms of the legendary Starfleet!

Samantha lives with her partner Lionel Ferra, the couple has 2 young children, they have a home in Germany near the ESA astronautical center in Cologne.

But how much does an astronaut like Cristoforetti earn?

As we have seen from the professional history of Cristoforetti, becoming an astronaut is indeed very difficult. You have to study a lot and have a very strong organism.In fact, the absence of gravity has an impact on the body, in particular on that of women, which can lead to a rapid deterioration of the body. bone health.

Well, if you expect earnings from movie stars or rock stars, you are completely out of the way. The first to say it publicly was always an Italian astronaut, Paolo Nespoli.

And Cristoforetti also travels, in every sense, on those figures with an annual income of only 32-35,000 euros. Think that even when you are on a mission you only get an extra 20-30 dollars a day. In the US, wages are higher, but only slightly. The Russians, on the other hand, earn much less.

But there is no doubt that for Samantha it is passion that certainly does not command the wallet otherwise she would have chosen a career in some private airline earning much, much more.

To close a piece of news for those who had the same dream as Cristoforetti: the European Space Agency is looking for new astronauts, get in on it!

Samantha Cristoforetti: when does the astronaut earn records? Is a surprise