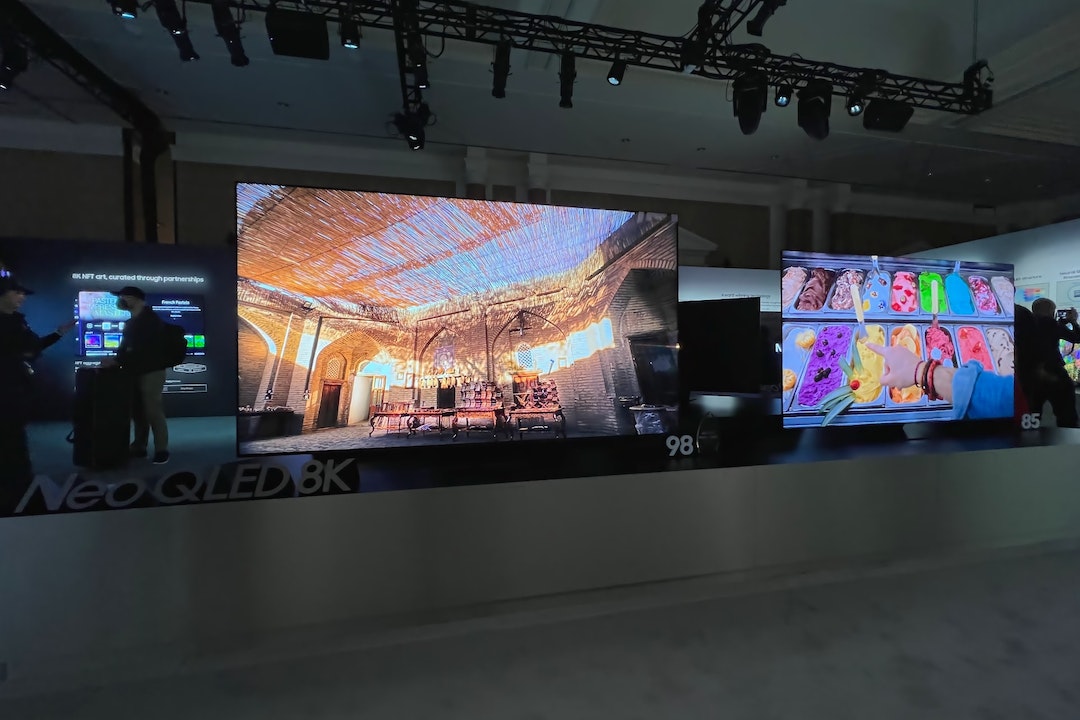 Samsung presented at CES 2023 the new range of televisions that we will see debut on the market in the coming months and which is divided into three main product ranges: in fact, the development of the Neo QLED models with MiniLED technology continues, the second generation OLED based on to Quantum Dots of Samsung Display, and continues the development of the futuristic MicroLED technology.

Like last year, the Neo QLED range will consist of 4K and 8K models with MiniLED backlighting. The first technical specifications do not speak of major upheavals in this area: like last year’s models, there is talk of backlighting with 14-bit light intensity control, and technologies such as Shape Adaptive Light Control and Real Depth Enhancer Pro, the first to offer local dimming functionality without blooming effects, the second to create a greater detachment from the foreground and background, improving the sensation of depth of the images.

The Neural Quantum processor is enriched this year by one new deep learning based feature called Auto HDR Remasteringand which basically converts SDR content to HDR using an algorithm based on artificial intelligence. And on 8K models, the neural networks integrated into the processor become 60 dedicated to upscaling full HD and 4K content to the panel’s native resolution.

The new top-of-the-line QN900C (the C replaces the B of last year’s designations) also features a slightly revised rear design, now with a sturdier metal panel, and in the case of the 98in there are two additional “elevation” channels for Dolby Atmos, for a 6.4.4 sound system.

As for the second generation of OLED TVs from Samsung, the main novelty concerns the arrival of the 77-inch cut which joins the 55 and 65-inch cuts, thanks to the new panel made by Samsung Display. We are of course talking about the QD-OLED technology, based on a blue OLED emissive layer, with a Quantum Dot layer for converting blue into red and green.

Samsung’s 2023 OLED models will actually be two, the S90C and S95C. The first replaces the 2022 S95B series, keeping the same design, but also adding the 77-inch cut. The S95C series instead introduces a design similar to that of the Neo QLED range and in particular the 8K one.

The new 2023 models now officially support the maximum refresh rate of 144 Hz and are also compatible with FreeSync Premium Pro as well as Nvidia G-Sync, but at the moment, apart from the design, we do not know in detail the differences between the two series, even if Samsung tells us there will be performance differences of some kind as well.

The most important novelty, at least from a purely technological point of view, is the arrival in 2023 of a very large range of televisions in MicroLED technology. Samsung has indeed brought to CES the new generation of MicroLED screens with sizes ranging from just 50 inches up to 140 inches.

To be precise, in 2023 Samsung intends to bring models with a diagonal of 50, 63, 76, 89, 101, 114 and 140 inches to the market. We had already seen some of these at the Samsung stand at IFA last September, but the new 50 and 63 inch sizes are totally new and represent a very important step forward for technologyconsidering the level of miniaturization needed.

The new MicroLEDs are the result of the new production process which sees the integration of the MicroLED chips on a TFT substrate and a new chip transfer technology which works on entire rows at a time and which allows for faster panel assembly. At the moment we still don’t have any price indications on the new thumbnails, but on availability this year Samsung is confident of being able to bring the new models to market within the year.

Getting closer to the screen we could see by squinting that the panels are still made up of tiles, but to see the seams you really have to get close to the screen and wait for the right content. At the moment there are no known technical characteristics such as brightness, consumption or supported functions.

As for the Smart TV platform, the most important novelty for 2023 is certainly the support for the new Matter standard within the SmartThings hub. The new 2023 range of televisions in particular will be able to communicate natively both via Thread and Zigbee with all compatible devices, without the need to use external hubs, becoming a control center for IoT devices, including third-party ones.

In the coming days we will have the opportunity to further explore the news relating to the new range, so keep following us.

Mars 'quiet water'
Trony flyer "Get 3 Pay 2" 31 Oct - 21 Nov: the discount is also available for those who take 2
WhatsApp, if you have to uninstall it don't make this mistake I You waste a lot of time and lose eve...
Tweet
Share
Share
Pin