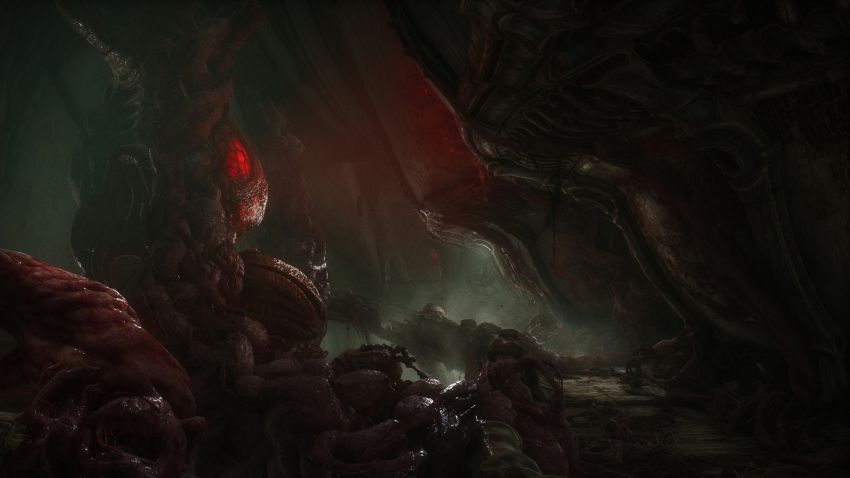 In a wasteland, rotting and rotting, an imposing fortress rises up masses of blood, entrails and corpses. A non-place, out of time and space, of which we cannot know anything, except that we are in a place where life has liquefied between pipes, cables, machinery and biomechanical gears, enslaved only to feed the beating robotic heart of this immense castle-prison. Yet, among the heaps of carcasses locked up and packaged to be offered to the slaughterhouse of some kind of obscure production system, a body rises from the mass gravesdeviates from the predetermined path of this perverse and purulent assembly line and begins to walk towards a possible and feared freedom.

This is Scorn, the new first-person horror adventure developed by Ebb Software and coming to Xbox Series X | S and Game Pass. An enigmatic, mysterious and disturbing work, imbued with a macabre and sick charm, of which we have been able to test a first proof version that we are finally ready to tell you about. From the Gamescom 2022 pavilions, on the occasion of our meeting with the developers to play a build, to our virtual pages: get ready to discover a rotten and visceral horror different from usual.

Horror, in Scorn, is metaphysical, intangible. It is not a concrete threat, not a real presence that oppresses the protagonist’s twisted journey. It is not, at least during the first 50 minutes of the game: our test lasted so long, enough time to understand what to expect from a production that could turn out to be different from what you expected.

That of the upcoming Microsoft exclusive is a horror frame built entirely on the atmosphere, on the silence of a fortress made of corridors and interlocking machines, which look like scary instruments of torture, on getting lost in dark tunnels with nothing but the thunder of our footsteps, with the echo that our bony and fleshless feet produce in the shadow of putrid pools, ambiguous hooks, sharp protuberances and endless ravines.

On this level, Scorn looks like a work that smears its vaguely sci-fi setting with a pushed and extreme body horror, in symbiosis with a playful mixture that involves the sacrifice of meat – one’s own or that of others – to trigger the mechanics. There is no explicit narrative in Scorn, if not an emerging tale, like the purplish blood that gushes from the throbbing and torn veins of a body like ours, which evidently longs for life. In short, the “story” has told us everything and nothing, and our impression is that the script remains enigmatic and indecipherable until the end credits.

Making your way between bodies and machines

Ebb Software’s game catapults us into its world without providing us with explanations or tutorials on how to navigate this bleak biomechanical maze, with the sole purpose of exploring the enormous structure from which we must escape. And it is up to us to discover how to exploit the environment to our advantage, opening portals or activating gears that little by little mark a small step forward towards the coveted freedom, or perhaps towards the discovery of a terrible and perverse truth.

You will feel disoriented, lost in a sprawling labyrinth, with nothing but the skeletal and worn hands of our avatar, necessary to activate the various tools placed in front of our passage. Scorn is basically an adventure made of puzzles and riddles to be overcome with ingenuity and wit, making use of one’s limbs and connecting one’s organism to that of machines. But not everything is within our reach right away. The feeling of getting lost and not knowing what to do, at least at the beginning, pervaded much of our soul, as we walked through corridors and rooms, stumbling upon blocked doors or inaccessible streets. Up to an immense circular room, made up of other contraptions, crossed by tracks and trolleys, with an imposing altar in the center from the top of which it was possible to change the composition of the space below. We continued to explore, offering our wound-strewn flesh in vain to the pointed crevices of the most bizarre machinery, until we came to an area where we discovered that we were not the only sentient life forms, making the whole picture more conscious. of our wandering.

Once the necessary elements and objects were obtained, it was then sufficient to go back to the previous steps, take old corridors, visit areas already explored, and gradually gain knowledge of what to do, which steps to unlock or which tools to use.

Scorn seems to be essentially this: an adventure experience at the limits of the walking simulator focused on overcoming puzzles, with a pool of commands reduced to the bone. The player is mostly required to press a button and operate machinery, and then use the analog sticks to move various elements of the screen in a series of interlocking challenges, in which use carcasses and monstrous clusters of entrails as a source to power the various gears. . 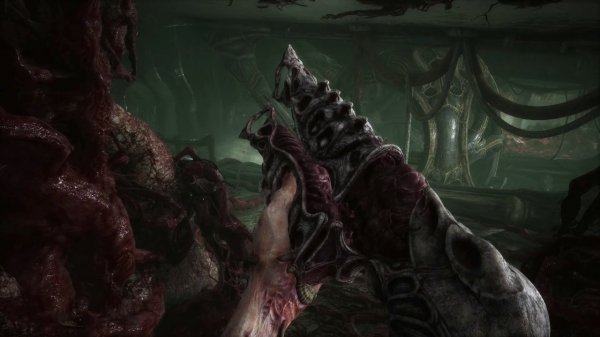 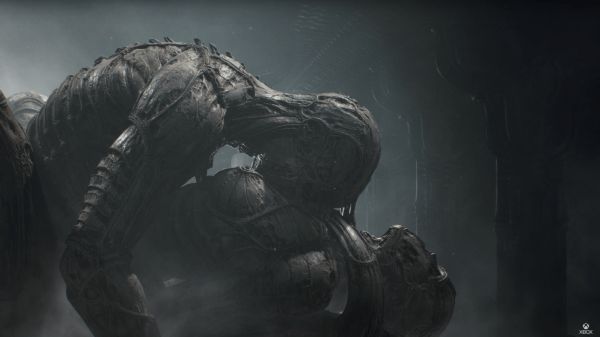 So let’s talk about a gameplay that reflects the disturbing setting of a corporal and biomechanical horror inspired by the artistic currents of Giger and Beksinski – two famous surrealists of the twentieth century. The result is a product that, at least at first glance, seems slow and limp in rhythm, mostly centered on its dark and vibrant dystopian atmosphere. In this first part of the game there seems to be no room for action, if not for some rare situation: in a more advanced point of the demo, for example, we came into possession of an instrument halfway between a key and a rifle, which in addition to activating particular devices was also useful for attacking at medium range .

In fact, once we reached a specific area where it was necessary to get around some mysterious cocoons, we had to repel curious ovoid-shaped creatures, destroying their shells to prevent their spores from dispersing into the air, poisoning us.

For now we are not allowed to know if, continuing on our journey, it will be necessary to fight in the true sense of the word; however, being our avatar with a health, it is possible that the meanders of the structure hide some sprawling monstrosity ready to give us a hard time. Our time in the company of Scorn has left us, in short, mixed feelings, but it has been able to intrigue us. Because if it is true that the work of Ebb Software seems to sacrifice rhythm and action in the name of a gameplay focused mainly on the atmosphere, on the other hand the playful proposal of the new Microsoft exclusive seems to us courageous and fascinating. Much of the credit certainly goes to the evocative artistic direction, well supported by the disturbing and sick tones of a gloomy and rotting imaginary. The feeling, however, is that Scorn may turn out to be much more intense and twisted than what is shown in this long prologue: all that remains is wait for October 21 when Scorn will be released on PC and Xbox to discover the secrets of Ebb Software’s production.

Scorn: We played it, it’s creepy and sick!