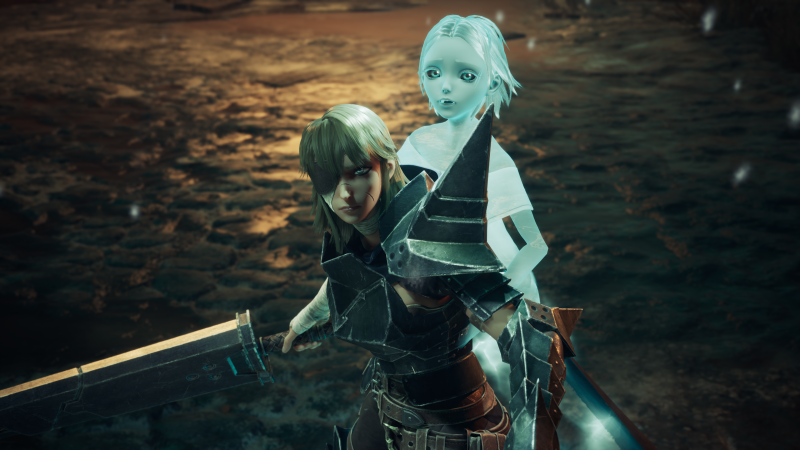 With great pleasure, we find ourselves more and more often to affirm that the Italian videogame market is more and more flourishing of creative and willing developers who want to have their say in front of the whole world. Today a new boot project joins the list that, over the last few months, we are sure many will have kept an eye on: Soulstice.

Already authors of Theseus and Joe Denver’s Lone Wolf, the Italians of Reply Game Studio have been offering this action game from 20 September 2022, inspired by classics like Devil May Cry and Bayonetta, on PC, PlayStation 5 and Xbox Series X | S.

We’ve already told you about it on a couple of occasions, after putting some demos to the test, and now we’re finally ready to tell you what we think of the final version.

If you’ve reviewed your combos and are ready to find out everything there is to know, keep reading ours Soulstice review.

Two for the price of one

Soulstice tells us about Keidas, a Sacred Kingdom in which the real and the spiritual world are separated by a thin Veil. By tearing it apart, we risk bringing destruction into creation and, to prevent this from happening, we rely on the Chimeras, or two people who, through a ritual, merge into one. The body of the first accepts the soul of the second, thus obtaining higher abilities. The protagonists I am really a Chimera, made up of the souls of two sisters: Briar and Lute. The first is the character we control, while the second acts as a sort of guardian spirit, both in the fights and narratively, as it is the voice of reason of the older sister, more daring and impulsive.

The couple is sent to Ilden, where one has opened Gash, which has caused the transformation of all humans and animals into deformed and insane creatures, who obviously will only want to tear us apart. The plot revolves around the partially monstrous figure of the Chimeras, the past of the two sisters and the secrets of the sacred order of which they are part. In a dark fantasy world, of course, nothing is really spotless and from above the machinations involve the smaller gears like Briar and Lute, which will be able to exceed expectations and prevail, of course.

Overall, even if faced with a pleasantly designed world, the Soulstice plot it is quite obvious and does not represent the strong point of the package. The twists, if we want to define them, follow one after the other, but all quite phoned and predictable. What is not completely convincing is not so much the general plot, as much as the minor sequences and even more the exchanges between the two protagonists.

Soulstice struggles, in fact, a give depth to the two girls in terms of character and most of their dialogues are a copy of the previous one, from the beginning to the end of the game: it almost seems that besides “things are getting worse, we have no choice but to go on, together we will make it” the duo we have nothing else to add. Out of the plot highlights, Briar and Lute struggle to thrill the player.

The repetitiveness is then felt from another point of view: thesetting, as mentioned, it is a single city, with a medieval style. It is an immense place, built vertically starting from the piers up to the uptown and the temple, like a sort of acropolis as high as a mountain. Unfortunately, however, the bulk of the areas are stone rooms, sterile living areas and sewers. In the final stages the team dared a little more, but very often it seems to be not really advancing because each area seems identical to the previous one. To be honest, there are clearly entire repeated spaces (in a clever and logical way for architecture) but, also thanks to a very narrow color palette, Soulstice tires the player’s eye a bit, also because there is very little unique and stylistically interesting in the environments, too generic as well as repetitive. At least, on a technical level, Soulstice defends itself well, obviously considering that we are not talking about an AAA production: what matters is that the frame rate is stable even with high details and the action is fluid and without hiccups.

Even the design of the most common enemies did not particularly convince us. They are mostly humanoids of various sizes and shapes, but always very similar and uninspired in detail. Between enemies and the environment, it is all a gray-brown that bores after a few hours. The only chromatic boost is represented by the fact that some enemies are blue and some red, as they are linked to the “Fields” that can be activated by Lute, which we will talk about shortly. Basically, don’t expect to be particularly impressed by the enemies, who are far from the variety and fantasy of the creatures faced by Dante or Bayonetta.

Up to this point, we haven’t painted Soulstice in a particularly positive way, we admit it, but one thing must not be forgotten: it is a action game and the biggest reason why many will buy it is the combat system and, from this point of view, the Italian opera defends itself very well.

Let’s first look at the basics of combat system. Through Briar we have control of the attack, while through Lute we have power over the main defensive capabilities of the couple. Briar works as you can expect: it has a main weapon, a sword, and a series of secondary weapons (six, at the end) that are distinguished by range, speed, effectiveness against certain enemies and some unique moves, such as the ability to use whip it like a grappling hook at an enemy or spin the war hammer at a wide radius.

The singles weapons have a few combos, all with the same structure. Even without reaching the depth of a high-level Devil May Cry, Soulstice still defends itself well from the point of view of the paraphernalia and the fundamental structure of the fights. You sprint, raise enemies from the ground, ring combos, switch weapons quickly and maximize damage, while giving priority to the variety of moves performed.

In fact, Briar and Lute have a Cohesion which, if maximized, allows you to activate a short state of berserk, called Furore, which makes it very powerful and fast and allows you to activate a destructive final move. If you constantly change weapons, take no damage and attack without interruption, you can also activate the Fury multiple times in a fight (if long enough).

Added to all this is another mechanic, that of Fields. Lute can create colored domes – blue and red – that make certain enemies of the respective color vulnerable, otherwise impossible to defeat. The Camp cannot be activated indefinitely, under penalty of the loss of Cohesion and the temporary disappearance of Lute, so you must always be clear against who you are fighting, activating and canceling the Camp quickly.

Finally, it must be considered very carefully Lute. The spirit takes care of attacking automatically, becoming more powerful as Cohesion rises, but above all it allows us to manually activate defensive moves. Any enemy that is about to attack us can be blocked by pressing a dedicated key, even when we do not see it (the input icon is shown at the edge of the screen). This means that you must always keep an eye on the big picture, looking not only at the closest enemies and those we are hitting, but the whole screen in order not to miss the opportunity to block the opponent, who is pushed back or slowed down depending on of the type. Acting in defense as well as in attack speeds up the accumulation of Cohesion and therefore makes us stronger. Lute is also the most customizable side of the couple: the spirit has many skills that allow us to have a more aggressive and risky approach to combat, or to improve our survival. Skills can be repositioned at any time, so you can safely experiment.

Soulstice’s combat system rewards balance, speed and precision. It is therefore a pity that, on average, the camera struggles to follow the action, especially in the narrowest spaces where it easily fits into the corners of the rooms. Adding up the amount of elements to be taken into consideration, every now and then it can happen to have a little difficulty in keeping up with what happens on the screen. The developers propose a “lock-on” targeting system that many will know for souls-like, but it is not always an effective solution with such a fast game and sometimes you waste more time trying to lock the camera on the right enemy than to defeat him.

Clearly, you don’t just spend time fighting. Soulstice intersperses the battles with completely narrative phases, exploration and collection of resources, as well as small puzzle-platforming sections that require you to destroy some blocks that prevent you from progressing. The rhythm is excellent and you move from one section to another without ever making each component weigh too much. Were it not for the aforementioned repetitiveness of setting and dialogues, Soulstice would flow with great pleasure.

To close the picture are the bossfight, some of which are tied to enemies who then become “common” adversaries. However, there is no lack of unique clashes, on average well structured and intense, divided into several phases. Too bad that the villains are of little impact at the narrative level, but at least as a visual design they far exceed the basic enemies. The soundtrack is also pleasant, especially in the most important clashes, which loads the player and accompanies the rapid rhythm of shots and dodges. The dubbing is instead without infamy and without great praise.

Finally, we point out that one can be expected minimum longevity fifteen hours, which increases for sure if you want to replay to find the upgrades and secondary challenges (battles in arenas, with special conditions) not completed on the first round. In addition, each battle and chapter receives a score, so you can play over and over on each difficulty to get the maximum.


Soulstice is first of all a technical action game a la Devil May Cry and, while not reaching the peaks of the genre, it defends itself very well and knows how to entertain. The variety of weapons and situations is discreet, but unfortunately the setting repeats itself too often, boring the player’s eye. The plot is accurate even if not original or exciting, but it does its duty. If you are looking for a game that lets you have fun with controllers in hand, you have found it. It is a first step, mind you, and there is room for improvement in view of a following, but perhaps for this reason it would be worth supporting an Italian team that has something of its own to say.


We have our social media profiles here as well as other related pages herehttps://prress.com/related-pages/