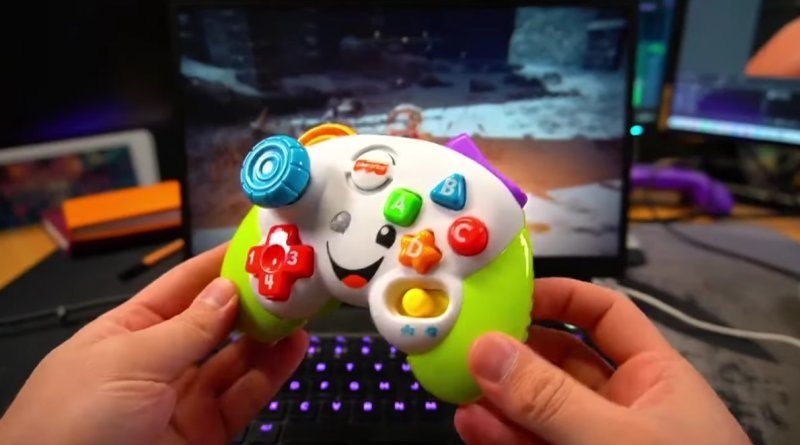 When the going gets tough, some players make it even tougher – we discover five of the craziest controllers used to play Elden Ring.

Let’s face it, Elden Ring already puts its own effort into making things difficult for those who venture into its territory: as per tradition, in fact, the latest addition to FromSoftware gives its best when it comes to making the gaming experience thorny. to users. If we then consider that some of them also end up devising, for sheer taste, further findings from shooting in the foot, here we are already in the field of masochism.

In this article we are going to take a look at the 5 strangest controllers to finish Elden Ring. A roundup of methods designed to manage the control system that touches the boundaries of the illogical and that every time automatically raises a poignant question:

Someone has probably said that Elden Ring is child’s play and Dylan “Rudeism” Beck must have taken these words a little too literally. The New Zealand streamer has in fact faced the latest From adventure with a Fisher Price gamepad duly modified in Xbox style, following the challenge launched by a user.

Screw here, replace there, and the kid’s controller transforms into an instrument of war ready to shed blood, but with a small peculiarity: the sound effects they are still the original ones. The result is an alienating mix between the seriousness of the actions that the character performs on the screen and the cheerfulness of the nursery rhymes that come out from the speaker of the peripheral. It might sound funny but think about it: in Elden Ring, a wrong movement or action could correspond to certain death, accompanied in this case by a sparkling song.

That’s right: ten minutes and we’d throw it out the window.

Assuming that the author of this article manages to get out of tune even when the intercom rings, here, try to imagine him facing the threats of the world of Elden Ring holding a guitar. In short, an announced tragedy.

Yet there is someone who has attempted the enterprise to the sound of plucking and chords: it is SuperLouis64, a Texan modder who transformed Guitar Hero’s guitar into a controller with which to guide his alter ego through the Interregnum. The body of the instrument is entrusted with the commands relating to the skill of the weapon and those useful for moving back and forth, jumping and healing; while the handle houses the keys that are used to move left and right, to dodge, attack and lock the target.

Has your dream always been to mow down demons and other abominations while feeling Jimi Hendrix? No, not even ours in fact, but that doesn’t mean it can’t be done.

How do you say? Ah, do you want to hear from Giovanni Allevi? Well you can do that too.

Several users actually enjoyed connecting one keyboard at the controls of Elden Ring so you can control your character by pressing the musical notes. In each of these cases, what comes out is a musical achievement worthy of a mid-century Czechoslovakian intimist film, which ties into the game’s sound effects for a more unique than rare cacophony blend.

Yet, come to think of it, the control system is not that far from that of one normal PC keyboardand it could also be a good way to fool our parents in the next room into believing that we are practicing the piano rather than wasting time on video games.

With your hands, with your head, with your feet … The Representative of List sings, but more than a song it seems the list of more absurd ways with which the people of the web decided to tackle the latest work by Hidetaka Miyazaki.

Although it is not dead, at least for us the Dance Dance Revolution series is now far from the limelight of a few years ago, evidence that however does not represent a valid reason to set aside the legendary dance pad homemade. Some players have in fact stubborn to want to risk not only the skin but also the meniscus in the wastelands of the Interregnum, controlling their warrior through commands given with the feet.

Needless to say, for most of us it would already be a great achievement not to make our buttocks meet the floor, but on the web there are those who even defeats bosses he was not even dancing hully gully smoothly.

Who we are? Where do we come from? Where do we go? But above all: what prompts a player to connect the Elden Ring controls to a helmet of truths bananas to press and then try your hand at the adventure in this way?

Here, we will probably never have a satisfactory answer to the last question, so let’s limit ourselves to commenting on the idea of ​​SuperLouis64 – that’s right, again he – who has seen fit to assign each banana a game command. Do we want to move forward? Just press the banana on top. Backards? The one below. To jump? A banana shot to the far left and so on. Without forgetting that there is even a special banana to summon Torrent.

In short, the setting appears as comfortable as a bed of nettle and seems to transform the user into a DJ engaged at the console, or at least into a congas player. We honestly struggle to imagine one more set up crazy of this: it is therefore appropriate to say that we have arrived at fruit.

And you? What other wacky controllers to squeeze Elden Ring with have you seen around? Let us know in the comments below.