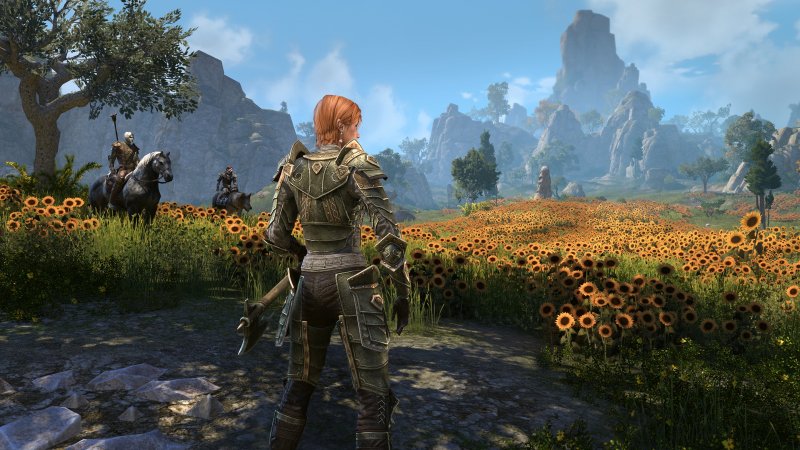 The Elder Scrolls Online is updated with the High Isle DLC, here is our review of the expansion dedicated to the Breton islands.

We are sure it may be the same for some of you, but now almost 11 years after the last original chapter of The Elder Scrolls saga, we must admit that being in the fantasy universe that Bethesda Softworks has built with its open world RPG missing terribly, even more if we think about the fact that it is still very early to receive some information on the sixth chapter of the series. The company is in fact focusing all its resources and energies on Starfield, and since the role-playing games at Bethesda are not exactly easy to develop, there is a serious risk of returning to Tamriel only towards the end of this. decade.

Although there are substantial differences between the two titles, what many ignore is that the legacy of the saga is actually carried on with great pride by The Elder Scrolls Online, the MMO now in its eighth year of activity. progressively expanded to now offer an almost totally explorable Tamriel, from the granite towers of the Imperial City to the snow-capped peaks of Skyrim, from the forests of the island of Summerset to the volcanic slopes of VVardenfell.

After a couple of DLCs that had led the adventurers of the MMO of ZeniMax Online Studios to fight powerful daedra in the plans of Oblivion, the game is now preparing to welcome a new expansion with a completely different flavor, set on the beautiful Breton island of High Isle, characterized by delightful Mediterranean panoramas and luxurious castles.

There is an air of holidays, and just like a tourist guide with an umbrella The Elder Scrolls: High Isle review will take you to discover all the beauties of the island, also telling you about the news coming with the expansion. Did you put sunscreen under the armor?

What can you expect from a Breton, if not politics?

The expansion is not limited to concentrating its range of action within the borders of the island of High Isle, but will rather allow you to explore most of the archipelago of Systres, a commercial reference point for the naval routes that circumnavigate the continent. The strategic position of the Breton ports, but even more their total neutrality in the War of the Three Flags, makes the archipelago the ideal place for the intricate interweaving of the politics of the three Alliances, in which we will find ourselves immersed from the very first bars of the main plot. Forget the epic of the latest expansions, in the history of The Elder Scrolls: High Isle we will be thrown into a complex political thriller whose antagonists do not jeopardize the survival of Tamriel, but only the fate of the High Isle and its sister island Amenos, a prison colony covered by a thick jungle and populated from all kinds of criminals.

The tone of the adventure is therefore much more relaxed than in other DLCs, even if after a few hours of play we realize that our intervention will still have an impact on the destinies of the inhabitants of the continent. The prominent nobles of the bay of Gonfalon have lost one small fleet of ships which was carrying an extremely precious cargo, and as expected we will have to shed light on the mysterious disappearance, having to deal with a large cast of secondary characters characterized properly. The plot is quite enjoyable, and although it proceeds without particular twists and in a very linear way, in our opinion it can be appreciated by that part of the community looking for an undemanding single player narrative experience. Veterans have never been completely thrilled with the attention that the latest expansions have reserved for the more casual user group and newbies (who without ever starting TESO can enjoy the expansion just like the others), and in this sense they could instead badly digesting another expansion that does not bring particular gameplay novelties (such as new classes or skills) to focus on the narrative.

As expected, The Elder Scrolls Online: High Isle does not want to leave anyone speechless in any way, and therefore, in addition to the new 12-player trial, we report the presence of two new companions, Ember and Isobel, who can be found on the game map among the dozens and dozens of other secondary quests that dot it. The first is a crafty Khajiit enchantress who cannot resist the temptation to empty a few pockets, while the second is a local Breton noble who has embraced the knighthood to fight all kinds of noble causes. The new companions undoubtedly represent one of the most interesting novelties of the expansion, not only because they have characters at the antipodes, but also for the evident care that the team has placed in their realization, to the point that the dubbing of Isobel is entrusted to Laura Bailey who at the Game Awards a few years ago won an award for the unforgettable interpretation of Abby in The Last of Us Part 2.

As for the endgame, the new activity making its debut with High Isle is Dreadsail Rift, a classic 12-player trial that will be able to reward the most skilled adventurers of The Elder Scrolls Online with 4 new sets of unique equipment. Focused on the theme of piracy, the trial features three main bosses and 2 mini bosses, all with very complex mechanics and which will require a good dose of cooperation between all participants. Some bosses are separated by areas full of environmental hazards, so if completing Dreadsail Rift on a normal level may not be that complicated, prepare a team of professionals if you have the ambition to complete its bosses on a difficult level.

A card game to save the world

Among the many contents of The Elder Scrolls Online: High Isle, the new one takes the lead role in our opinion card game that the developers introduced with this expansion, known as Tales of Tribute. It is natural that for a part of the community the introduction of a novelty of the genre should be accessory to the arrival of great innovations on the gameplay front, but after a few hours spent at the gaming tables against human and AI opponents we fell madly in love with this card game, to the point that we can define ourselves as the first supporters of its possible landing in stand-alone mode.

If you’ve never heard of Tales of Tribute, you’ll be pleased to know that just like Gwent was in The Witcher saga, The Elder Scrolls now has its own card game too. This content is accessed by visiting the game room of Gonfalon, and from there we learn the rudiments of a different card game in which the most monstrous creatures are not fought to death, but rather real stories are told through the cards of a deck that, at least initially, you don’t even own it. In fact, it starts with some basic card that can give money, useful for buying during your turn one of the five cards always present in the center of the table, offered by an imaginary tavernkeeper to both players.

The accumulated and unspent money is lost at the end of the turn, but all the cards obtained go to your hand and return to the deck after being used. These provide the other two Tales of Tribute currencies, Prestige and Power. The first is the score of the match, you win when you reach 40 Prestige, while the second allows you to dismiss the opponent’s cards in play and turns into Power at the end of the turn. The fact of being able to build a deck in constant rotation during the game, while competing with the opponent for the best cards in the center of the table, makes Tales of Tribute a card game able to offer players always different situations, and in ours case it was really difficult to break away from the table to go and revive the fortunes of High Isle.

The Elder Scrolls Online: High Isle continues on the same line traced by previous expansions, fielding content designed to attract that more casual range of users who certainly appreciate a substantial main quest line seasoned with many side missions. The veterans of Bethesda’s MMO, on the other hand, could suffer from the absence of great news on the gameplay front, even if the new trial seemed interesting and well structured. Tales of Tribute, on the other hand, has been able to conquer us all along the line and will certainly be able to represent a fresh pastime between one adventure and another. Try it, you won’t regret it.