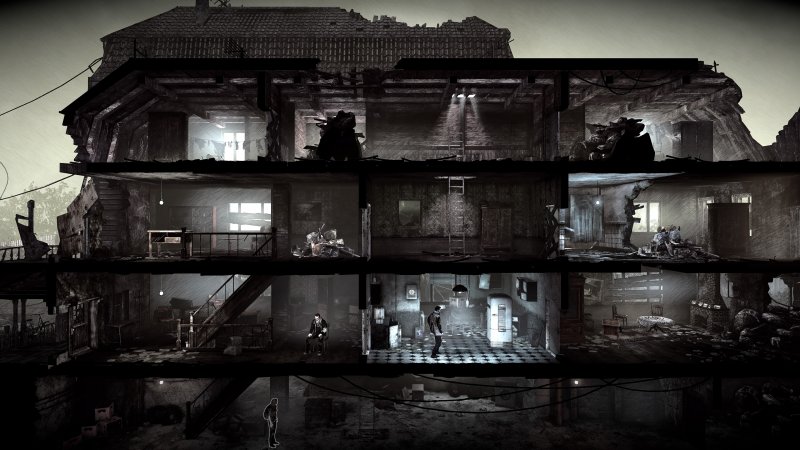 Almost 8 years after its debut, the 11 bit studios survival arrives on PS5 and Xbox Series X | S with a definitive edition: the review of This War of Mine: Final Cut.

If there’s one thing This War of Mine can do really well, dramatically well, it’s telling the horrors of war in a ruthless and realistic way. A topic that has never been so topical, given the situation in Ukraine, and it is unfortunately very likely that the inhabitants of the bombed and invaded cities have lived long days similar to those of the protagonists of the game.

Hidden inside dilapidated buildings, the survival characters developed by 11 bit studios they must try to hold out for a varying number of weeks, battling hunger, cold and fatigue in the hope that one day their city will be liberated. A formula that, almost eight years after its debut, is revived for one last time in definitive form on new generation consoles.

How did our new journey through the horrors of war go? We tell you about it in the This War of Mine: Final Cut review for PS5 and Xbox Series X | S.

Let’s start with the contents, because This War of Mine: Final Cut presents itself first and foremost as a ‘complete and definitive edition of the title that made the Polish studio famous: the end of a journey that began as mentioned in 2014 on PC and landed along the way also on consoles and mobile, albeit with some inevitable compromises on the front of the interface and controls.

From the starting screen of the game it is possible to opt for the Final Cut of the This War of Mine campaign or on the Storiesthree narrative DLCs (“A Father’s Promise”, “The Last Transmission” and “Dying Embers”) that apply the same formula to a structure that includes some variations on the theme, any malus with respect to survival mechanics and a greater focus on the characterization of the characters and their stories.

The need was to tell stories, in fact, more structured than the random elements of the basic campaign, focusing more on the representation of the feelings and legitimate doubts of those seeking to survive under a military siege but it also has to deal with many unforeseen events and specific events. An objective that the developers have undoubtedly achieved and that gives us three short but poignant mini-campaigns.

Returning instead to the original mode, it is possible to start a new session with a whole series of random elements, from the survivors that we will have to manage on their conditions, from the time of year to the duration of the siege, or create your own story by going to manually adjust all these aspects and thereby also determine the difficulty of experience.

Whatever our preferences, the gameplay of This War of Mine involves alternating in command of a variable number of characters, usually three, who have all taken refuge inside a battered building. The first thing to do is to explore this place in search of useful resources, then understand if the materials at our disposal are sufficient to build a shovel, a file or perhaps a bed or a stove to cook food.

The hours of the day should be dedicated to crafting and to the care of survivors, who may be tired, sad, sick, injured and / or hungry, with a different and progressive level of intensity which in the most extreme cases can lead to dramatic consequences. The hours of the night will instead see us choose an element of the group to go around in search of food, medicine and objects, fill the backpack and try to return safe and sound.

The possible destinations of our expeditions increase as the days pass, adding places that are not recommended due to the presence of other survivors, who will obviously try to defend their assets in a more or less aggressive way, or soldiers and snipers who could shoot at view. Initially we will not have a way to defend ourselves, but at some point in the crafting menu they will also begin to appear weapons by cutting and by fire.

However, This War of Mine is in no way an action game, so an approach devoted to violence very often turns out to be counterproductive and ends up determining the death premature (and definitive!) of one of our characters, which will affect the chances of survival of his friends as well.

It is therefore necessary to choose with caution the path to follow, and it is stealth more careful and silent it often arises as the best solution. However, the unexpected is around the corner and even once back at the shelter there could be situations in which helping someone humanly (a neighbor who needs to bar the doors because she is terrified of the fact that the soldiers can swoop into her house) can turn out to be a mistake.

Unfortunately on PlayStation 5 the woodiness and intricacy of a is confirmed control system born with the mouse in mind and therefore poorly suited to controllerswhich makes the execution of the operations an often slow and problematic practice since you cannot assign an action to a character and pass immediately to another, but you have to wait from time to time.

This War of Mine features a graphics with a peculiar style, almost monochromatic and “dotted” as if it were a moving drawing: the effect is fascinating even more with a resolution of 4K and 60 fps, values ​​that guarantee unprecedented sharpness and fluidity, enhancing the quality of the scenarios and some animations.

As for the soundthe effects are extremely essential but the music they are truly inspired and fascinating, capable of perfectly capturing the sad and dramatic atmosphere of the days spent cultivating hopes or feeding fears of what will happen. Just like in reality.


This War of Mine: Final Cut closes an important path for 11 bit studios and does so at the most appropriate time, a time when it is really important to raise awareness of what war really is for ordinary people. From this point of view, the game still does its job very well and the three extra stories add further narrative depth to the package, which however remains designed for use with the mouse and therefore turns out to be rather woody when playing with the controller.

This War of Mine: Final Cut, the review for PS5 and Xbox Series X | S of the survival of 11 bit studios