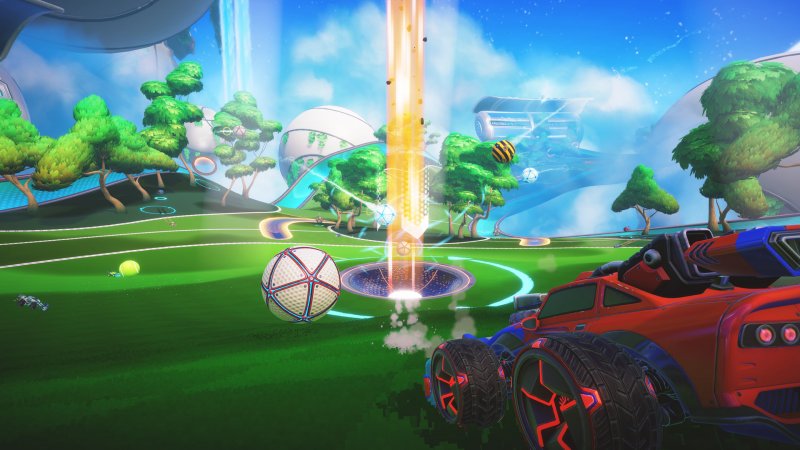 Here is our tried and tested Turbo Golf Racing, a fun arcade racing game that brings the thrilling Rocket League gameplay to the golf course.

In the vocabulary of players, at least of those who tend to browse the web pages of specialized sites, a brand new adjective has recently popped up, used to describe the propensity of a particular experience to draw a good number of its playful components as a defect. productions already present on the market. When we talk about a “derivative” video game, it is usually done to emphasize how it fails to bring anything original to the evolution of its genre of reference, summarily reiterating things already seen and reviewed. But being derivative … is it really that terrible?

Take for example the case of Turbo Golf Racing, an arcade racing game developed by Hugecalf Studios that borrows the physiognomy of the much better known Rocket League to decline it to golf courses. We are certainly not talking about a sample of originality, but are we really sure that the trend of toy cars hitting balls to hit a target has been adequately explored by Psyonix alone? What if there was room for more games of this type, away from the four corners of a soccer field?

In our tried by Turbo Golf Racing we will try to answer this question, trying to find out if this sportsman has the character and fabric necessary to distinguish himself from his illustrious older brother.

We had the opportunity to talk to you about Turbo Golf Racing already in May, but close to the release of the game on Steam in Early Access and on systems of the Xbox family through Game Preview and Game Pass, it can be precious to review quality and defects of the build that starting tomorrow will be present in the digital stores of both platforms. At least formally, the title published by Secret Mode is nothing more than a racing game, in which the goal is to arrive before the opponents at a goal which here is represented by the hole in the center of the green at the end of the course. A bit like in golf, the winner is the player who first puts their ball in the hole, proving to be the most skilled at dodging obstacles and taking advantage of speed increases, shortcuts and turbo platforms along the way.

The game experience is immediate and fun, even if at first it is hard to understand properly how it works balloon physicswith the result that the first games saw us arrive in last position with the ball stranded in some sandbar.

In fact, it is never easy to determine precisely where the ball will go once it is hit, even if a very thin line that appears when you approach it suggests its trajectory. After a few resounding defeats, however, we glimpsed in Turbo Golf Racing those subtle nuances that made Rocket League gameplay exquisitely technical, although at first glance it might seem chaotic and confusing.

Round after round we finally figured out how to give the ball a precise direction and, at that point, taking advantage of all the bonuses scattered along the course was a piece of cake. For example, being able to hit one of the hanging rings above the map can be crucial to victory, as when one hits one the ball is thrown a great distance. In the end, only the one who manages to send the ball into the rings more often wins, but also the one who manages to find hidden shortcuts while collecting a copious reserve of extra speed thanks to the illuminated paths that recharge the turbo. All much easier said than done.

To be sure, Turbo Golf Racing also takes inspiration from other popular arcade racing games, such as those from the Mario Kart series, whose characters often sabotaged each other with a series of offensive items collected during the race. Something like this is also present in the title of Hugecalf Studios, but it must be said that at the moment the system does not enjoy particular depth. It is not clear whether the amount of items that can be collected will increase during the Early Access phase, but already starting with this version there is a small set of upgrades which includes, in addition to the turbo tanks, a rocket with which to make the other pilots lose precious seconds and a shield to protect themselves from incoming missiles.

Finally, it is worth mentioning the presence of two unique skills that each driver can bring with him on the golf course, and which can be used after a short cooldown to decisively exploit the effects in the most excited moments of the race. We are talking about the “Empowering Nuclei“, active and passive skills with which you can catch the ball, or hit it with an extra bounce, or even reduce or increase its size and effect in the air.

At the moment the Nuclei are just a dozen, but they still allow you to adequately customize your style of play, offering drivers an extra weapon to get to the finish line first.

As if it weren’t already complicated enough to beat the opponents, it must be considered that there are 8 players who compete for the highest step of the podium in each game, through a series of races that represent the main mode of Turbo Golf Racing. A match is indeed a stand-alone mini-league made up of several races, which assigns points from time to time based on the order of arrival of the drivers. A stroke of luck will not lead you to triumph, instead you will be forced to compete with the utmost consistency to collect the final victory, which also translates into the greatest number of experience points and in-game currency at the end of the match. The former serve to climb the ranks of the most classic of gods Battle Pass, which includes 40 free levels filled with cosmetic rewards for the car. The seconds are finally spent in the Turbo Golf Racing shop, which also offers here some aesthetic variants for the car and for the player profile, some obtainable only with the premium currency.

Next to this mode, which embodies the true soul of Turbo Golf Racing, we also find a single player fund well developed that knows how to keep drivers busy with the beauty of 30 time trials, one for each track included in the game. Each challenge rewards the player with a maximum of three stars based on the time of arrival, and taking them all can prove to be a real nightmare for even the most crafty pilots. After all, they unlock some of the Power Cores we referred to earlier, so you will have a very good reason to try your hand at these time trials and complete them all.

We conclude the analysis by talking to you about golf courses, which represent the real highlight of the work done by Hugecalf Studios. Each course is significantly different from the others, and although they all end up alternating between greens and sandbanks, or fairways and roughs, each of them offers one-of-a-kind driving experiences, such as those that involve flying between sections. and the other on large air flows. There are many variations, and you never get tired of discovering what surprises a track hides the first time you travel it. The developers promise to add more with totally free updates, and aim to make Turbo Golf Racing a constantly expanding title thanks to the recurring arrival of new Cores and customizations. If they can keep their word, the game will have some real chance to soar in the crowded indie market despite its similarities to Rocket League.

Turbo Golf Racing is a derivative experience, of course, but it also has a well-defined character and after a few games it is evident that it was born from a precise vision of the development team, rather than from its desire to clone the success of Rocket League to exploit it. the scope. After all, we are talking about an arcade racing game perhaps a little anonymous, but fun and damn technical, as well as unusually refined to be an indie in Early Access. If you like Psyonix football, recruit a caddy and give this golfing variation a chance, without fear of any kind. For everyone else, there is always the Game Pass.

Turbo Golf Racing, we have tried the golfing variation of Rocket League