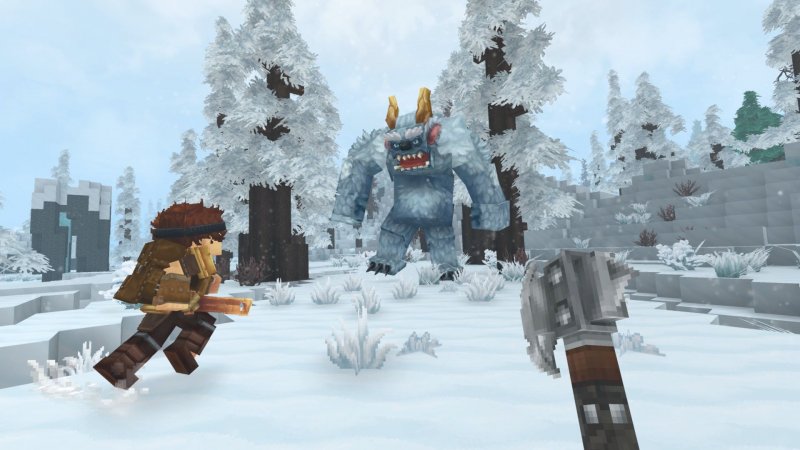 With a boundless editor, Hytale is preparing to follow in the footsteps of Minecraft in terms of stratospheric numbers and a loyal community. Will he succeed?

The paradise of creativity. A game that is preparing to break down all the limits of customization as we know them so far and that aims to replicate, if not even exceed, the dazzling success of Minecraft.

This is Hytale, the ambitious work of Hypixel Studios which has all the credentials to blow up the gaming market. You say we shot it big? Maybe not.

Follow us as we explain what is Hytale and why you would do well to keep an eye on it.

The production phase in fact began in the now distant 2015, but it is only three years later that something really concrete has begun to be seen. The trailer official announcement arrived at the end of 2018 and revealed the true ambitions of the project: to emulate the style of Minecraft and try to replicate its rise to Olympus of the best-selling and played games of all time.

Hypixel Studios, the software house responsible for development, was acquired in 2020 by Riot Games and this is where things start to get damn serious. The new resources arrived from the creators of League of Legends represented a further injection of additional possibilities, which prompted the studio to revise the size of the project upwards.

Via then the old engine and release date postponed for a few years: according to the statements of the developers, the 2023 it could be the good one.

The total redesign of the game engine in C ++ will provide significant performance benefits and simplify maintenance and future game updates; however, the main advantage will be another. With this change, it will be easier for the team to publish Hytale on multiple platforms, in order to offer users a shared and global experience.

This is a public request that the authors seem to have taken very seriously: their intention is to prevent the community is fragmented, but to do so they do not want to undermine the quality of the product.

The most awaited component of the offer put on the plate by Hytale is that relating toeditor and its boundless possibilities.

There will be nothing in the game beyond our reach fantasy: do we intend to create a weapon capable of distinguishing itself from all the others? It can be done. Do we want to give life to a monster with unique characteristics? No problem. And what would you say about an entire world designed for an adventure tailored for us? No sooner said than done.

Every single aspect of the game will be editablefor an experience that is about to mark a real turning point in the history of video games.

The sector too multiplayer it will not be outdone, at least judging by the promises of the team: the members of Hypixel are developing a structure capable of allowing users to meet, compete and share.

Players will be able to gather in a special hub to show their achievements and battle with many minigameswhich will represent only some of the activities that should fill this common space.

The multiplayer will be the heart collective experience, an immense meeting place where the community will find bread for their hungry teeth for interaction.

The adventure that Hytale will offer us on Orbis – the game world – however, promises to satisfy even the most classic palates, or those of those who tend to leave modding in a corner and are interested in a more traditional approach.

The narrative component promises to be cured and robust, enriched by generated situations procedurally capable of giving a varied and always different experience.

All this, also thanks toartificial intelligence that the authors have declared to be very refined, with non-player characters able to adapt to real users and to make decisions in an immediate way.

In these months of hard work, the guys at Hypixel have also taken care of the combat systemwhich promises to be profound and full of possibilities.

The weapons available range from the usual heavy tools, such as clubs and swords, to faster and more manageable ones, such as daggers. Each weapon will affect the way our Avatar will fight, opening up to an endless amount of different approaches.

This element will provide a great deal fuel to PvP, capable as it is of generating ever new situations and clashes, including deadly combos, unexpected reversals and the need to unleash feline reflexes.

Hytale therefore seems to have all the credentials not only to make people talk about itself, but also to make a big voice in today’s vast videogame panorama. In this sense, the Minecraft example is one North Star that the awaited creature of Hypixel Studios proves that it wants to follow faithfully, and who knows who can not emulate its splendor.

What do you think about it? Can Hytale aspire to the sandbox throne? Tell us yours in the comments.

What is Hytale and why it will be the new Minecraft