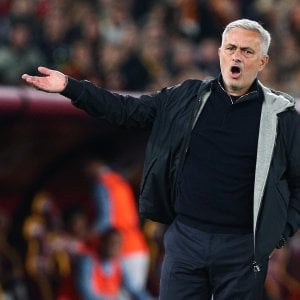 The controversy over the goal after the expiry of Francesco Acerbiwhich on Saturday allowed the Lazio to win in comeback 4-3 on the pitch of Spezia. A goal validated in full recovery even if, reviewing the images, it appears spoiled by an offside position. The referee pays the price Luca Pairetto and the Var clerk Luigi Nasca, which will be suspended until the end of the season. So let’s try to reconstruct what happened Saturday night at the ‘Peak’. In the final forcing of Sarri’s team Luis Alberto kicks after a series of rebounds, a dirty conclusion that becomes an assist for Acerbi who with a half lob overtakes Provedel, at that moment out of the posts, almost on the edge of the small area, in the midst of the defenders of his team and the two most advanced forwards of Lazio.

Rome, Mourinho attacks Bologna and the referee. Frecciata to Lazio: “he won with offside goals”

What the regulation says

The still image shows how one player (Reca) certainly keeps Acerbi in the game, but the second (Nikolaou), who in this case is the penultimate defender, is not in line or further behind the Biancoceleste defender. It is very likely that a topical issue was also committed at the Var headquarters, drawing the line on Reca and not on the Greek. An error based on what the rules say (rule number 11 of the game of football): a player is in an offside position if: any part of the head, body or feet is in the opposing half of the pitch ( excluding the midline) and any part of the head, body or feet is closer to the opponent’s goal line than either the ball or the penultimate opponent. The hands and arms of all players, including goalkeepers, are not to be considered. In order to determine an offside position, the upper limit of the arm coincides with the lower part of the armpit. A player is not in an offside position if he is in line with: the penultimate opponent or the last two opponents.

Spezia-Lazio 3-4, Acerbi’s redemption: he scores in the 90th minute and drives out a week of controversy

Mourinho: “A team won with an offside goal”

A sensational oversight, which could be decisive for the final classification of the championship and in particular for the qualification in Europa League. Not surprisingly, a dig at this episode came from Sunday night José Mourinho, at the end of the Rome-Bologna match. “The story is always the same: I have been training for 22 years and I have not changed and the other thing that has not changed is that 22 years ago you could win with an offside goal, after 22 years you can still win with an offside goal because yesterday this happened. And this means something “, the words of the Special One in the press conference in reference to the winning goal of Unripe.

Acerbi, the goal against La Spezia and Mourinho’s arrows: what the regulation says