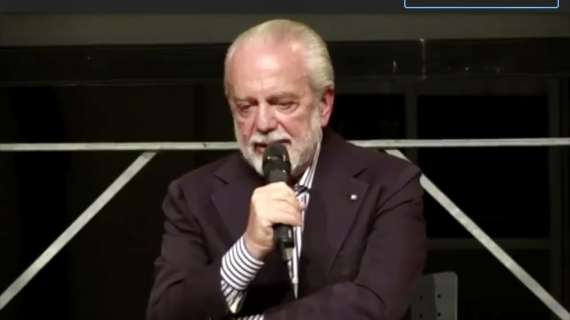 Aurelio De Laurentiis gave an interview to the microphones of ‘DAZN’ and talked about his relationship with Luciano Spalletticoach chosen for Napoli already in January 2021: “I chose it, but in January 2021. I went to Milan secretly to his house and made him sign the biennial plus an option for the third year in my favor, which he didn’t want to sign. Then I convinced him, let’s do a century and a half in two. Then when and if he wants to leave we will shake hands and nothing will happen “.

De Laurentiis and the mental issue that would have blocked Napoli: “It’s all bullshit! Of course the psychological factor is important, but I can’t think that there could be a tsetse fly that suddenly creates a problem for 25-30 players of the highest level, it seems absurd to me ”.

De Laurentiis then spoke of Carlo Ancelotti: “He is a champion who only had the misfortune of not being liked by the Neapolitan fans. He did not have the cunning to make himself such and was not seen as” one of our “from the curves” commented the president of Napoli “.

Then a background on the non-arrival of Zlatan Ibrahimovic: “We had already signed everything with Zlatan, the agreement was there – he confirmed -. Then Ancelotti was exonerated and Gattuso arrived in his place. He called me and said:” Trust me, we don’t need Ibrahimovic because .. . “. And I trusted”.

On the Scudetto: “They always accuse me of not wanting to win the Scudetto, instead I want to win it but my white hair tells me that in the lottery where many people participate it is difficult to win. This year we could have won it, but when I started the season I said that the top priority was the championship to finish in the top four, because I have to return to the Champions League “.

Forced to give someone up? “Let’s see for a moment, because to speak I know all good then to quote the ‘Viperetta’ and Lotito: ‘Put money to see camel’. Napoli are on other levels, they spent twice as much as Atalanta already six years ago. Milan could be the right reference, which is not the amount of salaries but the quality of the players in relation to their age. I have often heard myself say: ‘What do you think of someone who comes from this team?’ But why? I am evaluating the human, moral, cultural and technical qualities of a person who does this job “.

Can Bari become a new Naples? “Bari has an interesting people and my son Luigi is interested in them, who did a great job. There is a regulation that the FIGC has made on which I absolutely disagree, UEFA allows a father and a son of having two clubs participating in the European cups. If this authoritative decision by Gravina continues to exist, because he made it his own way, and we do not have to win the various appeals that are in progress, we will make a reason and the Bari will be sold. We will put all our ability to bring him to A, where he deserves to be because he has 1 million and two hundred thousand fans. There are many other clubs operating in Serie A that do not have this number of fans, seeing the fee of attendance at the royal stadium Bari is the eighth Italian team “.

ADL: “Spalletti had already signed in January 2021! I had taken Ibra, but Gattuso told me we didn’t need it. On Ancelotti …”