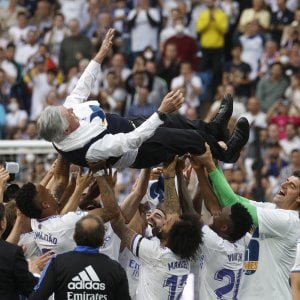 The closing of the circle. Yet something is still missing. Carlo Ancelotti was the most celebrated coach of the week after becoming the first coach ever to win the championship in the five major European leagues: Serie A with Milan, Premier with Chelsea, Ligue 1 with Psg, Bundesliga with Bayern and now the Liga with Real Madrid, with whom he will play a fascinating second leg semi-final against Manchester City tomorrow. He says enough with the clubs, the manager of Reggiolo. He does it in an interview with Prime Video: “After Real I will probably stop. But if Real Madrid keep me here for ten years, I will train for ten years. After I would like to be with my grandchildren, go on vacation with my wife, there are so many things to do that I have left out and that I would like to do. Going to many places I’ve never been. I’ve never been to Australia. I have never been to Rio de Janeiro. Visit my sister more often. Unfortunately, it’s not like you can do everything, and so the day I quit I’ll have all these things to do. “

But there is still something missing at the close of the circle. A national team and a world championship, that of 2026. “But now it is premature, certainly not for this World Cup. That of 2026, why not? It could be. I would like Canada, of course. Canada did very well”, explains Ancelotti, married with the Canadian Mariann.

Real Madrid, Florentino Perez’s obsession and the hunt for the Bernabeu legend

“Benzema will win the Ballon d’Or, no ifs and buts”

For now, however, only Real exists, where Karim Benzema is playing perhaps his best season ever. “One of the characteristics of Benzema and his career has been continuity. He has always progressed, he has not had a career of ups and downs, a career that is consistently at high levels. Perhaps now he is at the highest level of his career. Karim does not go. trained, but not managed. Karim must be used. Managed he manages himself because he is a great professional, very humble, a great player. Karim is not told anything, this is the truth. He has solved many games for us, he was decisive this season – recognizes Ancelotti – At the moment he is one of the most famous players in the world and he maintains a great humility, and I believe that this is his strength. But you don’t win only for Benzema, behind there is the strong structure of a strong club, and the quality of a high-level squad. Ballon d’Or? There is no ifs and buts. I think he will win it. ” And if Mbappè also arrives, no problem: “In general, good players play …”.

Rombo di tuono is our football newsletter: insights, interviews and comments from the signatures of Repubblica. All the best on Serie A, Champions, National team, characters and stories from Italy and abroad. Click here to receive it every Friday in your mail

Ancelotti says enough: “Real Madrid will be my last club. But in 2026 I would like to coach Canada at the World Cup”