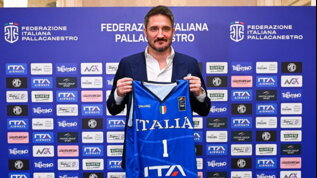 In Trieste he ends 90-71 in favor of the national team of the phenomenal Luka Doncic, author of 12 points

The friendly match that inaugurates the Azzurri summer and sees the debut Gianmarco Pozzecco on the bench of the national basketball team he says that Italy is defeated in the match against Slovenia. In fact, at the Allianz Dome in Trieste, the Azzurri are bent 90-71 by the reigning European champions, dragged by an absolute champion of the NBA as Luka Doncic. The Dallas Mavericks playmaker signs 12 points, for a really too strong formation.


basketball
Basketball, Pozzecco in tears at the presentation: “I suffered a lot for this shirt”

There was a lot of anticipation for Gianmarco Pozzecco’s debut at the helm of the Italian national team. Certainly for the former playmaker of Varese and Fortitudo Bologna, as well as assistant coach of Ettore Messina in the last triumphal season for Olimpia Milano, champion of Italy, the challenge that inaugurated his experience on the bench inherited a few weeks ago from Meo Sacchetti it was not exactly the simplest: in fact there was Slovenia, in a friendly match, at the Allianz Dome in Trieste and the current European National Champion, as well as fourth at the Tokyo Olympics last summer, won 90-71. Now it will be necessary to oil the mechanisms in the coming days, in view of the July 4th match against the Netherlands in Almere for the 2023 World Cup qualifiers. The guests (although, to tell the truth, Trieste is located just 150 km from Slovenia) basically led from the beginning: after the 7-5 signed by Spissu, in fact, the Slovenians never look back.

Luka Doncic, together with Goran Dragic, allow the Balkans to start grinding play and points and to take off, also touching +16 as the maximum advantage of the first half (37-53). In fact, the Italbasket resist only a quarter in the face of the overwhelming power of the opponents, who in the second period considerably increase their gap and in the third even break through the double-digit advantage. For the ‘Poz’, definitely positive notes from Achille Polonara (12 points and 10 rebounds) e Marco Spissu, as well as for rookies Leonardo Okeke and Tomas Woldentensae (13 points and 6 rebounds). Doncic finished with 12 points, 7 rebounds and 5 assists in less than 24 minutes, and was rested for most of the second half. Dragic adds 11 with 4 assists. All players from Slovenia go to the scoresheet.

POZZECCO: “BELINELLI AND HACKET WILL NOT BE EUROPEANS”
The coach Pozzecco has announced two heavy absences for Italy in view of the European Championships. “I talked to Marco Belinelli and Daniel Hackett, we have decided by mutual agreement that the Europeans will not be there. A choice that saddens me, but today, inevitably, a basketball player has to make choices. I thank Marco and Daniel for talking to me as a friend, we all shared a choice of this type here, the president, the federation. As our president Petrucci always says, full speed ahead “, said the Italian coach. And again:” It was a special day for me, I lived an extremely long and tiring week, an earthquake of emotions brought me to the top tonight : when I entered the field I was visibly excited. The reception of the public in Trieste, Italian and I think I can also say Slovenian, was something unforgettable: I don’t think I deserve it, but it happens to me, and when I do I am happy and I thank you. I thank everyone for this wonderful welcome. It’s been a week, and my staff can confirm it, in which people have been extremely loving, I hope to always see this bond. “

There was also a special spectator: “Ettore Messina was here, it was one of the most beautiful things that happened to me: you know that the thing I care about most are human relationships, seeing Ettore arrive at the hotel to be close to me was exciting “. On the match: “It was a complicated match for us, I congratulate Slovenia, the coach Sekulic and all his staff. Doncic was a spectacle: he made a step-back, I thought he was shooting short by two meters – he was behind our bench – and he scored. Seeing him live was exciting, because we are the first to enjoy the talent. He, Dragic: Slovenia is European champion, is one of the strongest teams in the world “. “We have set up a team that did not allow us to bring those who played the championship final, but I am proud of my boys. “It is also to consider the attitude to play together. The boys lived a little too much tension of the match, it was normal, but they were good at never giving up and making sure that the match was pleasant to watch for all the players. fans, “he concluded.