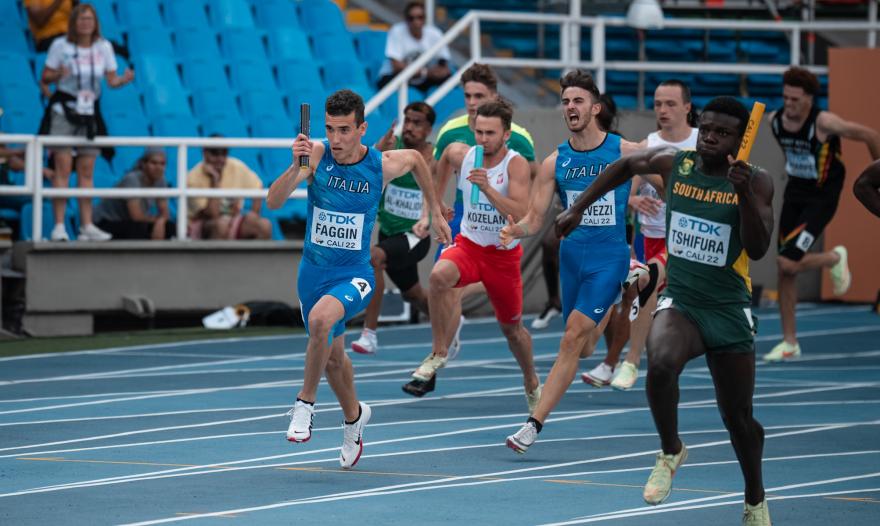 In the afternoon of the fourth day ai Under 20 World Cup from Caliin Colombia, the best placing in an Italian key is that of Ludovica Cable on the 400 obstacles. The 18-year-old Piedmontese is seventh in a time of 58.72 while Alessia in the same final Seramondi closes eighth (1: 01.78), with the blue less brilliant than in previous rounds and engaged in the inside lanes. On the platform of the ninth hammer Davide Vattolo with 72.54 at about half a meter from the staff and also from eighth place that would have allowed him to continue in the other three final throws. Thirteenth Agnes in the 3000 hedges Carcano in 10: 39.25. The 4×100 meters relays that conquer the finals tomorrow night are ahead: the female Gaya BertelloLudovica GaluppiAgnes Music and Ilenia Angelini in 44.69, less than three tenths from the Italian category record with the second partial place and the sixth overall time. The male quartet, formed by Eduardo, also qualifies LombardsLoris TonellaAlexander Malvezzi and Alessio Fagginin turn seconds in their battery in 39.63 (fifth time of the shift).

400 OBSTACLES – After reaching the final with the recovery times, the blue touch the two inside lanes. First the Alexandrian Ludovica Cablewhich still stands out for its balanced distribution, and secondly Alessia Seramondi, with a rather aggressive start, but the Brescia loses the pace on the sixth barrier and in fact her race is compromised. The challenge for the medals is further ahead: the winning return of the American Akala Garrett to prevail in 56.16 on the Swedish Hanna Karlsson, growing again, who takes the lead on the straight and takes silver with 56.71. Bronze went to the other American Michaela Rose (56.86), held back by an error on the penultimate obstacle. The double Italian presence in the final therefore ends with the seventh place in 58.72 of the Piedmontese Cavo, after the excellent results of the previous rounds (twice under fifty-eight), and the eighth in 1: 01.78 of the Lombard Seramondi.

HAMMER AND HEDGES – An initial launch half a meter from the personal best and two more just below, for a demonstration of solidity on the most important occasion, but not enough to continue the world championship adventure with the three final rounds. The blue Davide Vattolo he is ninth in the hammer: his opening 72.54 (in the continued series with 71.79 and 72.08) is worth his second career performance, as he did better only when he reached 73.01 this year. On the third attempt the Udinese is overtaken by the 73.05 of the American Tarik O’Hagan, weight champion, eighth here. Throbbing final: only an inch divides the Finnish Max Lampinen, gold with 76.33 at the fifth entry on the platform, and the Cypriot Iosif Kesidis, 76.32 at the last test. In the 3000 steeplechase the three athletes who divide the medals compete against each other: show by Kenyan Faith Cherotich, bronze in the last edition, to give an unsustainable pace for the opponents by triumphing in 9: 16.14. The last to surrender is the Ethiopian Sembo Almayew just before passing the second kilometer, silver in 9: 30.41, with compatriot Meseret Yeshaneh third (9: 42.02). For the blue Agnese Carcanothirteenth place with a time of 10: 39.25 and so the Veronese is the fourth of the Europeans at the finish.

RELAY: BLUE OK – With a good choral performance, the 4×100 of Italy fully captures the objective of the women’s final. And she succeeds by stamping a time trial of value: at the finish line in 44.69 the quartet with the Piedmontese Gaya Bertellotwo students like Ludovica from Varese Galuppi and the other Agnese from Turin Musicthen the ascolana Ilenia Angelini.

For the blue sprinters, what did not arrive in the individual race (out in the heats of the 100 meters Galuppi and Musica, Angelini eliminated this morning in the first round of the 200) they take it with the interests in the relay thanks to a series of substantially good changes , which make the baton run fast to the point of closing not too far from the national category record (44.40 dated 2018). Jamaica is impregnable on 43.28, which among others, after the gold encore in the 100, ranks Tina Clayton in the second half. But the second place, and the direct pass for the final, goes to the Italian team with the sixth time of the heats.

4×100 IN THE FINAL FOR THE MEN – Different formula to move forward in the men’s 4x100m, but the outcome is the same: Azzurri in the final. This time four heats are scheduled and therefore the automatic qualification rewards only the winner, with four results to retrieve. Italy immediately takes to the track: the not yet 17-year-old Eduardo takes off from the blocks Lombards, Neapolitan who lives in Ostia. Then they run Loris from Treviso Tonellathe day after the staff on the 200 meters, the Brianza-based Alessandro Malvezzi and Alessio from Padua Faggin, dropped to 10.25 in the 100 of Cali. Less fluid changes compared to the women’s relay, but the blue team closes second in a comeback with 39.63 behind South Africa (39.50). In the second “semi” Great Britain is out, in the third Botswana without the Tebogo phenomenon is disqualified, in the fourth Australia stops. In the end there is the fifth overall time trial and here too the Italian under 20 record of 39.28 set last year could be even more approachable.

GANZ OUT – Riccardo tries in the semifinals of the 400 obstacles Ganz, who disengages well in the first part of the race, but then the Treviso is in decline on the last straight. The blue closes seventh in 52.58, therefore without returning to under fifty-two seconds as in the battery (51.96), in the season that saw him improve up to 51.29. However, the task of the Venetian was prohibitive, considering that on balance it was 50.62 the time required for the final.

THE OTHER TITLES – Sensational head-to-head in the 200 meters: Israeli Blessing Afrifah comeback mockery Letsile Tebogo (Botswana), master of the 100, who misses the double and is defeated at the photo finish by just six thousandths. Both personal under twenty seconds, in a formidable 19.96: for the winner it is also the new European record under 20 (beaten 20.04 by Ramil Guliyev in 2009), in the world in the category only Knighton (19.49) and Bolt ( 19.93). In the auction the French Anthony Admire yourself adds three centimeters to his record with 5.75 and becomes the fourth under 20 ever, while in the women’s race postponed due to bad weather (from yesterday evening to this morning) the American Hana Moll it is the only one at an altitude of 4.35 with a golden leap in the third test. On the lap of the track, titles of the 400 to the South African Lythe Pillay (45.28) and the British Yemi Mari John (51.50). New success in the heptathlon of the Finnish Saga Vanninen (6084 points) after last season’s gold medals at the U20 World and European Championships.