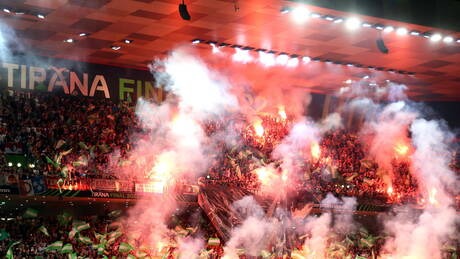 20.34 – Roma closes the season with yet another sold out, and this time in front of a big screen. In the afternoon, 50,000 tickets were sold to attend the Conference League final between the Giallorossi and Feyenoord live on TV at the Olimpico. The Duca D’Aosta bridge was closed outside the stadium, besieged by the fans who occupied it, showing off flags and smoke bombs before making their entrance into the stadium where 8 maxi screens were set up plus the two of which already arranges the plant. Regular flow to the turnstiles open from 6.30 pm.

17.02 – “It is a great joy to participate in a final. We are convinced that Roma can grow further and soon reach the highest levels.” You said it, according to what is learned from Uefa sources, the president of Rome Dan Friedkin (person unwilling to speak in public) at the Uefa Gala dinner last night in Tirana. 250 guests took part in it in a room of the Opera House. Friedkin made his statement after being invited to the stage, as did his counterpart Feyenoord president, Toon van Bodegom. At dinner, where UEFA president Aleksander Ceferin did the honors, the Albanian Premier Edi Rama (“it’s true, I’m Juventus. But also Mourinhiano”, his joke), the president of the football association Armand Duka, the mayor of the city Erion Veliaj and the ambassador were also present Italian Fabrizio Bucci, Roma fan who will be at the stadium today. The Cup was placed in the center of the room, which at the end of the final will be raised by one of the two captains, Lorenzo Pellegrini or Jens Toornstra. 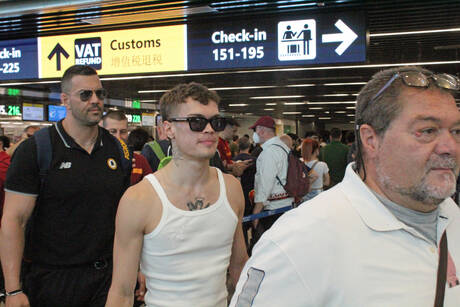 16.07 – Now it is truly a Romanist invasion of Tirana. As expected, most of the Giallorossi fans arrived with the charters that started this morning (the first at 8) and their number in the city is growing more and more. The forecasts speak of twenty thousand arrivals, and if they were confirmed, there would be the problem of many fans without a ticket to the stadium. A large number of Giallorossi supporters, in any case, also following the recommendations provided by Ambassador Fabrizio Bucci, converged in the fan zone reserved for Roma fans, in a park with an artificial lake located in an area south of the stadium, which is a quarter of an hour away on foot. All the refreshment points in the park and the clubs in the immediate vicinity were very crowded, where you can hear the fans singing the anthems of the Giallorossi team. The same, especially those of Antonello Venditti and Lando Fiorini, which are ‘fired’ by the loudspeakers of the real ‘amphitheater’ set up in the park and which has a giant screen in the center from which the fans can watch the game. After the clashes of late yesterday, the situation has so far been under control by the Albanian security apparatus: under a sweltering heat, police patrols, each made up of two agents, monitor the situation. 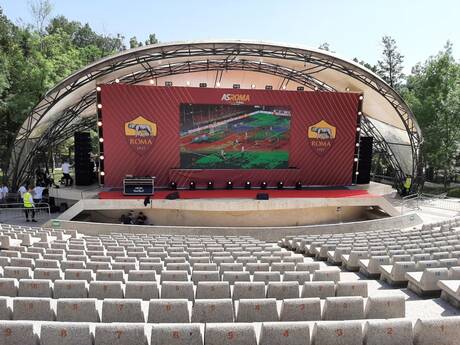 3.43 pm – Francesco Totti it is in Tirana, to the delight of the thousands of Romanists who, more and more, are filling the streets of the Albanian capital, and in particular those of the fan zone reserved for them. The former captain arrived shortly before noon, as a special guest of the Football Association of Albania, and from the airport he went directly to a lunch organized by the federation itself, which was attended by the president of the body, Armando Duka, and the Albanian Premier Edi Rama, a declared Juventus fan but for these days ‘converted’ into a Roma sympathizer (“I love Italy”), who had a long conversation with Totti. At lunch the other former Roma champions also took part Aldair, Vincent Candela and Gigi Di Biagio. After lunch Totti went to the hotel, at the Plaza, a couple of hundred meters from the fan zone of the Feyenoord supporters. Meanwhile, arrivals in Tirana are also reported Antonello Venditti, actor Edoardo Leo and former Giallorossi president Rosella Sensi.

15.40 – The safety plan prepared by the Prefecture was triggered this morning at 7: in the streets of the Capital the model successfully adopted for last year’s European Championships will be replicated in order to avoid, or limit as much as possible, any problem of public order. In total they will be about 1000 the police employed. At the Olympic Stadium everything is ready for the opening of the turnstiles to welcome the approximately 50,000 Giallorossi fans who will watch the final on two big screens. The Trevi fountain is cordoned off in view of the Conference League final. Armored city center.

14.03 – To allow the outflow of the fans who will follow the final of the Uefa Conference League between Rome and Feyenoord tonight through the big screens of the As Roma at the Olympic Stadium, at the request of Roma Capitale, the Provincial Committee of the Order and Security has ordered changes to the public transport service of the capital. This was announced in a press release. The day and night service on the entire Atac surface network will be regularly operational unless otherwise specified by the Committee. Also for the underground network, the service will be regular with last runs from the terminus at 11.30 pm. Work has been suspended on the Castro Pretorio-Laurentina section of metro B which will be active on the entire Rebibbia / Ionio-Laurentina line. Yesterday, however, the Rome Police Headquarters had ordered the stop of the Atac and Roma Tpl bus and tram network, throughout the municipal area, from 10pm to 3am.

Conference League final, a man injured in the head, also 2 agents, 8 people arrested. Accidents also with Roma fans. Megastriscione of ‘Mou’ on a Vespa on the facade of the university near the stadium (ANSA)

13.25 – “To the Roma fans who are already or are arriving in Tirana and are without a match ticket, and I think there are many, I say to go to the ‘fan zone’ reserved for them, which is a practically ‘sealed’ park located south of the stadium “. To address this invitation is the Ambassador of Italy to Albania, Fabrizio Bucci, who confesses to be “Roman and Roman” and who will be present “with my yellow and red scarf around his neck” tonight at the Kombetare Arena to attend the final of the Rome-Feyenoord Conference League: “I hope to enjoy the game”. In the meantime, he has prepared in the embassy “a task force that has been working 24 hours a day for two days to be ready for any eventuality and provide assistance. First of all, I have to make sure that the machine works”. But Ambassador Bucci also wants to say something about those, of Romanist faith, who have been stopped by the police or even already repatriated. “They are pseudo-fans – says Bucci -. We understand that some of them were stopped because they tried to cross the security line set up by the police in the center. Others have been found with knives, jacks and clubs and then, speaking as a fan, I say that this is sport, and not a battle. Whoever goes to the game as if he were going to war is a criminal and I think there is nothing more to add. “There is also time for a recommendation:” Our strong suggestion to the authorities here not to serve alcohol in glass containers is was heard – says the Ambassador – but groups of drunken Dutch supporters have been around since yesterday and when they are in these conditions they become dangerous, as we saw last night: be careful “

11.24 – Follow each other from 7 this morning at Fiumicino airport, charter departures for Tirana with the Giallorossi fans on board who, from the stands of the National Arena (Arena Kombetare), will tonight attend the final of the Conference League that Roma will play against Feyenoord. At a rate of one take-off every 30 minutes until 14, the departure time of the last plane, there will be 12 special flights, including that of 12 by Ita Airways, which will bring about 2000 supporters to the Albanian capital. AND’ a yellow and red stain for the presence at Leonardo da Vinci of the many Roma fans wearing scarves, caps and jerseys of Roma with the names of their favorites, including Abraham, Pellegrini and Zaniolo, but there are also those who pay homage to Totti and De Rossi, the one that characterizes the check-in area of ​​Terminals 1 and 3 this morning. Under the security control of the Fiumicino Polaria and assisted by the airport staff of Aeroporti di Roma, the fans, lined up in front of the check-in desks, await their turn and, amidst laughter and jokes, they sing a few chorus from time to time to shout theirs “Go Rome”. Then there were many photos of the fans and selfies made with the VIPs we met on the way to Tirana, including Blanco, a white tank top and sunglasses with black lenses, and Antonello Venditti who, amused by the “warm embrace” received, were then escorted up to the gate.