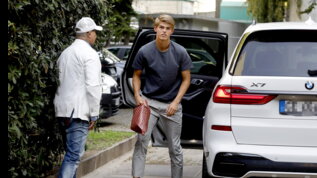 Yama Sharifi and Tom De Mul revealed the details of the negotiation that led the Belgian to the Rossoneri. After the meeting in Belgium there was a period of silence, then the decisive squeeze in Lugano

Some marriages are marked by fate. This is precisely the case with Charles De Ketelaere and Milan: “The first contacts between Milan and Charles date back to a couple of years ago,” he reveals Tom De Mul – CDK agent – in an interview for Het Laatste Nieuws. At his side his colleague Yama Sharifi, which is also essential for carrying out the operation. With the Devil, De Ketelaere signed a contract until 2027. Yet the steps that led to the white smoke between Milan and Bruges were not always so obvious.


It all started two years ago, with the interest of the Rossoneri transfer men: “They were sure he was already a good player, but at the time they needed someone ready. Maldini and Massarahowever, they asked us anything about him. ‘What person are we talking about? What kind of guy is he? ‘, Things like that “, confesses De Mul. However, other big European clubs had also fallen on the Belgian talent:”West Ham, Arsenal, Newcastle, even Barcelona. The Blaugrana followed him for a long time, but we weren’t sure if it was the right choice for him. At least in that moment “.

Triggering the final rush for the player was the competitive offer of Leeds: “Leeds were very concrete and Charles liked him a lot too. Besides, Jesse Marsch is a good coach. However, the boy wanted to compare himself and hear from other clubs as well.” From there, the intensification of contacts with Milan to the breaking point: “So we called Milan: ‘If you want it, then you have to push now.’ Maldini was still struggling with his renewal, but then he called him. Charles also spoke with Pioli, so he was completely convinced. The problem? Leeds had offered 40 million, while the Rossoneri had a sort of … stake. Bruges would never have sold it to twenty million, so it was up to me and Sharifi to raise Milan’s offer. However, after that meeting in Belgium, the two teams no longer wanted to talk to each other “, says De Mul.

Sharifi takes over to tell the turning point of the negotiation, that is the meeting in Lugano: “The Lugano meeting was crucial. It is as if two football superpowers are no longer able to communicate. It was a battle. The outside world doesn’t understand how difficult it is, so Tom and I have outlined a strategy. We had to do everything possible to complete the deal. “All this while the player was facing the summer preparations with Bruges:” I had instructed him well – continues De Mul -, after a few days I said to him, ‘do you want to go to Milan? Then expect six tough weeks. ‘ Choosing Leeds would have been the simplest choice among other things: it was more advantageous for Bruges, for Charles and also for us, but the player has always wanted Milan “.

De Ketelaere, the agents: “For two years on Milan’s radar. Then the break with Bruges …”