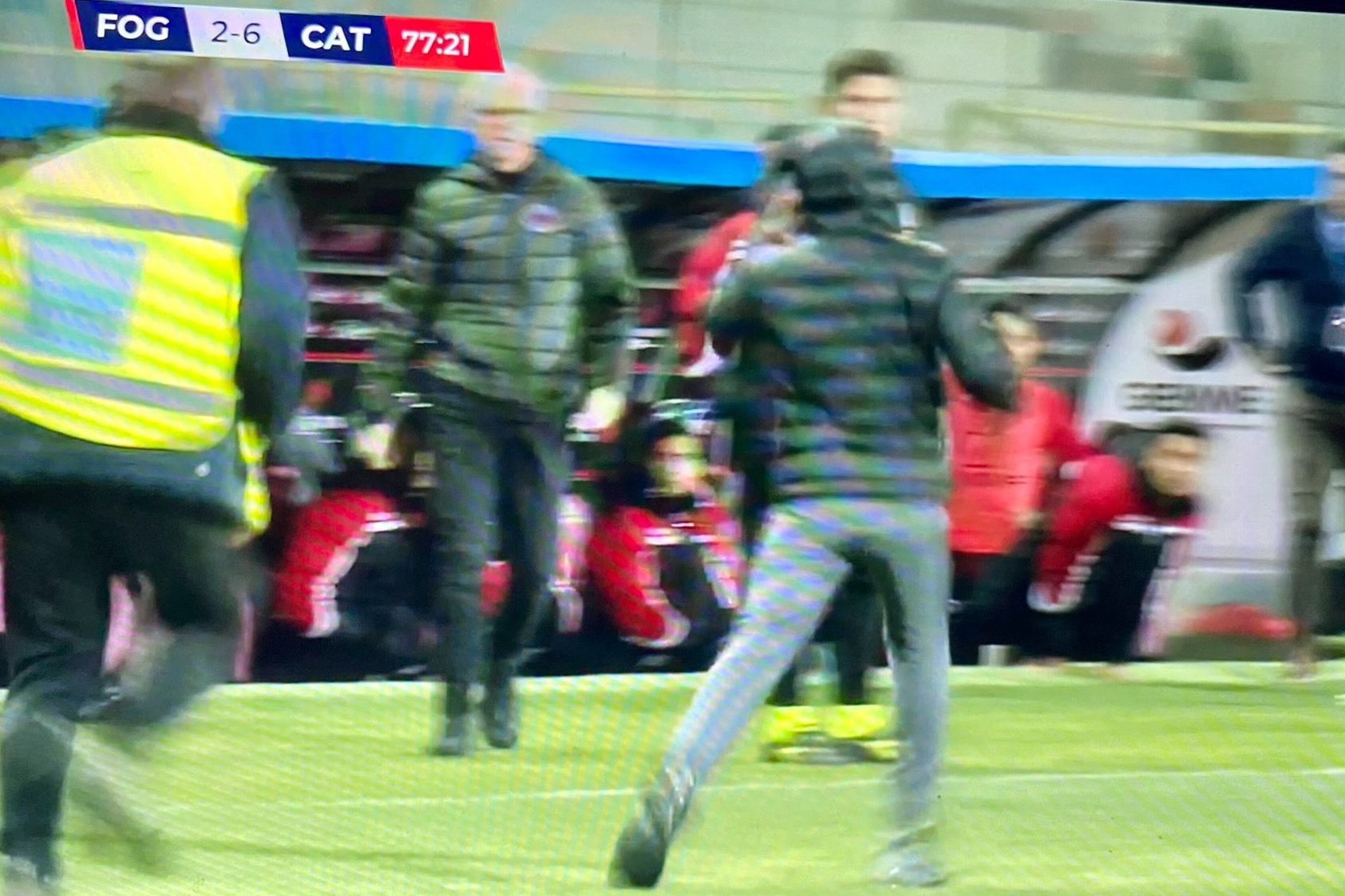 Foggia-Catanzaro interrupted several times for the folly of the fans: they make an invasion of the field and target the former on duty, Pietro Iemmello. One of them almost manages to get his hands on him and seems to mimic a terrible gesture: I’ll cut your throat.

A moment of the invasion of the field at the Zaccheria di Foggia, when the hunt for Pietro Iemmello started.

Field invasion. Manhunt. Threats and tugs. Insults and screams. Slaps and shame. Race suspended twice due to excesses and then resumed with difficulty. It all happened in the postponement of the championship of Series C between Foggia and the Catanzaro. To unleash the madness of the fans of the ‘satanelli’ Apulian was (also) the double shot by Pietro Iemmello, striker of the Calabrian and former on duty. An “affront” that – thanks to the bad performance of the meeting – some of the most agitated did not like thinking of getting justice.

The former Rossonero was targeted, hunted, forced to leave the field and be replaced and – once on the bench – he risked being attacked by some troublemakers who had launched themselves on the green rectangle of Zaccheria. They ran like mad towards the bench where he was sitting. Absolute madness.

What happened? The reconstruction of the facts leaves you speechless for the crazy sequence of actions and gestures. The deduction puts chills on him: they really wanted to beat Iemmello. The uproar broke out when a penalty kick was granted to Catanzaro who at 64th had already closed the match thanks to the advantage of 1-5 and numerical superiority (in the first half Sciacca was sent off).


He gives the Nazi salute several times during the match: a fan stopped, now he risks jail

The Foggia fan who comes into contact with Iemmello and makes a terrible gesture: it seems to threaten him to cut his throat.

As soon as the former Apulian striker took the ball and went to the spot for the serve, the tempers – already overheated – exploded. He will never be able to kick from eleven meters, he will be prevented and – despite him – he will have to leave the ground. The match is suspended for about ten minutes, the cap has now blown and it is almost impossible to contain the fury of the most violent. The only way to try to quell that uncontrolled, unmotivated, unjustifiable anger is to find an immediate solution: Iemmello gives up taking the penalty and is replaced. Sounas shows up on the spot: shot rejected by the goalkeeper, Gatti’s tap-in rounds the result on 1-6.

The referee is about to blow the whistle but has to stop. From the Curva Nord, bottles, smoke bombs and other objects rain onto the field. The attempt is clear: to disturb the execution of the penalty. But it is the least serious thing. The worst will happen a few moments later: a couple of supporters climb over the fence, throw themselves on the lawn and run towards Iemmello who in Foggia had been greeted by a traitor, booed and mocked with choirs and banners. They are blocked before being able to carry out that blitz, one of them almost manages to reach the player and from the images you can see how you try to give him a slap. But he is tackled by a steward and then surrounded by Catanzaro players before being dragged out of the green rectangle.

The Foggia fan who has made an invasion of the field is tackled a step away from Iemmello.

Foggia shortens the distance (2-6) but the match no longer has any value, it has completely gone into the background, swept away by the fury of the hooligans. We continue in the hope that the most belligerent minds have calmed down, that the anger has been subsided but not. The chronicle of those moments includes more. A few minutes later another invasion occurs, this time the ultrà breaks through from the Curva Sud sector. The script is the same, the goal also: to beat Iemmello who, when he wore the Foggia shirt, was nicknamed King by those same fans who tried to attack him. The stewards’ intervention will put him on the run. A bad evening, a hellish evening in the den of the ‘satanelli’ in support of a meeting that lasted over 100 minutes due to the interruptions.

Delirium in Foggia-Catanzaro: the fans interrupt the game, they want to beat Iemmello