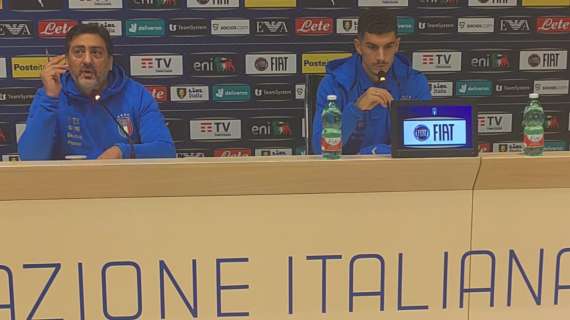 Giovanni Di Lorenzo left Naples and went to Coverciano to join the national team. And today the blue full-back spoke at the conference

Giovanni Di Lorenzo he left Naples and went to Coverciano to join the national team. And today the blue full-back spoke at the press conference, also talking a lot about the great year he is experiencing so far with the Neapolitan club: “We are bringing beautiful football to Italy and Europe, we must continue like this. For Italian football to have a club like ours, but also like the others who participate in international competitions, it is a beautiful thing. We hope it will be a good omen for the whole Italian movement “.

Have you thought that you could become the captain of the third Scudetto?
“It would be really a dream to win the Scudetto in Naples and win it as a captain like Maradona. However, as mentioned before, the season is still long. We have made an important journey, but there are still many races to play. We have an important advantage, but with so many races ahead it is still long “.

How did your appointment as captain come about? Was it a question of seniority?
“No, I wasn’t the one with the most appearances. It was Spalletti’s choice with the group, for me it’s really a pride to wear such an important captain’s armband. Every day I’m giving my all to prove myself up to this role.” .

Would you have preferred the championship not to be interrupted?
“It was certainly an intense period, with lots of matches. It can do well to take a break and then start again in January with even more desire. Clearly in this stop we all hoped to be in the World Cup, but that’s the way it went. We left with great desire first. of the European Championship and now we have to do the same thing. Reset everything, create a new group and a new environment “.

Why are we out of the World Cup in your opinion?
“They were small episodes that led to the non-qualification. If I think back to the double challenge with Switzerland, the match in Palermo with Macedonia … We all know how it went. It was a path where the details made the difference” .

Are you more worried about Napoli or the opponents in the second half?
“Sometimes I hear about the break for Napoli … but the break will be there for everyone. We will see how the championship starts again, so far we have made a very important path, but an important advantage with many races still to be played. We are all focused on the game. our path and we know we don’t have to give up an inch “.

What would you like to bring from your Napoli to this national team?
“Through work we can achieve important results. This year in Naples we have lost important pawns, but through the young we have restarted and I hope the same thing here in the national team as well. Mancini focuses a lot on young people and we must also put them in a position to express themselves. to the best”.

Why is the match against Albania important? Have you heard of Hysaj?
“I haven’t heard from him lately but I have a wonderful relationship with him, I can’t wait to face him on the pitch. They are two friendly but important for the ranking, they must be faced in the right way”.

TMW – This year Napoli is more of a group because there are no first women?
“I disagree, even last year there was a beautiful group. Nobody felt further ahead. Of course this year thanks to the results we are becoming more aware and for me to wear the captain’s armband is an honor. the best to prove that I am worth this role “:

Which rival do you most fear for the Scudetto?
“There are a lot of teams in very few points. We have to think about ourselves and carry on the path we have done so far.”

How much is Spalletti influencing in obtaining these results and how different is it compared to last season?
“It is no different than last year. Much of the credit for these results goes to the coach who makes everyone feel important and play who they deserve. This leads to raising the competition in the group and we are really making an important path, the credit is certainly also of the coach “.

Di Lorenzo: “Captain by choice of Spalletti and the group, the Scudetto with the sash is a dream! Stop? Unexpected record, but there is for everyone …”