Roma starts again in the Europa League thanks to the usual Paulo Dybala that annihilates the Finns of HJK ​​Helsinki. After an opaque first half despite the numerical advantage due to the expulsion of the captain of the guests Tenho, the Giallorossi, with Joya in the field only at the beginning of the second half, change face and spread going ahead with the former Juve and doubling with Pilgrims. The 3-0 comes with the long-awaited first goal in the Giallorossi by the former Torino player Belotti tonight on the pitch instead of Abraham in an Olympic sold out once again.

For the challenge against the HJK the Special One goes to the defense at 4, with Karsdorp and Vina on the outside. The 4-2-3-1 Giallorosso should then be completed by the trio formed by Zaniolo, Pellegrini and Spinazzola, behind the “Gallo” Belotti. Departure from the bench for Dybala this evening, the Argentine had always started in this start of the season. In the HJK stands the presence of the former Chievo Verona and Brescia, Përparim Hetemaj, who will play in support of Abubakari. Slow start by the teams at the start of the match: first jolt by Belotti that intercepts a wrong back pass from Lingman, the number 11 immediately points the door and is spread by Tenho just before entering the area. Do it last man and red (decided after the consultation of the Var) for the captain of the HJK who remains in ten.

The air of Europe does not help Fiorentina: in the match that was supposed to relaunch it after a disappointing start to the season, the purple team literally collapsed in Turkey under the blows of Basaksehir in the second day of the Conference League. (HANDLE)

In numerical advantage, Roma tries to accelerate but the most dangerous ball ends up on the feet of the Finns just before the half hour: the defense of Roma appears distracted, soft cross from the trocar on the far post, on which Spinazzola loses the marking of Hoskonen, header from inside the small area that catches the pole and ends to the side. Then Roma tries above all with Belotti to go 1-0, but despite the numerical superiority for most of the first fraction they are unable to break through the HJK defense and the first fraction ends in a draw. Double change in the second half for Mourinho who takes away the yellow card Ibañez for Smalling and inserts the quality of Dybala forward. And the results can be seen immediately: here is the advantage of Roma precisely with the Argentine, it takes a minute for Joya to be decisive, Spinazzola pits in for Pellegrini, a touch at the edge of the area for Dybala who with a diagonal low shot from the left brings forward Rome.

Another two minutes and the doubling arrives: Zaniolo goes on the wing, penetrates from the short side of the penalty area, jumps an opponent and crosses into the small area for Pellegrini who bags the belly 2-0. satisfies and continues to push thanks above all to the inspiration of the Argentine: after several wasted opportunities the 3-0 arrives with the first goal in the Giallorossi of the ‘rooster’ Belotti who has just arrived from Turin. Another assist from Zaniolo who once again crosses to the center from the right, a perfect low shot for the former grenade who easily hits the target. There is time for some other dangerous action by Mourinho’s men in particular Zaniolo and Dybala, but the result of 3-0 does not change. The Roma party for the first at home in the Europa League, in an Olympic full and overflowing for the umpteenth time, can begin, while the negative debut in Bulgaria against Ludogorets is already behind us. 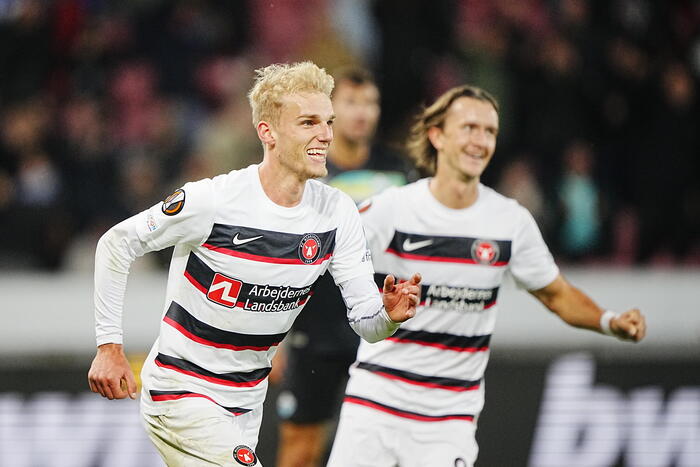 Europa League: Danes in goal with Paulinho, Kaba then Evander, Isaksen (both on penalties) and Sviatchenko. Milinkovic-Savic for Sarri’s team (ANSA)