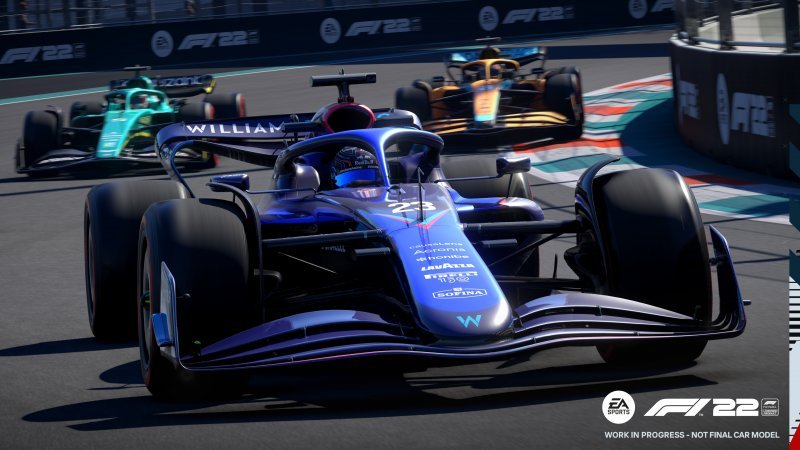 We previewed the Miami street circuit in F1 22, a track making its first debut this year in the Formula 1 world championship.

The fantastic duel on the last lap of the 2021 championship between Hamilton and Verstappen has rekindled a huge interest in Formula 1. After years of Mercedes domination, with an interminable series of victories for the English driver, a new team has managed to conquer the prestigious pilots title. As if that were not enough, in 2022 the Circus federation introduced a new regulation with the aim of increasing the show on the track. In February, the Formula 1 teams then presented their new single-seaters and a few weeks later an exciting new championship began. Ferrari fans are already rejoicing in the solid performance of the red and in general we are experiencing GPs full of adrenaline. New regulations, new top stables, new single-seaters and … new tracks. This year, in fact, the Miami circuit will be added to the calendar, specially set up around theHard Rock Stadiumwhere the stables will battle this weekend.

In recent days we have been able to get our hands on a code still in development for the new official video game F1 22. In particular, the developers gave us the opportunity to test this year’s single-seaters on the Miami track. Just over five kilometers of fast corners, high-speed sections and a particularly difficult section.

In this tried F1 22 We therefore want to share with you the first sensations of this new era of Formula 1, focusing our attention on the US track which will also debut in the official game.

Formula 1 will be able to count on a double appointment in the United States and the public’s expectation for the debut in Miami is truly sky-high. Nineteen corners, three DRS zones and two very fast sections. These are the features key to the new Florida state city route. The engineers undoubtedly took inspiration from other tracks, taking advantage of the asphalted sections already present around the Hard Rock Stadium as a basis. The end result is a well-balanced mix of elements, which should guarantee the show on the track. The first sector is characterized by high-speed corners, similar to the US circuit in Texas.

Then you move on to a long straight with the possibility of activating the DRS and then arriving at a strong detached in a sharp bend really very tight. This stretch is very reminiscent of other city circuits such as Sochi and Jeddah, with the barriers very close to the ideal trajectory traveled by the drivers. Finally we arrive in the third sector, the decidedly more difficult one with some narrow guided curves, which in part resemble the bottleneck of the Baku circuit in Azerbaijan.

Here the drivers will have to be very careful, as the track tightens in a slow chicane followed by another sharp bend, which will throw us on a long straight. Deactivating the DRS we arrive at the last braking point of the circuit, which takes us into a curve to go through in a fluid way to obtain maximum traction at the exit and push us towards the finish line. Just like in Imola, the main straight is not really a straight, because there is a slight “S” curve that the drivers will ride at full throttle anyway.

Steering wheel, pedals, gloves, some quick calibration just to fix the feeling of the force feedback, total removal of the driving aids and you get on the track. In our test we wanted to experience the unpublished driving sensations of these new cars with a completely different aerodynamic concept.

We will not go into details, because we want to further explore the renewed driving model with further tests in the other tracks of the Formula 1 world championship. So stay tuned to our pages where further news on F1 22 will be published shortly. However, we want to share our experience with you. driving in Miami circuit, which initially put us in a bit of trouble with several oversteer, spin and some long braking. Driving without help is not so immediate, especially if you take away the ideal trajectory in an unknown circuit, thus having to find the ideal braking points “by eye”. Those who want a more casual experience will be able to count on the numerous facilities introduced by the developers and still have a good experience driving Formula 1 single-seaters.

In the first sector you must try to maintain the ideal trajectory, to whiz along the fast corners avoiding the brake pedal as much as possible. Fortunately, in the three heaviest braking sections we will have plenty of escape routes, even if the goal is to brake around the hundred-meter sign and point the nose of the car at the apex of the corner to get out well in traction. The last sector is undoubtedly the one that has put us most in difficulty. The “semicircle” curve followed by that (damned) narrow stretch requires good practice to be done at best. And it is extremely important to do this section well, because it will project us towards the last long straight, where we will have the opportunity to attack our rivals on the track.

Miami is a runway of high speeds, therefore we will aim to have a rather unloaded set-up, which however will make us suffer a lot in the narrow section of the last sector. Here, in fact, the car will tend to suffer from understeer and oversteer, struggling a little even in traction.

The lights go out!

After spending a few hours on the Miami circuit, trying to keep a constant pace without too many mistakes, we decided to line up on the starting grid to experience the emotions of a real Grand Prix. Contrary to what happens in other locations, the track is wide enough to allow the cars to flow correctly, even in situations with several single-seaters grouped together. In the only narrow section of the last sector you must necessarily follow the others if you do not want to end up bumping into the barriers.

But basically, despite being a city ​​circuit, it is a track that should not compromise the performance on the track. However, the barriers remain close and the drivers will have to be very careful not to lose control of the car, as they could easily find themselves stuck in the wall. The three DRS zones help a lot those chasing to complete an overtaking and in general, thanks to the new aerodynamic philosophy of the 2022 single-seaters, it is easier to stay glued to the opposing drivers. At the end of the DRS zones there is always a strong braking, which typically helps to overtake the more daring drivers.

In short, the circuit offers the possibility to compete without too much difficulty, having the right space, fast sections in which to overtake and strong braking points where you can make the most risky moves. We hope that what we have seen in the official video game can also be expressed in the “real” Formula 1 championship this weekend.

F1 22: we previewed the Miami circuit