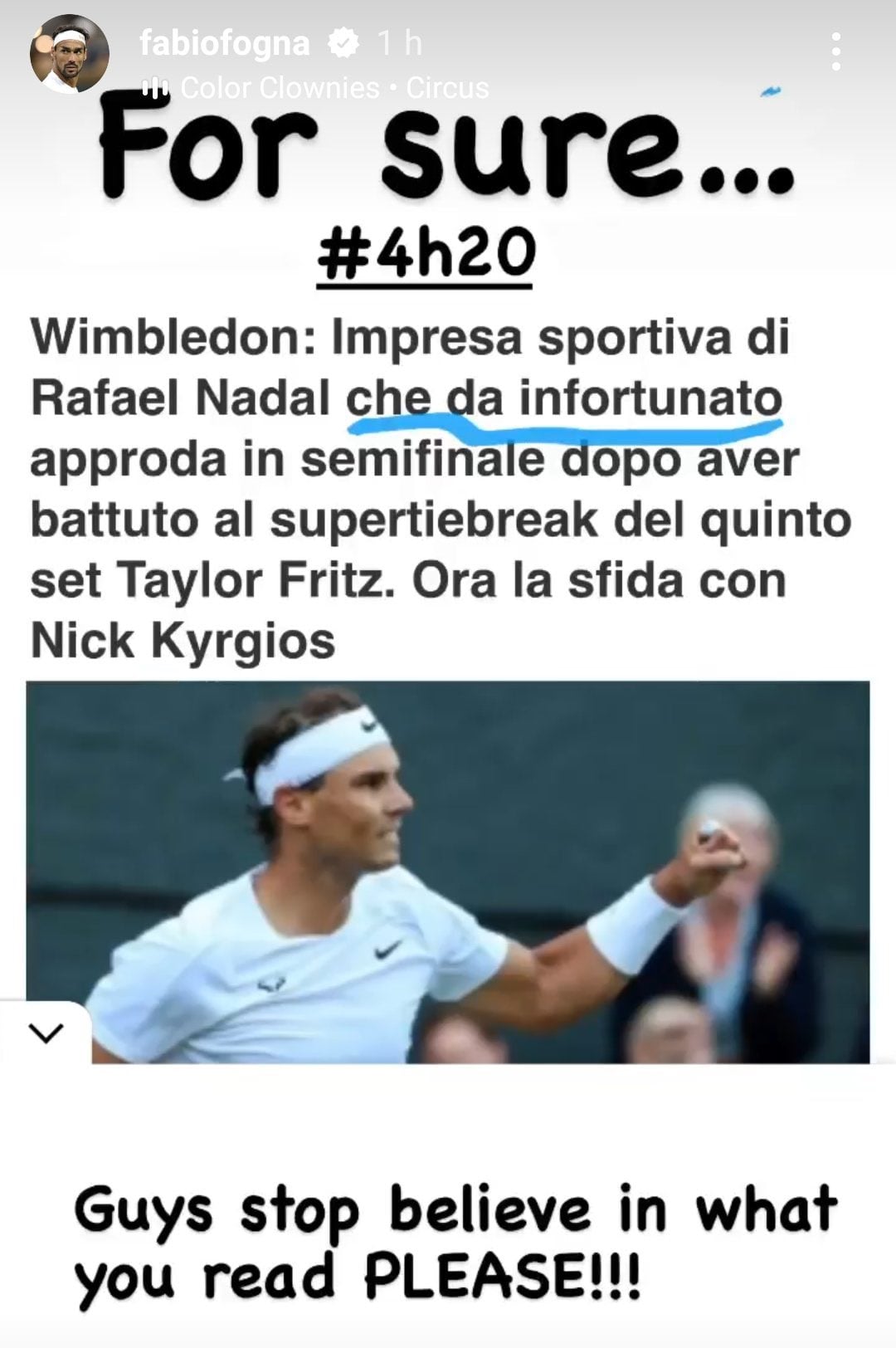 “Stop believing what you read, please.” With a story on Instagram – one of those that disappear automatically after 24 hours but always leave a trace on the web – Fabio Fognini intervened on the victory of Rafael Nadal in the quarter-finals of Wimbledon against Taylor Fritz. The Spaniard won the super tie break of the fifth set, thus qualifying for Friday’s semifinal against Kyrgios.

What went wrong with the 35-year-old from Arma di Taggia, world number 63 who left the stage in the first round at Wimbledon? Most likely the fact that the 36-year-old left-handed Manacor’s victory was told as a heroic feat due to the abdominal muscle injury that the world number 2 had to contend with during the second set, a problem that seemed prelude to a retreat (also suggested by the grandstand by Nadal’s father) which then did not take place. Fognini, taking up an article that appeared on the web, underlined the words “injured”, then adding “for sure” and completing the story with the hashtag # 4h20, the duration of the match between Nadal and Fritz. A way of saying that it is impossible – in his opinion – to stay on the pitch for a long time while injured and win a game.

Subsequently, again on Instagram, the Ligurian tennis player made it clear that he had “never referred to a champion like Rafa. And I could never afford it !!!!”. Then turning to reporters he wrote: “It’s time to stop writing and report everything you want wrong. Having said that, I wish Rafa and his team good luck for this Wimbledon final”.

Nadal stronger than pain and Fritz: he wins at the super tie break of the 5th set and goes to the semifinals at Wimbledon. Great match against Kyrgios on Friday

Nadal – who after his successes in Australia and Roland Garros remains in full swing for the Grand Slam – is expected on Friday from the semifinal against the Australian Kyrgios. It will be? In the press conference, after the match with Fritz, he did not give certainties. “I don’t know I’ll be able to play in the semifinals. I’ll do some tests to understand: I hadn’t been well for a couple of days but with Fritz it was the worst moment. The pain increased, as did the ‘limitations’. I won the match , let’s see what happens now, “said the Spaniard. “I have not yet decided whether I will be on the pitch against Kyrgios or not. The final decision must be made by the player but I have to confront the doctors and do some tests. There is something more important than winning Wimbledon and it is health. Let’s see how it evolves. the situation”.

In Spain, however, no one doubts Nadal’s injury, quite the contrary. According to the Iberian media, the tennis player suffers from an abdominal injury of seven millimeters, even if he wants to play the semifinal and will do everything to be there.

Fognini and doubts about Nadal’s injury victory: “Don’t believe it”