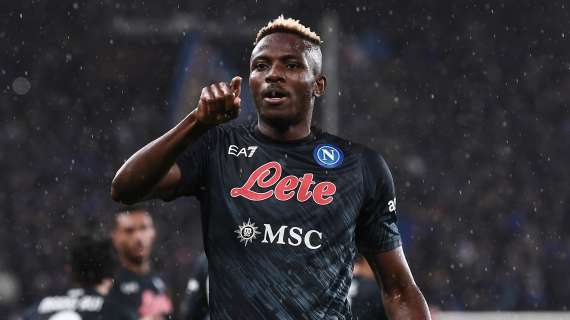 Napoli wins in Genoa with a super performance from Osimhen. Elmas closes the accounts from the penalty spot, Politano’s mistake in the first half.

Zero to violence. Which has no colors, flags, justifications. Scenes from the Middle Ages come from a morning of ordinary madness on the A1 highway that turns into the Fort Apache of a John Wayne western. Violence is fought with knowledge, it must be left without nourishment, it must be withered like flowers that remain without water. “Be the change you would like to see in the world” said someone who is quite good at fighting violence.

One penalty missed by Politano, which ‘removes’ the joke from the designated (word by Luciano) Kvara. There is. It can stay there. Hesitation is one of the biggest risks that this Napoli can find in its path. Matteo felt like it and assumed responsibility. He fell, but he got back up in a great way playing an extremely solid match with applause defensive recoveries. Reacting to the unexpected, absorbing blows, being ready to deliver them in turn: this is how you do it.

Two chances to get back to scoring and an unexpected hesitation. Kvaratskhelia is a Picasso who has gathered a little dust, who is waiting for the right occasion to return to making the jaws of the observer hang down again. His stubbornness is the best news: Kvara is trying to make Kvara. He can’t do otherwise: it’s his nature. Like the story of the Frog and the Scorpion. Try the play, the lap shot, the back-heel even when a normal player would do it differently. He will return to lethally sting: “To deprive the magic of the mystery of him would be as absurd as taking away the sound from the music”.

Three points, how beautiful the taste of three points is. That you can feel it under the palate, that you sink your teeth to bite the sensation to the bottom. More than any other consideration, Genoa needed the three points. I’ll rewrite it, if it weren’t clear: the three points. To nip some buzz in the bud, to slam the door in the face of the wolves in sheep’s clothing that had multiplied after the knockout with Inter. Never like this time, the perfect number was 3. In the bingo indicate the cat: it will take seven lives to cut the final banner.

Unexpected four-wheel drive. When Lobotka change pace, it seems to operate a special button. It looks like one of those toys with a button on the back, you push it and it brings out a super power. It’s everywhere, a perpetual motion that rises and falls to escape the pressure, as if it had the ability to multiply like Mr. Smith in the Matrix. The sound of inevitability that torments Dorian ears, like an intercom ringing on a Sunday morning. What is surprising is not the quality, but all the quantity that supports that type of play.

Five changes like Johnny Stecchino’s bananas in Palermo: you mustn’t touch them. Spalletti gets pissed at the first mention of the argument “Put that or put that other one. I do as I want!” The incazzattura is preventive, the communication strategy clear: Luciano does not want to fuel any controversy about Kvara and his management and has a very strict discipline, even in front of the television cameras. The obsessive repetition of the discipline makes it a winner. Like a Cicero who repeats his prayer in front of the mirror, every blessed day.

Six assists in the league for scientist Mario Rui, which with elaborate calculations of quantum physics gets the balloon into the only possible space for Osimhen. Another pearl for Super Mario, who gives his partner a ball that deserves Proust’s words: “I brought a teaspoon of tea to my lips, in which I had soaked a piece of madeleine. But at the very moment that sip mixed with biscuit crumbs touched my palate, I winced, attentive to what was happening inside me extraordinary”. Goals and assists? Bischerate says Spalletti. Lucia, don’t worry, but we like these jokes.

Seven points on the second and sad faces, very sad. Even of people waving the blue flag: infiltrators. Oscar Wilde would say that “Loyalty is to the emotional life what consistency is to the intellectual life: a simple confession of failure”. How many infidels, how many incoherent people had emerged and had suddenly raised the decibels, demanding attention while announcing imminent defeats, terrible tragedies knocking on our doors. After just four days, everything is pretty much back to how it was.

Eight to Elmas’ ability to fill spaces, to fill the gaps, to make up for absences and carve out space. A summary of its ability to take many forms: Elmas is Mystique from X-Men, who sees someone and takes their appearance. He is still on the hunt for a tactical identity with outlines to be defined, but he is a scrupulous player of the week puzzle who is connecting the dots and putting the pieces of his football together. The more he plays, the more he shows interesting arguments, which have long conquered Spalletti who is madly in love with the diamond. “You were the only one… who believed… that I could be better” is the Macedonian’s dedication to his coach.

Nine away games for 22 points, eight played at Maradona with 22 points. Traces of symmetry, clues that give substance to a dream that Napoli must nurture through matches like the one in Genoa. Abisso stops the Sampdoria fighters, waving cards that Sozza had forgotten at the San Siro, protecting the kicks and penalizing football. The team put on headphones, turned up the music volume, started their personal playlist. On repeat there was only one song, ‘Here comes revenge’ by Metallica: “Here comes revenge, just for you. You ask for forgiveness, I give you sweet revenge”.

Ten goals in 1084′ in the league for Osimhen. An ancient Indian saying goes ‘God speaks to men through stories’ and in Victor’s eyes there is a faith that moves mountains, a determination that razes any impediment to the ground. Indomitable, like a story that wants to reach people’s ears, like a popular cult to be handed down, which cannot be contained. It is air, water, earth and fire that come together in the service of an iron will, of a mission to be accomplished. Osimhen is not a messenger, Osimhen is the message itself. It is a lesson, not to be overlooked. While playing almighty on the Sampdoria field, that ancient Indian saying echoes in my head: “God speaks to men through stories”. We listen, in religious silence.

From 0 to 10: Spalletti gets pissed at the journalists, the useless terror on Kvara, Elmas’ lip and Osimhen’s message