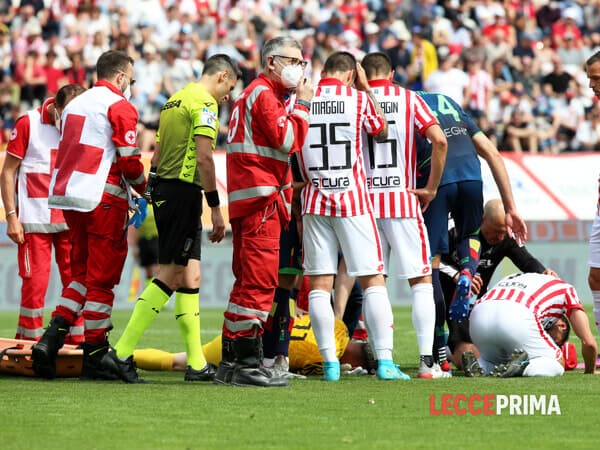 LECCE – At the end of an absurd match, won by Vicenza at the last minute by 2 to 1, Lecce is forced to resort to the second match point: to cross the finish line of direct promotion in Serie A, the last obstacle must be overcome, Pordenone expected on Friday evening at Via del Mare.

The game in Vicenza experienced a moment of rupture at minute 68: after Strefezza’s goal, with the team massed under the visitors’ sector that welcomed about 1,300 Salento fans, a firecracker exploded behind the advertising boards placed behind the goal. Contini. The extreme Vicenza area, although about ten meters away, has collapsed to the ground. Rescued by the team’s doctors, he then went out on a stretcher, replaced by Grandi (taken to the hospital, the diagnosis was of baric trauma and stunning).

Before resuming the game it was also necessary to put the scoreboards back on their feet after the goal (in this circumstance a young ball boy remedied slight bruises on his calf): a dozen minutes passed. The consequences of throwing the firecracker, which remains a dangerous and incomprehensible gesture, will be evaluated by the sports judge based on what the referee, Mariani di Aprilia, will have reported on the scoresheet: there will certainly be a maxi fine for the away club. Costadura, hoping to avoid the hypothesis of total or partial closures of the stadium. President Saverio Sticchi Damiani obviously condemned what happened while the director of the technical area, Pantaleo Corvino, indicated in the attitude of the goalkeeper a speculation aimed at altering the course of the match.

When the match restarted Vicenza, forced to win to still hope for salvation, they pushed desperately forward, but without giving any impression of concreteness while the Lecce players gave up the role of the team that was deserving a clear victory for wear those of a bewildered team, almost unsure what to do.

The draw therefore came from a penalty with Diaw in the second crucial episode of the day. The maximum punishment was granted in the 92nd minute by the referee, Marini, after a video review: Helgason barely touches the foot of Meggiorini (who took over from Zonta) who, intervening behind him, anticipates him. The execution, very bad, of the same Meggiorini, is saved by Gabriel but the Var, Ghersini, signals an irregularity of the goalkeeper: at the moment of the serve he had both feet in front of the line. Diaw then went on the spot and guessed the right corner despite the dive on the right side of the Lecce end.

With about a dozen minutes left to play, the hosts exposed themselves even more to the restarts of the Giallorossi until the third decisive episode of the game: when there are three minutes to go Rodriguez, launched on the counterattack and in numerical superiority, looks for Ragusa on the right , ignoring Gargiulo more easily reached on his left. The Vicenza defenders intercept the ball giving life to a new action that Ranocchia ends with a shot at the near post that finds Gabriel unprepared. The parable of the match has been fulfilled.

At the triple whistle of the referee, Vicenza thus found itself in hand the possibility of a direct salvation that passes through a victory in Alessandria, while for the Salentines there is an absurd day to be filed quickly and concentrate solely and exclusively on the match of Friday: Pordenone has already been relegated for weeks, but on the pitch you have to win to get to 71 and not have to worry about other results. Cremonese (66 points), defeated at home by Ascoli, will be engaged in Como against a team with no more pretensions, Monza (67) will go to Perugia with the Umbrians (55) called to the last assault on Frosonone (58) for hook up the train of the play offs. If one of the two from Lombardy does not win, it will still be promotion for Lecce.

The scoreboard of Vicenza-Lecce 2 to 1

Referee: Mariani from the Aprilia section; assistants: Mondin from Treviso and Del Giovane from Albano Laziale.

Lecce lost 2 to 1 in Vicenza. Another match point against Pordenone