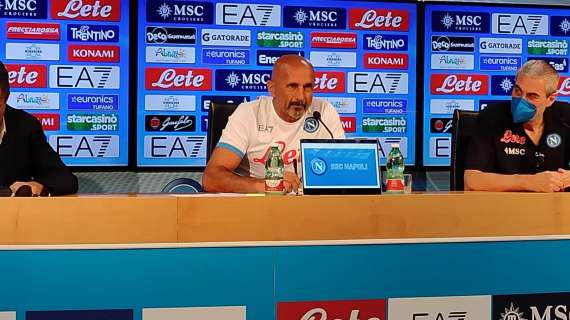 On the eve of the home match against Sassuolo, the Napoli coach Luciano Spalletti he will speak at 3 pm in a press conference from the Castel Volturno technical center about the match against the neroverdi but also about the difficult moment of the Neapolitans and the events of the last few days with De Laurentiis as protagonist. Follow his words in direct text on Tuttonapoli.net

What certainties do we start again this week for Sassuolo? Have the foundations been laid for the future as well?
“Those traced by the president, he is told of him as a caterpillar, but he has shown sensitivity by bringing together all the components to reinforce that single body that has given us so much satisfaction this year. His presence always stimulates the players, he had the sensitivity to talk to everyone at the tables with the boys, he realized the current moment and starts again from this compact, strong, united group that wants to reach the goal of the beginning of the season. We have not talked about the future, we are all projected and determined to do well in these last few races after what happened in the last one. “

You always say the future is tomorrow, but ADL has it armored, your future is in Naples. Do you feel the ambition of the new team re-foundation adventure?
“My future is today’s training, dinner, tomorrow’s match, then if you tell me about the future of my profession then I have another year here and then an option and I want to stay here, I signed for two years and I feel great here and in this city, I don’t see what problem there is. I am talking about the future as a coach, whoever does this job has the immediate reference to the match “.

How is Spalletti after what happened?
“I’m not happy with the last game, with what happened, as no one in society and in the team is. But then from zoom in on the analysis, you have to zoom out in a football championship. We were good at creating a chance important, we weren’t as good at exploiting it, it’s a regret, but if you zoom out and look at the completeness, a graph extended to the season, I’m fine with the result because we are fighting for the Champions League, what we wanted all ‘Start”.

Are there no regrets in the end? Are the 4 points enough for you too, as ADL said for the Champions League?
“No, I expect a correct reaction after what has happened, even if in that result there I see many things done well, and others done badly. A sensational result comes out and creates problems, we create manfrine, heated soups that are pulled out, In 25 years that I have been a coach, they always come out, but that’s not the case. A match that shouldn’t have been lost has been lost, but there are many results in football that overturn logic. You do things with professionalism , the president wanted to lend a hand and is welcome “.

ADL said we all got greedy, why did you believe it?
“Because the team had played fantastic football, reacting well to defeats, it was time to push and make the group responsible and participatory, then for one reason or another we didn’t make it, we lost a few points at intervals and therefore we must realize the reality and accept the result on the field, but not bringing this disappointment to a level that must not obscure that we are in the Champions League fight from the beginning, that is our goal, managing to knock out 3-4 teams of that condominium, teams that now seem to have a great championship, let’s face it in the correct way. The disappointment of not being in the Scudetto fight, however, is there and we are sorry for the fans “.

How do you evaluate Mertens’ test with Osimhen and is it a solution for tomorrow too?
“In a positive way, they made good plays, they are problematic players for the opponents, I’m also a Mertens fan, but I’m also a coach and I have to think about a team balance and sometimes we weren’t good at being short and balanced. Mertens has other characteristics of a midfielder and you have to be good at holding the ball, not taking restarts. Tomorrow they can replay very well, they can always do it, but tomorrow it will be difficult, they play well in football and the result depends on who will hold the ball. keep them, it becomes very difficult, otherwise the opposite “.

On tomorrow’s low presale? Only 3-4 thousand tickets?
“(the press office intervenes that denies the data, ed) There are 20 thousand, it seems … reserve question? The reaction is from the sorry fan because he is too in love with these colors. We want to translate it in a difficult moment, as reported , but I always hope to find myself in front of a fan of this type, who reacts like this, I always want to have the people around me for how they reacted.

On the feeling of ADL about the problems of the physical condition.
“It is the same as before, when you are in the offensive phase and you leave two there and you do not manage to restart, going 100 meters backwards, that there appears to the spectator a moment of difficulty in the physical condition, it is always a tactical thing if you have no balance, if you lose the ball you have to immediately re-attack where you lost it, if you make a mistake there with so many offensive men … and we want to do this, by choice from the beginning, leaving numerical parity behind because I don’t like a kick behind , in the area, waiting for the others, I would not be credible, I would not know how to teach it. Then it is clear that there are moments where we are at the edge of the area and you have to defend yourself from the strength of the opponents, but we are the ones there and if you lose balance and take restarts it may seem that there is less condition, but the data does not give differences on normality “.

How is Meret after Empoli’s mistake? Will he be the owner again?
“He is like all those who make a mistake, it is not only his mistake, also mine asking him to play the ball with his feet even if he aims to throw it away, it is a matter of mental setting of what to achieve. The goalkeeper for me is football player, if he has not already become one, the goalkeeper must also build, start the action like the defenders, now all the teams, and I don’t say that I’m old, but also the young people who come here to play it or all abroad, they come on you and make man against man, there is no possibility of starting it easy behind and there is a need for a good goalkeeper with his feet, good coaches are all looking for goalkeepers like this. In improving this quality there is also the being able to miss a few balls, lose a tenth of a second and it’s a mistake like many others, but the first is mine in forcing him, then someone close to him also had to be seen. Training? They are two strong goalkeepers, he or the other can play. “

How’s Demme? Some fuel has it.
“He is fine, he is called up and within the possibilities of being chosen, he knows how to do more things, he is an exceptional professional, intelligent guy, has qualities that are easy to identify, quick in making her turn, due to his size he is also physically strong and enters without fear , but you can’t then ask him to take the goalkeeper’s clearances but he goes to jump, he puts his body, quality, he can play midfielder in front of the defense or midfielder, he adapts to more areas with his way of doing, he also finds himself in other areas for his sacrifice “.

How much did Di Lorenzo’s absence weigh in these games? How is the recovery going?
“He is someone who goes into the extra, into the super-strong, always over, he always finds the solution, he is a leader even if taciturn, having him is different from not having him. You have to evaluate well, even if Zanoli has made his , he showed that he is strong in perspective and that he has many things that resemble Di Lorenzo but he needs some experience. Today Di Lorenzo went well, but being very direct it is something he chooses because he has to feel calm and I am convinced that I am doing the right thing by letting him choose. “

Naples needs emotions, in this moment of sadness and bitterness for the vanished dream, it would be nice to hear from her that she will start again with the same goal and with Mertens.
“We have to take one step at a time, gather around our goal, before it was everything, now it is even more, we have to do this. When we were first it was time to talk about something else, now it is to talk about this and know that it will be difficult, very difficult without proper behavior and all the energy must be thrown there to qualify and get on the bus that leads to the most beautiful tournament in the world.

LIVE READINGS – Spalletti: “Future? No doubt! Disappointment does not cloud the Champions goal and the teams behind! ADL? Sensitivity and stimuli. About Meret …”