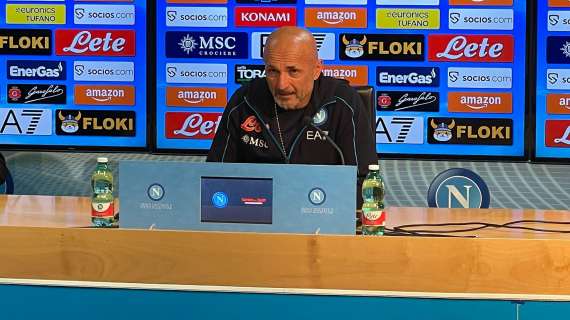 Luciano Spalletti presents Napoli-Spezia, a match scheduled for tomorrow at 3pm at the Maradona stadium.

Luciano Spalletti presents Napoli-Spezia, a match scheduled for tomorrow at 3 pm at the Maradona stadium. The blue coach, as usual, on the eve of the match will speak at the press conference, directly from Castel Volturno, and will answer the questions of the journalists present. Tuttonapoli.net the conference will follow and he will make you aware of it with the usual direct text.

Is it a gamble to define Napoli-Spezia with the same value as Napoli-Liverpool due to the difficulties with Lecce and the low-ranking teams?
“No, he says the right thing. On the contrary, it shows us what the goal should be. We must not focus only on the name of the opponent to make ourselves beautiful, but win and score 3 points beyond the name of the opponent. Knowing how to win a The race, albeit prestigious, means having done things well for 100 ‘because now they last 100 minutes, but to write important pages and have ambitions for fourth place, which is ambitious in our championship, it means doing things well along the way. what makes the difference “.

Are you worried about Osimhen? Do you have in mind who will replace him?
“I stick to the official note, sorry but it is something that can happen and put in the budget, we have equally strong elements to replace him. For his role Simeone or Raspadori … he will be one of them, to be more precise we have to wait for tomorrow . This is how it works in close matches you have to take your time, but both are fine. “

Gotti will change something for the attack at the depth of Napoli. Is Simeone and Raspadori a possibility also together?
“I respect him, I have known him well, I know how he prepares for matches, I know the football he plays, we have already seen him, he has performed well everywhere. If you analyze the last few matches, you can see that he is good at creating density on man, to start off strong on the counterattack with these two full bands who always create difficulties. I do not know what he will organize, but we must know that what happened last year is something that can happen again if we are not perfect. I punch the game, but one chance is enough and therefore we must not give him even a chance, we must be perfect. They are 3 equally fundamental points, as when we play with a famous team. We are ambitious and we must go beyond the opportunism of a match with the spotlight “

Do you expect the same Napoli seen with Liverpool?
“Yes, it sows a character for the course, the matches will tell us. We have always tried to think like this, even when we played against Barcelona, ​​losing by many goals, but that was the wrong attitude? you, when I propose something and it goes wrong, I am wrong, when I propose something that did not suit you and that is fine, then you are wrong. , but after 3 ‘we conceded a goal on that corner badly taken. Against this replay the same? Are we going to get them high? Everyone will now say yes. We built 2-3 scoring by snatching the ball at the start of the action. Our path is clear, then we have to see if we succeed because there are those who evade the pressure. “

Beyond men, is it possible to change the system? Ndombele in the 4-3-3 from the midfielder?
“For those who have us, the hypothesis is to play 4-2-3-1 even if Zielinski or Elmas are in and play 4-3-3 even if Raspadori and Simeone are in, we go from there, Raspadori the attacking midfielder can do behind the striker, the one who starts as a midfielder and ends up behind the striker and attacks the defense together with Osimhen, he doesn’t change much. Ndombele has done both roles, you can ask him both. better, he is inside the group, jokes and does everything the others do, accepts decisions with pleasure, shows every now and then the quality of the plays, the pockets because he often looks ahead and not very close “.

How satisfied are you with Rrahmani-Kim’s progress?
“I am satisfied, they also accepted the man against man at the end of the matches, then they do not limit themselves to the defensive phase but also try to immediately give a verse at the beginning of the action, help to their teammates to give the ball already clean and avoid in a duel to clean up the ball. It’s the solution to everything, if you play well from the start it gets easier for you on the other side.

He made the game with Liverpool seem very simple, playing Liverpool’s game against them. In Italy, however, they close.
“We also have other solutions besides Osimhen who is certainly particular for the quality of running and in the header, in the same race the others also scored and we found that through tight teamwork, Anguissa’s goal arrives in which they they were low team block, it’s all in the level of quality that is expressed in the effort and we have these characteristics to bring out. Simeone’s goal for example, Kvara won two tackles that are not exactly in his characteristics, but he held up, then Frank’s goal, they were 8 at the limit, narrow lines and yet we found space “

On the rotations.
“We need to bring this victory home, then other arguments will be made later. I don’t want to throw water on the fire to hide something, the potential is many, I try to say that then we need this character, this willingness to change the color of the shirts. If tomorrow morning when they get up they still see red is wrong, they will have white shirts and a different attitude, so quality will be needed in adapting to the match and to the climate that will surely be different, that climate is difficult to find, in two I had never seen it in years. Our attitude will make the difference. Tomorrow is a perfect opportunity to show that we always want to be the same, it’s tomorrow. We talk about building consistency in performance, it’s tomorrow “.

With Liverpool you gave Zerbin half an hour who responded with personality, what satisfaction is it for you? Will it be an opportunity for Gaetano too?
“Yes, even Gaetano is of that pasta there, they have the eyes of market operators on them, they asked for them but we decided to keep them and therefore we have our intentions. and motivate themselves after a game in which they did not play. The possibility is there, Zerbin immediately exploited it, he did well when he entered, he did not let himself be intimidated, he has strength, race. Gaetano has an extraordinary quality and will do us comfortable, in moments when we have others available and he will have to bite the brake, but he knows how to do it “.

He said in two years he has never seen a Maradona like this. What do you feel like saying for tomorrow? The presale is proceeding very well.
“I hope that the players know how to offer again that show they want to see, you always go from there. I dreamed in these two years that one day they would suddenly fall in love with them again, at the end of the game I saw it and I am confident for the future. Having the enthusiasm of the fans can help a young team a lot. “

What can the match tell us? Scottish championship suspended, have you received any indications from UEFA?
“Nothing, no communication, we stick to what we know and we go straight to be ready on Tuesday, otherwise we will change, but for now let’s put this into practice. The race can tell us that we are a great Napoli started in August and will end in May. , he will tell us what level we have been able to reach. It is not a single game that changes the future of your career, but it is what happens from game to game. the right path, but we still have to see the great Napoli for many matches. “

On the plays prepared in training and seen on the pitch.
“The goals are always the result of the quality of the plays, then at the end of the first half something was said and that something became visible again. scoring a goal, so if you put some sudden ball back there, it’s part of Anguissa’s characteristics and he put it and Simeone didn’t go over. Those are the moments, put the ball in and don’t cross the line. “

On the emotion of Simeone that struck everyone. Reconcile with football? And how are you?
“Having created a young team like this is for these intentions, that they want to express themselves, have fun, it is good for football, for us, but also for him to be there and to know that based on his attitude he can exhaust his dreams and can be useful. to the whole team. I’m fine, thank you. “

Strong desire to fly on the wings of enthusiasm, confirming Lobotka, Anguissa or Zielinski? And what does he tell us about the growth of the Pole?
“Say there a lot passes, they manage 70% of the game situations in both phases. They have been very good both in terms of ball recovery and in terms of dribbling quality, I have never had big doubts about Zielinski. He is a player who is recognizable for his qualities. that has, what we said in retreat did him well, carve out 10 meters of space for him by playing lower, but attacking more the line is still often there, so he changes little, even if it is something that he imagines and often he is still with his back turned. Having more range of action gives him benefits, last year he also did well as a midfielder because he has a long run. Penalty keeper? in the emotional state, this is easier. The second? Osimhen wanted to beat him, he was calm, it was difficult to go and get it, he was convinced and he is one who has pulled them different in the past. Raspadori and Simeone beat them both very well “.

Is there also a space for Sirigu in the rotations even though Meret is doing well?
“First of all we like to deal with someone like him, he is someone with top character for a locker room, as well as being a top goalkeeper. He wakes up everyone in front of him. It would not be difficult to take advantage of his qualities, but so far I you said I was confusing having two, now let’s leave Alex alone, otherwise he says it’s not true now that I’m the owner (laughs, ed) “

LIVE READINGS – Spalletti: “Spezia? It is worth 3 points like with Liverpool. Great matches are not enough, we need continuity! Osimhen? Two solutions. On Sirigu, penalties and Rangers …”