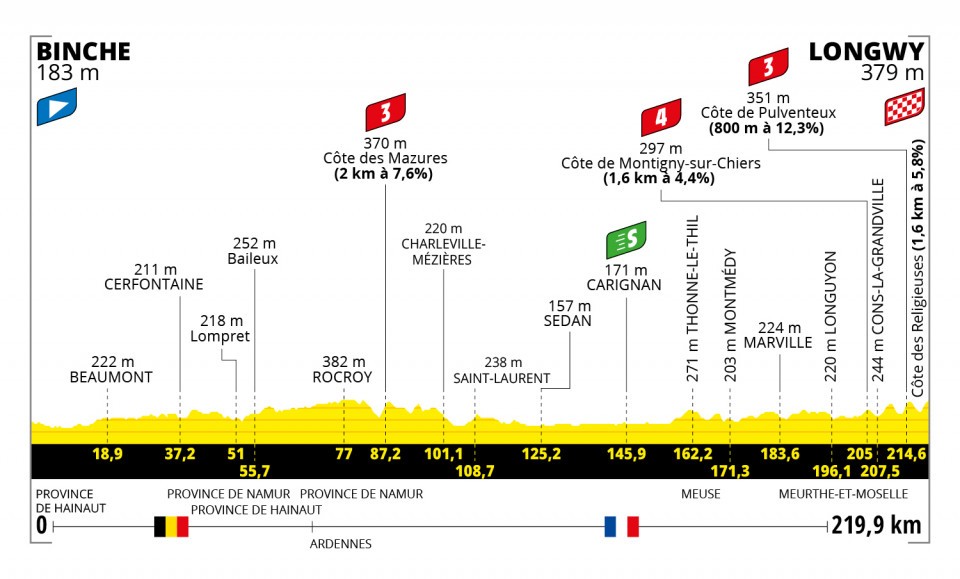 LIVE LIVE OF TODAY’S STAGE OF THE WOMEN’S TOUR

03.03 Now a man from EF Education First is pushing the platoon. An advantage under three minutes is much more manageable.

15.01 In about ten kilometers the intermediate sprint of Carignan.

14.56 Marc Hirschi (UAE Team Emirates) struggles in the final part of the group. You can see that it didn’t even have to be on this Tour, ‘fished out’ after Matteo Trentin’s Covid-19 positive.

14.52 It is Nils Politt (Bora-Hansgrohe) who is leading the chase right now.

14.45 The group must start to accelerate the pace a bit, it is a slightly too consistent margin for someone like Fuglsang, who could have his say in terms of the general classification.

14.40 The Bennett-Hirschi group, 100 kilometers from the finish, returned intent.

14.38 A few minutes ago Van Aert had to change bikes: few problems to get back on his escape companions.

14.36 Behind the group with Marc Hirschi, George Bennett (UAE Team Emirates) and Gianni Moscon (Astana Qazaqstan) is recovering: he is 40 ”from the main group. Good news for Tadej Pogacar.

14.34 Meanwhile, RadioCorsa reports the withdrawal of Luxembourg’s Alex Kirsch (Trek-Segafredo). It is the fourth retired of this Tour.

14.32 We are about to enter a flat stretch of about forty kilometers. At -75 from the finish the flying finish line of Carignan.

14.30 Three men with different objectives on the run today. Van Aert looking for points for the green jersey, Simmons to start battling for the polka dot jersey, Fuglsang to earn something in terms of the general classification. This is precisely why this escape might work.

14.22 The riders complained a bit against the organization of the Tour because of the TV helicopter, which was deemed too close. The criticisms seem to have subsided.

14.20 It should be noted that the Alpecin-Fenix ​​is ​​also appearing in the lead in the group, even if Mathieu van der Poel is not in shape: they will want to play the Jasper Philipsen card.

14.18 Wout van Aert’s response to all those who feared for his health after yesterday’s fall are applauded. The yellow jersey is in shape, and how it is….

14.16 The margin of the escape is expanding, which is now very close to four minutes.

14.15 The situation when 100 km have been covered and 120 km to go: three men, specifically the yellow jersey Wout Van Aert (Jumbo-Visma), Quinn Simmons (Trek-Segafredo) and Jakob Fuglsang (Israel-Premier Tech) they administer a 3 ′ advantage over the platoon. At 5 ′ another group of latecomers, Marc Hirschi and Anthony Turgis the most high-sounding names that are part of it.

14.12 The group’s delay continues to expand! Many riders are paying for the efforts at the start of the stage.

14.09 UAE Team Emirates takes over the reins of the group situation. The Emirati team cannot count on Marc Hirschi and George Bennett, reported in a squad of second lines over 3 ‘from the head of the race.

14.06 Simmons passes first to the top, two points for him in view of the GPM classification and one point for Jakob Fuglsang. Platoon at 2’10 “!

14.00 With an imperious forcing Van Aert is back on the treads! Despite yesterday’s crash, the leg of the yellow jersey seems unparalleled, a group more and more distant at over 1 ‘!

13.57 Chain problem for Van Aert right on the slopes of the GPM! What bad luck, the Belgian has left again but he has to fill the gap from his two fellow adventurers!

13.51 140 km to go until the end of the stage. In front of all the Belgian in the yellow jersey Wout Van Aert (Jumbo-Visma), the Dane Jakob Fuglsang (Israel-Premier Tech) and the American Quinn Simmons (Trek-Segafredo).

13.48 From behind they reorganize and react, the trio is very dangerous! 20 ”of headroom for the treads.

13.45 Bonnamour action ends and Van Aert starts! With the yellow jersey also Jakob Fuglsang and Quinn Simmons! About 200 meters ahead of the group.

13.33 Also this attack exhausted, absorb all the fugitives by a possessed platoon!

13.30 Bahrain Victorious takes charge of the pursuit. Mads Pedersen is the closest fugitive in the standings to the yellow Van Aert jersey (+36 ”).

13.27 The group does not give up and remains in contact: the delay to be bridged is always around ten seconds.

13.24 Franck Bonnamour (B&B Hotels-KTM) is back in the lead: now eleven athletes are leading the race.

13.09 The three attackers are reabsorbed! The pace of the caravan does not stop, always Van Aert among the most active …

13.06 There are only 20 ”left to Toms Skujins (Trek Segafredo), Taco van der Hoorn (Intermarché-Wanty-Gobert) and Benoît Cosnefroy (AG2R-Citroen). In difficulty Van der Poel, always at the rear of the group.

13.03 Shot by Filippo Ganna! Previously, fellow Ineos-Grenadiers Thomas Pidcock had tried to rev up the engine.

13.00 Group skirmishes resume: Latvian Skujins is not a welcome fugitive as he is only 1’06 “away from Van Aert in general.

12.54 The action of Wellens and Jansen runs out, once again a compact group behind the leading trio.

12.51 SIDE WIND AND OTHER FORCING BY VAN AERT! Platoon all in single file, the Norwegian Amund Groendahl Jansen meanwhile has returned in the wake of Tim Wellens.

12.48 The trio in command has gained a minute, Wellens always halfway.

12.39 Tadej Pogacar was not surprised: Slovenian very cautious as happened in yesterday’s stage. Meanwhile, three runners are trying to stretch.

12.33 Forcing of the yellow jersey Wout Van Aert who breaks the group in two! Fireworks in this initial stage, there are 25 in front!

12.31 The pace is so smooth that some runners lose contact, including Guillaume Martin and Mathieu van der Poel!

12.28 High pace in these opening bars but at the moment no one is able to escape.

12.25 Fall for Mathieu Burgaudeau (TotalEnergies). The Frenchman has already got up and is trying to get back into the group.

12.22 We remind you that the blue of TotalEnergies Daniel Oss did not start today (cervical fracture remedied after crash of yesterday). Many skirmishes from the start, several runners try to launch ahead.

12.13 In the starting area some clouds and 18 ° perceived; a few hundred meters to the official start!

12.10 Here are the first pedal strokes, the 5 km of transfer started. Here are the GPMs to be addressed today:

12.04 The runners will start the transfer to km 0 shortly. In the meantime, let’s take a look at the rankings of the Tour de France 2022:

12.01 This is a varied fraction, with three GPMs scattered along the route. Two of the roughness of the day are contained in the last 20 km: fertile ground for possible attacks in the final.

11.58 Good morning passionate and passionate about cycling! In just over 15 minutes, the riders will be riding for the sixth stage of the Tour de France, the Binche-Longwy (219 km).

Good morning friends of OA Sport and welcome to LIVE LIVE of the Tour de France 2022. It goes on stage today sixth stage of the Grande Boucle with departure from Binche and arrival in Longwy after 219 kilometers: the path is long and rather rough, especially in the final.

Archived the fraction of the pavé also today we can expect a great show. Three GPMs to face, the last ascents are contained in the final kilometers and constitute an ideal launching pad for possible hand strikes.

Wout Van Aert and his Jumbo-Visma will want to redeem the unfortunate epilogue of 24 hours ago, while the Slovenian champion Tadej Pogacar has what it takes to stand out once again on the transalpine roads. Watch out for the chances of a possible first hour escape.

The riders will get on the saddle at 12.05, arrival expected at 5.15 pm. Follow the LIVE LIVE curated by OA Sport to not miss a single pedal stroke, the most iconic race on the globe will deliver epic moments. Good fun!