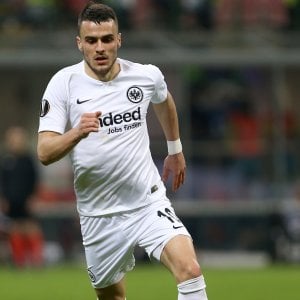 Dybala-Inter, there is the meeting

The negotiation for the transfer of Paulo Dybala to Inter gets to the heart. In the afternoon Jorge Antun, agent of the attacker who will leave Juventus on a free transfer, arrived at the Nerazzurri club headquarters to begin discussing the deal.

Liverpool are getting closer and closer to Benfica forward Darwin Nunez. The 1999 class is Klopp’s real and concrete goal and to secure the player and beat the competition. In England they confirm what was anticipated by Repubblica a few days ago: Liverpool are serious for Nunez and are ready to spend 85 million pounds.

Chelsea want Lautaro or Bastoni in the Lukaku deal

The talks between Lukaku and Chelsea gave the desired outcome: the Belgian convinced the London club to open to theInter on the basis of the loan with obligation to redeem. Chelsea, however, informed the player that the loan should not be free but onerous. Furthermore, the London club likes some profiles of the Nerazzurri squad, in particular Lautaro Martinez And Sticks. The ball now passes to Marotta who is studying the right strategy with the Inter transfer market men to bring Lukaku back to Milan and make him play in tandem with Dybala.

But Bastoni’s agent slows down: “Stay at Inter”

Bastoni’s agent spoke about the future of his client, requested by Tottenham and Chelsea: “Bastoni stays at Inter, I respect contracts. Then if they call me, we’ll see. The boy is happy to play with the Nerazzurri.”

Inter after blocking Bellanova from Cagliari are also trying to take the left outside of Genoa Cambiaso. Inzaghi and Marotta’s idea is to compose the external department with Dumfries and Bellanova on the right, Gosens and Cambiaso on the left. Inzaghi is waiting for reinforcements in the “fifth” zone, crucial in the 3-5-2 of the Nerazzurri coach.

Juventus wants to keep Morata: this is the desire expressed by Massimiliano Allegri, who believes in the potential of the Spaniard. The coach, who has already endorsed the possible purchase of Kostic, would prefer the confirmation of the Spaniard upon the arrival of Di Maria – in turn, however, highly esteemed by him – for technical characteristics but above all linked to the motivations. Juventus have been in contact with Atletico Madrid for days, but the hypothesis of an exchange with Moise Kean leaves the Spaniards rather perplexed by the evaluation of the Juventus forward. The next few days will be very important for the negotiations, especially as the Juventus club will have to have an answer from Di Maria, who is very tempted by Barcelona.

Juve is tightening on Kostic, but there is the Cuadrado grain. Inter, Dybala one step away

by Claudio Cucciatti and Giulio Cardone

Bernardeschi one step away from Naples

Federico Bernardeschi is one step away from Naples. The president De Laurentiis, after revelations about the deal a few days ago, he spoke with Bernardeschi in person. The economic agreement has been found, only the last details of a deal that is entering the hottest phase are missing to file. After leaving Juventus, Bernardeschi leaves Naples again, to the delight of Spalletti who has always been an admirer of the joker.

Pogba, Juve identikit: “I go where I feel loved, I want to play having fun”

The Milan has reached an economic agreement with the Lille midfielder Renato Sanches: the Portuguese has accepted 3 million euros per season for the next four years. Now Milan must file the details with the French club: possible closure of the deal around 20 million euros. As expected, the Portuguese will be Kessié’s heir in the Rossoneri midfield.

Rome, Pobega in the Zaniolo affair with Milan

The Milan insists on Zaniolo: the Roma player is the first goal of Paolo Maldini who in the next few days will present an official offer to the Giallorossi club. Zaniolo is happy in Rome but was disappointed by the lack of contract renewal. The Giallorossi management assesses his card at least 50 million euros, but Milan is thinking of inserting some counterpart in the deal: the Giallorossi like it very much Pobega, last championship in Turin, but Milan would not want to deprive themselves of the 22-year-old midfielder outright. Zaniolo waits, Maldini will attempt the lunge, the ball passes to Roma who through the painful sale of his jewel it could finance the market and satisfy Mourinho’s requests.

“For the moment I’m in Senegal, I’m going on vacation and then we’ll see.” The Naples awaits your reply but Kalidou Koulibaly for the moment it takes time. The almost 31-year-old Franco-Senegalese central, currently busy with his national team, expires in 2023 and his name has been linked to other teams, primarily Barcelona. “I don’t want to lie to you about my future, the truth is that I don’t know anything, I was focused on the national team and I didn’t speak to anyone – replies the person concerned – Now I’ll spend a few days in Senegal and once I’m back in Europe we’ll see, I’ll let you know a lot soon”.

Marcos Antonio to Lazio, there is a background

Marcos Antonio is the first shot scored by Lazio ahead of next season. The midfielder born in 2000 arrives in Rome for 8 million euros and is expected for medical examinations next week. Background: on the Brazilian the competition was relevant. Marseille in France, Rome and Atalanta in Italy tried to enter the negotiations, but the player’s willingness to wear the Lazio shirt was decisive.

The Bayern Monaco did a major survey for Osimhen a few days ago. Looking forward to resolve the Lewandowski case (the Pole wants to leave Germany at all costs, to join Barcelona), the sporting director of the Germans Salihamidži? attempted to buy the Napoli striker. However, the request for 100 million by president De Laurentiis was considered excessive, with Bayern reaching a maximum of 65 million including bonuses.

Manchester United presented the first official proposal to Barcelona for Frenkie de Jong. The Dutch midfielder is the main target of ten Hag’s midfield (considering the very high costs to get to Bellingham from Borussia Dortmund). Manchester has offered 60 million euros: a figure, however, considered low by Barcelona, ​​which asks for at least 75 million. Furthermore, de Jong himself would like to play the Champions League next season and despite the many phone calls with ten Hag he would not be very convinced of land in Manchester.