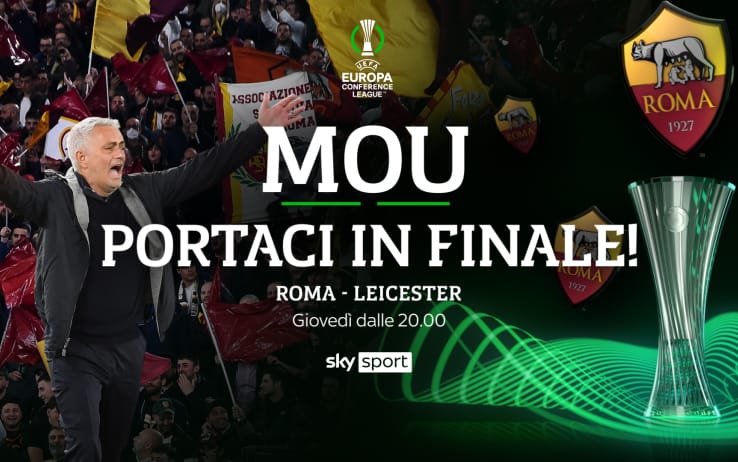 The Giallorossi coach presents the Conference semifinal (Thursday at 9 pm live on Sky Sport Uno, Sky Sport 252, Sky Sport 4K and streaming on NOW) after the 1-1 first leg in England: “To the 70 thousand of the Olimpico, I ask not to be mere spectators, but to play the game alongside us because they can make a difference. Together we can do it. “

Beat the Leicester and qualify for the final of Conference League scheduled in Tirana on 25 May. This is the goal of the Rome by José Mourinho that on Thursday at the Olympic stadium they face Leicester in the second leg after the 1-1 draw in the first leg played a week ago in England. A match that the Portuguese coach presents as follows in the interview on the eve released to Sky Sport, where he reiterated the message with which he charged the fans at the press conference: “Don’t come to the stadium to watch the game. Come to the stadium to play it. “.

You have won everything, Roma haven’t won a title for 14 years. What do these 90 ‘mean?

“For me it always means playing the match I have never won, that is the next one. And the next match I have to face is the most important one for me. But it is also a European semi-final that can take my club to the final, and this gives further meaning “

How does Roma get to this semi-final? What must it have more than Leicester?

“After the 1-1 first leg, with away goals that no longer have double value, it’s a semi-final that is played in a straight match. Their advantage is that when they were in the Europa League they” rested “in the Premier League to play European competitions. Which we cannot do. We have to overcome this disadvantage. They are full of talent, but we want to win. “

A year ago the announcement of his agreement with Rome. A year later, did he expect this honeymoon to be that intense?

“Let’s let a few more weeks go by, then I’ll answer a year after my actual arrival on the Roma bench”

Do you feel the breath of the 70,000 spectators of the Olimpico strong?

“It depends: if the fans go to the stadium to watch the game, having 7 thousand or 70 thousand fans is the same. If, on the other hand, the fans go to the stadium to play the game, then the team feels it, perceives it. Against Bodo we have heard it, it wasn’t 11 against 11. But we played with many Roma players inside the stadium. The last Roma match we played in 11 against 11, plus someone from Curva Sud. But the stadium didn’t play with us. I hope tomorrow the fans want to play because they can make a difference. “


A year of Mou in Rome: the “Special” quotes

These are the words of José Mourinho during the press conference on the eve of the Conference League semifinal between Rome and Leicester.

Leicester thinks only of the Conference and arrives at the match more rested. What weight can this have?

“I hope no one. I have already been in the same situation: when you have no chance in the league to reach the goals it is normal that the focus is entirely on European competition. For them it is a way to get to Europe next season. It is logical that they let someone rest in view of this match, we cannot do it because we are in the championship race and we cannot lose this chance. Tomorrow I hope that the emotions allow my boys to have a very high mood that helps them to win this race “

How do you replace Mkhitaryan?

“We do not have a high Mkhitaryan, there are top teams that have two similar players per position, they are teams that can make a perfect turnover and do not suffer when they have absences. We do not have another player with the characteristics of Mkhitaryan. But the goal doesn’t change, we want to reach the final. Tomorrow will be the 14th Conference match: there will be no Mkhitaryan, but we will face this challenge as a team and it is as a team that we will fight to reach the final “

What gift will you give Rodgers after the bottle he gave her on the first leg?

“I bought him a nice present, but since he wants tea, I’ll keep it to myself”

What do you think of Rodgers and Leicester?

“What they are doing is really fantastic, they have also grown as facilities, they have one of the best training centers. I compliment them. Rodgers does not surprise me, maybe people forget what he did with Liverpool, where with much less resources of the current ones he has achieved extraordinary results. He is the right person for the club. I hope that tomorrow is our day. “

What are your emotions in playing such an important match in front of a full Olympic?

“There is no doubt about the empathy that has been created between us – me and the team – and the fans. We have been together for 10 months, with good and bad moments, and we have always been together with great empathy. ‘Olimpico we will play the last two games of the season: tomorrow the Conference one and then with Venezia in Serie A. It would be nice to celebrate this empathy, which remains beyond the results, playing these two games at the Olimpico at their best. us and for the fans, I’d like the fans to play the game with us tomorrow. You can go to the stadium as a spectator or to play the game. If we have 7 thousand spectators that’s one thing, if we have 70 thousand who want to play history can be different. And that’s what we ask the fans: that they come to the stadium to play with us. “


Rome made for Leicester: 15th sold out

Leicester has a great desire to add another title to their showcase. What does this match mean to you?

“Leicester obviously want to win, also because it’s the only way to go to Europe. For me it’s the same every game. There’s only one game I haven’t won yet and that’s the next game. I always want to win the game. next game, if it’s a semifinal I want it even more “

He seems very happy to be here

“It’s true, I’m happy to come to Trigoria every day. Do I want more? Yes. Do I want the chance to play at a higher level next season? Yes. But I know the project, the club, the players: everyone wants to grow and I’m here to give it my all. I hope to finish the season with something to celebrate. A trophy would be the best. They are strong, but we are too “

What moment are Sergio Oliveira and Veretout experiencing?

“There is no player who can replace Mkhitaryan as characteristics, the two of them are players with different characteristics. We will play as a team and we will always try to hide our problems, because we are not a perfect team. We will try to take advantage of Leicester’s small weaknesses. . Sergio Oliveira and Veretout are in a position to give their best and they will be able to help us. Tomorrow it is possible to win, but only if we all give our best. “

What game will we have to expect tactically compared to the first leg?

“It is always difficult to make predictions, sometimes one prepares a match and then the match goes differently. I would like a match like the one in Leciester, in which Rui Patricio only made one save in 90 ‘, this would mean not having had great problems. The public can help if they want to play with us, but the players must have maturity and intelligence in knowing how to manage it in an unemotional and more rational way “

How does the president and ownership approach this race? Have you exchanged what idea?

“No, I think the president and his sons already know me a little, they know that before the game my life is only with my players and my assistants. I don’t like sharing anything with other people, it was up to me I wouldn’t even do it. But I also know them: they are people in love with football, who live these important moments with respect for our privacy and concentration, but at the same time are super happy to see and win a semi-final at home with the stadium full. Tomorrow we will go out on the pitch all together. If our people want to play, it can make a difference. “

Mourinho to the fans: ‘Play with us’