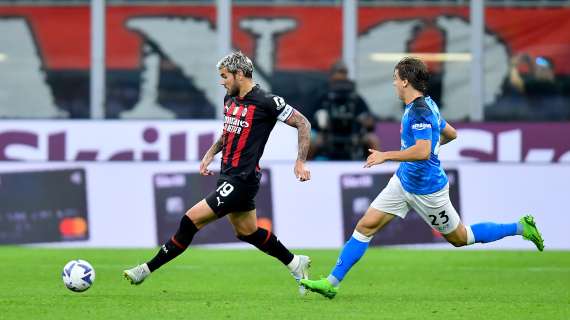 It is clear that digesting a defeat is not easy, especially when you are no longer so used to it: Milan had not lost in the league for 22 days (from the well-known 1-2 against Spezia) and, by losing against Napoli, they tasted again the bitter taste of getting out of a challenge with 0 points. The great performance of Tonali and his teammates was not enough: Spalletti’s men were very cynical, Pioli’s a little too imprecise and even unlucky, but football is this and we must look forward.

Even because…
Also because the year of the 19th AC Milan Scudetto took place with a match in the Milan-Napoli style, which ended, however, with the result in favor of the Rossoneri. The reference is to the very celebrated Giroud derby of February 5, 2022: Inter dominated the match for 70 minutes, generating many scoring chances, finding inaccuracy in front of goal and a great Maignan, but was overturned by a Milan always in the game and very effective in the turn the match with the brace of the French 9. It was the beginning of the glory for the formation of Pioli and the beginning of the decline for that of Inzaghi.

In yesterday’s match at San Siro, as anticipated, something similar happened. Milan dominated in every possible statistic: the heat maps see the Rossoneri dominate the Neapolitans in every area of ​​the pitch, they count many more shots towards the goal (22) and dangerous actions created (19), as well as the touches in opponent area and the so-called exptected goals. The result, however, says Milan 1-2 Napoli and, even if it does not seem fair, in the standings it is not the good performance that counts, but the goals that are scored and those that are not conceded. Yesterday, Milan lost because, despite having outclassed Napoli on several sides, they only scored one goal, taking two; merit also goes to Spalletti’s team, capable of staying in the game all the time and taking advantage of the Rossoneri’s imprecision.

But Milan are not like Inter …
I will repeat myself: yesterday’s Napoli was very similar to Milan in the derby of February 5, 2022. Now, Milan must absolutely prove that they are not like Inter post derby of February 5, 2022. From the statements of Pioli – and from the historian of the Rossoneri in the last 3 years – the reaction to the knockout will be vehement and will lead Leao and his teammates to combine performance and result: “We don’t have to say ‘good guys, we played well’, because if you play well you have to win. I know – explained Pioli in the conference – to coach a strong team and we must not leave this match even more aware of being strong, but angry because we had to win. ” The words of the Nerazzurri post derby were different: there was talk of a dominated derby, of a good performance in any case and of an advantage in the standings to be safeguarded, but the word anger was never put at the center and, above all, it was never seen on the pitch again until 22 May 2022. Milan, for its part, has all the intention, quality and mentality not to make the same mistake as Inter and to prove, once again, that they are the strongest team in the league, not only with their performances , but also with the results.