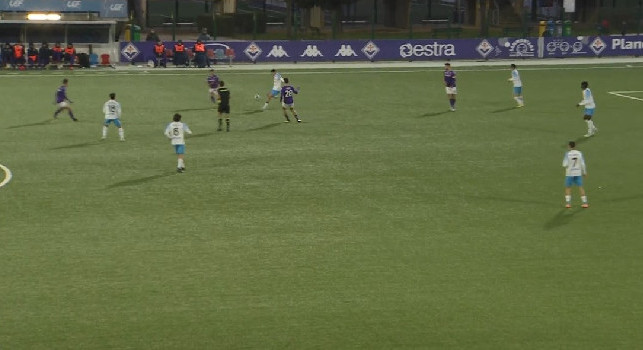 38′ – Red card for Favasuli for a foul on Barba with a far ball, Fiorentina in 10

35′ – Both teams try to push, giving everything to try and win

27′ – Great play by Rossi who also gets Lucchesi booked

20′ – The game resumes, the Viola’s striker has had the worst of the clash

19′ – Change in Fiorentina: Presta and Amatucci in and Nardi and Harder out

18′ – Bad clash between Nardi and Boffelli, the medical staff enters

10′ – GOOOOOOOOOOOOL!! Great launch by Alastuey for Spavone, cross in the center for Sahli who makes it 1-1 for the Azzurri

7′ – Sahli does everything right on the edge of the penalty area, then the final pass is anticipated by a Fiorentina defender

3′ – Napoli picks up the pace in this second half

41′ – Rhythms dropped after the start of the match

35′ – Favasuli gets the first yellow card of the match, he will miss the next match because he was warned

31′ – Rossi tries to even the score, the Fiorentina goalkeeper blocks in two stages

24′ – Goal from Fiorentina: it’s already 1-0! Di Stefano does everything, with Toci forgetting that he only has to support inside on the goal line

20′ – Rossi wastes the opportunity by shooting too quickly

18′ – Hysaj careful to close on the Fiorentina attacker from inside the area, it will be a corner

13′ – Another possible penalty, this time for Napoli. Sahli’s shot was blocked with one arm by a Viola defender

8′ – Capasso asks for a penalty kick for a touch of the hand by one of the Napoli defenders, the referee lets it go

4′ – Sahli dangerous in the penalty area, the Fiorentina defense is careful to close

The match Fiorentina-Naples Spring will start at 16:00.