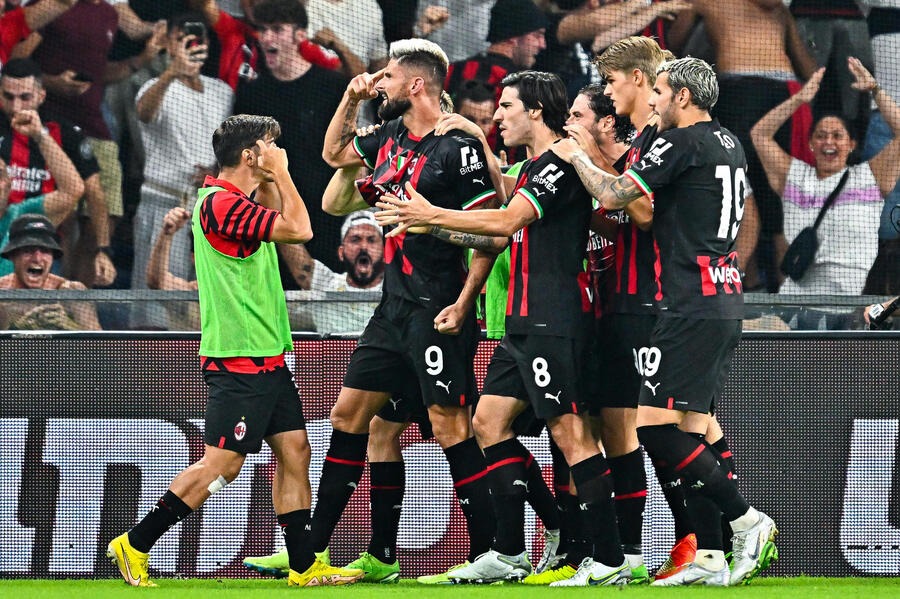 Sampdoria-Milan 1-2 in the evening advance of the sixth day of the Serie A championship, played in Marassi The chronicle

GENOA (ANSA) – GENOA, 10 SEPTEMBER – Milan stoic and winning. The Rossoneri beat the Ferraris 2-1 at the end of a match full of twists, red cards and interventions by the Var. Ten of them for the whole second half, after Leao’s expulsion, Pioli’s team has the strength to fight back to Djuricic, who had equalized Messias’ initial goal, thanks to a penalty from Giroud. In the final, Giampaolo’s nerves jump, expelled for protests towards the referee Fabbri. For Milan it is the first away win, an immediate response to the successes of Inter and Napoli, and first place in the standings with the Azzurri for one night. Sampdoria is still dry and so far has collected just two points. Pioli relies on Giroud with Origi who remained in Milan due to injury. Giampaolo resumes the 4-1-4-1 with Caputo as the first striker. Rossoneri immediately dangerous thanks to a mistake by Djuricic in the middle of the field that triggers Leao’s restart. The Portuguese flies on the wing but at the moment of the shot he finds Ferrari’s deviation in the corner. The match, however, is in the hands of the Rossoneri who take the lead in the 6 ‘.

Action that was born in midfield with Leao who burns Rincon and Bereszynski in one shot. The winger at the limit supports for Giroud who touches De Ketelaere, the Belgian sees and still serves Leao who does not shoot but widens for the rushing Messias and the Brazilian with a low shot beats Audero, not perfect on the shot. But Sampdoria restarts responding shortly after thanks to Djuricic who from the edge on an assist from Rincon looks for the intersection with a shot to effect, but finding the crossbar. It is the only emotion, however, for the hosts who suffer the offensive gusts of the guests and in particular the duel between Leao and Bereszynski with the Pole in clear difficulty. At 21 ‘Milan still in goal with De Ketelaere who heads Audero, wrong exit, but recalled by the Var the referee, after viewing the monitor, cancels for an irregular position of Giroud who participated in the action. In the final half, Milan still dangerous with Giroud, a cross from Hernandez, who from a few steps hits with a sure shot but Audero overcomes himself by redeeming the indecision about the goal. No change in the interval but after less than two minutes Leao looks for an overhead kick in the Sampdoria area on a cross from Calabria, hitting Ferrari in the face instead. For Fabbri it is a dangerous game, second yellow, the first for an elbow on Bereszynski, and Milan in ten for the whole second half. It is the first expulsion for the Portuguese, who will miss the match against Napoli. In numerical superiority Sampdoria begins to grind the game and at 12 ‘comes the tie of the hosts. Caputo opens for Augello on the left, cross for Djuricic’s header that beats Maignan. After the goal came the first changes with Giampaolo who inserts Gabbiadini redesigning Sampdoria with the 4-3-1-2 while Pioli relies on Tomori for Messias passing to 4-4-1. Time to rearrange ideas and Milan becomes dangerous again in the 18 ‘with Hernandez committing Audero. From the corner comes the action that leads to the new advantage of the Rossoneri. In fact, Giroud’s header is touched by Villar with his hand but the episode is noticed by Abisso dal Var who calls Fabbri to the monitor. The referee awards the penalty that Giroud does not miss. In the final, incredible opportunity for Sampdoria. Quagliarella launches Gabbiadini who in the area looks for the far post, Maignan deflects with the tips of his fingers and Verre arrives on the ball from the opposite side who hits the crossbar off-center, the ball remains in play and Gabbiadini tries again but finds Maignan. In the long recovery siege without results for Sampdoria that loses Giampaolo expelled for protests.