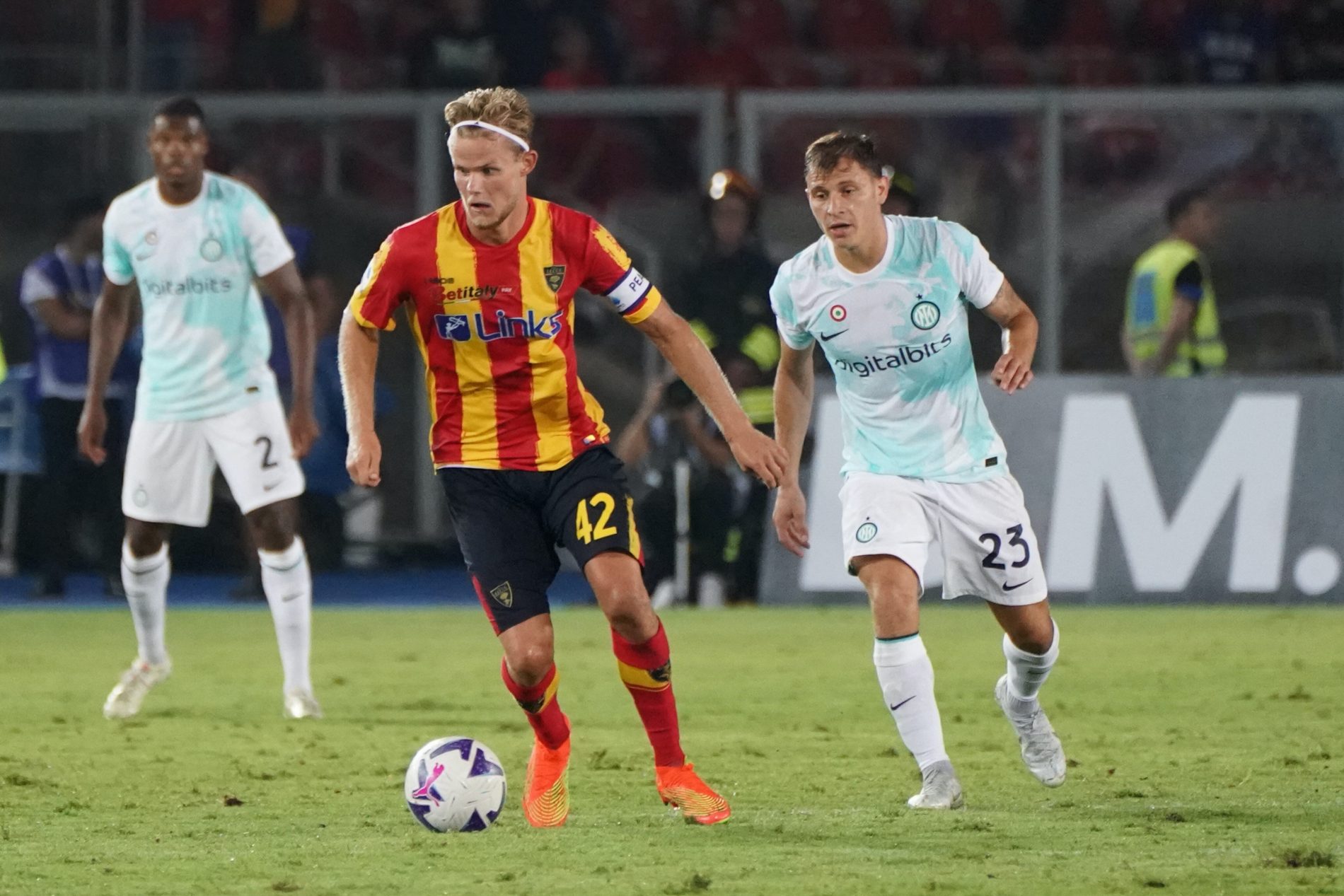 Lecce-Inter, the report cards: behind only hesitates at the beginning and at the end, Blin-Baschirotto at times heroic. Di Francesco and Gonzalez also did well.

Falcone 7.5 – Little to say and a lot to applaud. The new owner thus presents himself with the Lecce shirt in Serie A, making his fans dream of a very heavy point especially thanks to his saves. All in the second half, practically, in which he rises to the chair with four major interventions before surrendering to Dumfries’ belly shot

Gendrey 6 – The list of wolves who fought and sweated often beyond their means on the green rectangle starts with the Frenchman, running and suffering in the right lane. Gosens makes him sweat only at the beginning before being canceled, then with Dimarco it is a crisis and the final dangers of the Nerazzurri brand start from there. He also tries forward, where there will be other races in which he will be called to impose himself

Cetin 5.5 – Nightmare debut for the Turkish, for his health in the first place. The ankle has a tantrum but in defense it is a black crisis and Baroni risks it, initially collecting some good interventions and having no responsibility for the Nerazzurri goal. Then an error in the control takes away his confidence and Lukaku’s physicality does the rest. He asks for the change, he still makes a mistake but as an injured person and his exit is a bit of a liberation for everyone, not just for fault

Baschirotto 6.5 – He was the man who was most feared, he plays a game that would have been perfect without the initial cold shower in which he is not quick to mark Lukaku, yes, but when the defense was in very bad shape. Two other ball and chain mistakes wake him up and from then on for Lukaku, Lautaro but also Dzeko are just crumbs. He earns the applause of the Via del Mare: he can be fundamental especially in this period

Rooster 5 – The couple of wrong crosses in the offensive phase are the least bad things done by the 25 Giallorossi tonight. Ready-to-go and offers Darmian the red carpet for the assist to Lukaku, a situation that is repeated on at least three other occasions with the rear guard who, however, manages to unravel. The growing performance is however encouraging, a sign that we can work on it

Bistrovic 6.5 – He is the least fast in Baroni’s median and it shows, going into pain when the Nerazzurri counterpart accelerates. Time to take the measurements and he too stands the wall, making Falcone suffer as little as possible. Two free kicks for his right, in the second of which by a whisker he does not overturn it

Hjulmand 7.5 – The Dane ate the central midfield of Inter, which was seen today only for a couple of insertions and some ramshackle conclusions. A couple of his tackles make the Via del Mare explode, playing the charge for a Lecce capable in long stretches of dominating Inter. As a champion, he also earns a punishment that, without Handanovic’s miracle, could have told another final

Gonzalez 6.5 – Debut in a professional league for the Barcelona school, and what a debut. The embarrassment is only initial, then between tunnels, accelerations, banks he earns the loaf and only after his exit the Lecce midfield returns to really suffer. A nice surprise, a potential starter for the season

Fatigue 6.5 – Race and sacrifice even more than the coup of class, which this time he missed. In the first half he often seemed like a Lecce against everyone and was the first to make Lecce understand that yes, they could break into the Nerazzurri rearguard. A couple of very big fists, a right-footed shot that was almost worth the overtaking and a very high percentage of successful dribbles, fundamental to create problems for the opponents and let his own breathe

Ceesay 7.5 – A monster that annihilates an Inter defense that has been shaking since the first time the Gambian has touched the ball. Frightening acceleration, incredible depth attack and a quantity of banks in industrial quantities that are always useful. The goal is another invention of him: support for Di Francesco and diagonal to the millimeter after attacking the depth

By Francesco 6.5 – He is a Serie A player and it shows, because he touches not many balls and misses practically zero. In the first fraction he sends Strefezza into the goal who kicks on Handanovic, in the second Ceesay and it is an explosion of joy at the Via del Mare. Only the exhaustion of energy knocks him out after making Skriniar suffer a lot

Blin 6.5 – With his entry into the field ends the moment of suffering of a Lecce who rises to the chair. Always clean interventions, except for a warning foul and a risky retention on Dzeko. Without the final troubles especially on high balls we would be talking about a heroic performance or so

Listkowski 5.5 – Forced to sacrifice himself as a midfielder due to Bistrovic’s fatigue and lack of alternatives, he tries to do his part, managing to give a leg up to try to suffer as little as possible. He could do much more, Lecce would have needed it

Helgason 5.5 – Complicated performance along the lines of Listkowski’s. Try to contain an Inter that has become ultra offensive, managing to make only a small contribution

Band 6.5 – Few balls touched and all practically useful to the team. He presents himself with a great personal inspiration that is almost worth the goal of the advantage, proving that he has the numbers

Colombo 5.5 – Ceesay can’t take it anymore and then it’s up to him, who doesn’t respond as he should. She has fewer playable balls than her partner, but when she does, she also misses control and generally fails to help the team get back on top.

Herds Baroni 6.5 – A half miracle that, up to the 94th and one second, was a whole miracle. It is impossible to ask for more from the coach, who dominated Inter for a third of the match and saw his players risk only isolated gusts at the beginning and end of the match. Net of the couple of conclusions less than the opponents, this Lecce would have deserved a draw and, in proportion to age and training problems, even something more