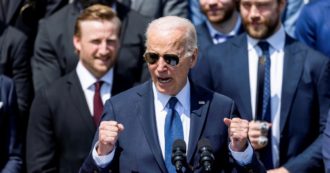 There is a very worrying question (as if everything else was quietly in place and we were living a period of rosy expectations for humanity): I am referring to the Azov battalion. I do not want to discuss the war in Ukraine, the clear and undeniable sins of Putin or the equally evident responsibilities of NATO and the West all, but only on the question of the aforementioned battalion. Speaking of this specific topic, I state that we should all understand that we are running a big risk: the heroic image is being offered to the world, at the level of propaganda. of a neo-Nazi body.

Nobody denies that the members of the battalion in question are in the war, but the real question we all have to ask is: how far do we want to go with propaganda? We want to proceed to designate as “heroes” who fight for “freedom”, without ifs and buts, indiscriminately all those on the opposite side of Russia? Is it enough that they are aligned against Russia to be heroes of “good” versus “evil”? Are we really at this level in the awareness of what is happening in the world? Even in Marvel comics there are more nuances.

When the US said: “No weapons or aid to Azov”

In the case of the Azov battalion we are careful, because in addition to being a horrendous hoax we are risking a very dangerous error, dictated by recklessness not to say by total irresponsibility, for which we can all pay the price. The Azov battalion is openly Nazi and explicitly is denier compared to the Shoah. The ideology is clear and manifest and has nothing to do with freedom. Or is there someone who would like to argue the opposite, namely that Nazism is an ideology based on the concept of peace and freedom of peoples? We really want to define them as “heroes” of freedom just because I’m at war? Are we sure what you are doing?

We really want to legitimize neo-Nazism by putting it among the forces fighting for ideals of freedom and self-determination of peoples? Are the fighters enrolled in the Ukrainian army (perhaps by force) who fight against an invader really equating the neo-Nazis who make up Azov? Do we really want the Nazis, at the end of the story (if ever there will be an end that allows it), to be legitimized, rehabilitated by history and recognized as “liberators” or “martyrs” of freedom? We want to reopen and rewrite some chapters of history in this silly way closed with pain simply in the name of a vulgar and superficial war propaganda?

All the irresponsible people who make cheap cheap propaganda by rehabilitating neo-Nazism in a banal anti-Soviet function are making a historical mistake. unforgivable dictated by bad faith and ignorance of the consequences of such action.

The Supporter blog hosts posts written by readers who have decided to contribute to the growth of de ilfattoquotidiano.it, by subscribing to the Supporter offer and thus becoming an active part of our community. Among the posts sent, Peter Gomez and the editorial staff will select and publish the most interesting ones. This blog was born from an idea of ​​the readers, keep making it your space. Becoming a supporter also means putting your face, signature or commitment into it: join our campaigns, think so that you have an active role! If you want to participate, for the price of “a cappuccino a week” you can also follow the editorial meeting on Thursday in live streaming – sending us suggestions, news and ideas in real time – and access the Forum reserved for discussing and interacting with the editorial staff. Discover all the advantages!

Alexei Navalny: “They say I’ll be transferred to Melekhovo, where they pull the nails out of prisoners”

Blog | Ukraine, it is a big risk to call the Azov battalion ‘heroic’ just because it fights – Il Fatto Quotidiano