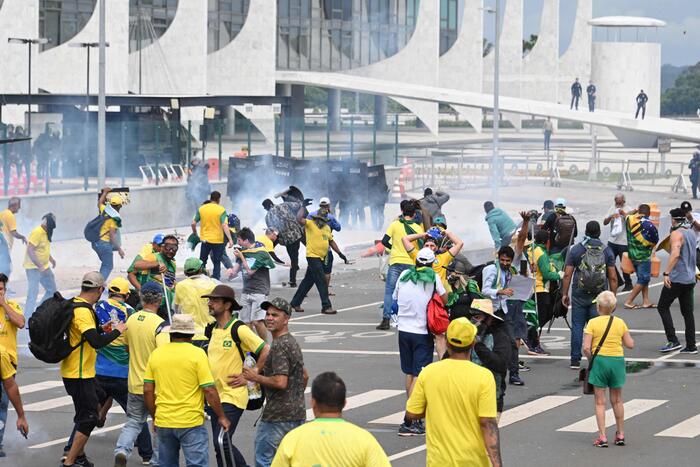 Thousands of ultras of former Brazilian president Bolsonaro stormed the buildings of the highest state institutions in Brasilia in a raid reminiscent of the one two years ago on Washington’s Capitol Hill by Trump fans. A “vandal and fascist” attack against democratic institutions, said the president of Brazil, Luiz Inacio Lula da Silva, visibly upset, assuring that the “terrorists” will be “punished in an exemplary way” . An attack that lasted for hours and which ended with the intervention of federal forces, after an emergency meeting between Lula and the government and after having ordered the closure of the center of the capital.

After having evaluated the possibility of deploying “the army to remove the siege”, the police, even firing rubber bullets from helicopters, after the control of the Supreme Court, managed with difficulty to regain even the land of the Planalto, seat of the presidency, even up to that of the Congress. The first toll is 150 arrests, and also for the former security secretary of Brasilia Anderson Torres, relieved of his post in the afternoon, after the explosion of chaos, immediate arrest has been requested. But tensions in Brazil, where supporters of former president Jair Bolsonaro, who do not accept the victory of new president Inacio Lula da Silva, remain sky-high. According to initial estimates, at least 15,000 supporters cloaked in the green-gold flag took part in the Capitol Hill in Carioca sauce, bouncing images from Dante’s group on world TVs, while a unanimous chorus arose from the EU to Italy of solidarity with Lula.

PROTESTERS TRY TO STORM THE PRESIDENTIAL PALACE IN BRASILIA

The violence by supporters of former Brazilian President Jair Bolsonaro is “terrible,” US President Joe Biden told accompanying reporters in El Pas, Texas. During the day the police used tear gas to try to push back thousands of people who nevertheless managed to break through the security cordons around the parliament in Brasilia at the end of a demonstration in support of the former president. Many climbed up the building to occupy the roof and entered from there. The incumbent president, Luiz Inacio Lula da Silva, was not in Brasilia at the moment but from the state of Sao Paulo where he was visiting some flooded areas he returned to the capital in the evening. The demonstrators, dressed in yellow and green, engaged in acts of vandalism. Videos released by people inside the Tribunal show people breaking up seats in the plenary. In Palazzo Planalto, in the square where the presidential residence, the Brazilian Parliament and the Supreme Court are located, “window panes were broken”. The police forces, in riot gear, ready to break into the occupied Parliament moved only after the new president signed the decree while government officials were evacuated by air.

Exactly two years after the assault on Capitol Hill, it repeats itself, with practically identical modalities and alignments: the militants of Bolsonaro’s right, like the pro-Trumpians, have decided not to respect the response of the polls which gave victory to the ‘left’ and are passed to the armed assault in a phase in which Bolsonaro risks arrest for the management of the Covid emergency. Against the former president, at the time the subject of a Parliamentary Commission of Inquiry (CPI) on the pandemic, the senators first in opposition and now in government intend to re-submit the complaints: in fact, the leader of the right no longer has the privileged forum, the right of the high offices of the state not to be tried criminally by the common courts. But Bolsonaro, who never congratulated Lula on his election, left Brazil on December 30, two days before the end of his mandate, and went on board the presidential plane of the Air Force to Florida, in the United States. “This absurd attempt to impose the will by force will not prevail. The federal district government says there will be reinforcements. And the forces at our disposal are at work. I am in the headquarters of the Ministry of Justice,” tweeted the Brazilian justice minister Flavio Dino who intervened shortly after the attack on the institutional offices.

Military police fired stun and rubber bullets from helicopters to disperse pro-Bolsonaro protesters who have invaded the institutional buildings of Brasilia, as reported by local media. All the windows on the first floor of the Senate have been smashed and some of the protesters have already entered the second floor. Although the Legislative Police and bomb squad have retaken the access ramp to Congress, the top of the building is still occupied.

“Absolute condemnation of the assault on the democratic institutions of Brazil. Full support for President Lula Da Silva, democratically elected by millions of Brazilians through fair and free elections”, writes the president of the EU Council in a tweet, Charles Michael.

“We condemn the attacks on Brazil’s Presidency, Congress and Supreme Court. Using violence to attack democratic institutions is always unacceptable. We join President Lula in urging an immediate end to these actions,” the secretary of Brazil wrote on Twitter. american state, Antony Blinken.

“I am following with concern what is happening in Brazil – said the foreign minister and deputy prime minister Antonio Tajani -. Every act of violence against democratic institutions must be strongly condemned. The electoral results must always be respected”.

“What is happening in Brazil cannot leave us indifferent. The images of the irruption into institutional headquarters are unacceptable and incompatible with any form of democratic dissent. A return to normality is urgently needed and we express solidarity with the Brazilian institutions”, wrote the president of the Advise Giorgia Meloni.

Brasilia like Capitol Hill, the onslaught of Bolsonaro supporters – World