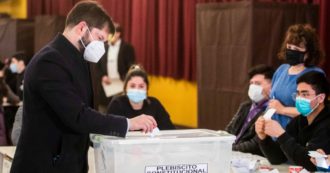 Salvador Allendesocialist, wins the elections in 1970 in Chile with 36% of the vote and as leader of the coalition Unidad Popular. The new government promotes a broad policy of social and economic reforms to overcome some injustices social: above all, the terrible living conditions of the miners who work for large multinationals American; but also the conditions of the rural population and of suburbs urban. We are in the context of the full Cold War and this kind of active reformism And radical alien ad Allende the US sympathies and those of bourgeoisie national. It is a turbulent social situation which, in 1973, is accompanied by one strong economic crisis. The general Augusto Pinochettherefore, he puts himself at the helm of a military coup and theSept. 11 the presidential palace of the Monedain the capital Santiago de Chilehe comes bombed while the army, air force and navy also take control of the other main cities of the country. In a final, dramatic radio message to the nation from inside the Moneda Allende, he says: “It is possible that they will crush us. But tomorrow will belong to the people, it will be to the workers. I will pay with my life the defense of the principles that are dear to this country ”. Shortly after he shoots himself. But what was the significance of that reactionary coup? Ilfattoquotidiano.it he talked about it with the teacher Benedetta Calenderwhich teaches History and Institutions of the Americas toUniversity of Bergamo.

Professor Calandra, what did this dramatic passage represent in the history of Chile and beyond?
“September 1973 still represents a moment of profound fracture for Chilean history and its relevance at the same time transcends national borders: the western left looked with extreme interest at the experiment of President Allende and the broad alliance proposed by the Unidad Popular. In the smoke emanating from the burning presidential palace, the political forces have read the sinking of the peaceful and legal path to the socialist revolution and the risks inherent in the challenge to the interests of local and pro-US oligarchies, the coup can be traced back to endogenous and exogenous factors. The dictatorship, ahead of the Great Britain from Margareth Thatcheralso experiences a ultraliberal economic model strongly desired by the Chilean government, the result of a ten-year collaboration between the Catholic University of Santiago and that of Chicago. It tears down the political, social and cultural project that preceded it and favors other social sectors. At the center of the scene are no longer the disadvantaged urban and rural communities, peasants, workers, organized groups of women and students but medium and large entrepreneurs tend to be affiliated with foreign capital, local oligarchies and massive financial groups, in a highly conservative and patriarchal system. The fabric of popular associations is torn apart, dissidents exiled or physically eliminated, the party and media apparatus put under strict control, if not completely dismantled. There transition to Chilean democracy it had to deal with the authoritarian residues and with the persistence, albeit correct, of the previous economic system.

Last Sunday the draft of the new Chilean Constitution was rejected, which would have led to the overcoming of that of Pinochet. The ambition of the new constitutional project emerges from the preamble of the rejected text which proclaimed: “Chile is a social and democratic state, founded on the rule of law. It is multi-national, intercultural, regional and ecological ”. What could be the explanations for the failure after President Boric’s triumph last year?
Among the various readings of this result (unexpected for its magnitude, but foreseen in substance), I was struck by that of some Chilean historians who pointed out the problematic nature of the multi-national and regional dimension, which was aspired to in the text. This trait, while functioning in other Latin American contexts, if carried out in Chile would represent a decisive discontinuity, not desired by everyone, with respect to the deep roots of a highly centralized state. Furthermore, the initial expectations of those who (voluntarily) had expressed themselves in favor of a Constituent Assembly after the violent protests of 2019, have now been replaced (with compulsory voting) by a sampling of voters not necessarily corresponding: more moderate and sometimes even frightened from a pervasive media campaign that portrayed a series of possible reforms envisaged by the new constitutional charter as insidious, including the protection of an indigenous justice system.

Chile, rejected the referendum to change the Constitution: over 60% of no. Boric summons the party leaders

And Boric?
Boric embodies the legacy of social protest, a young generation that gains political visibility and no longer identifies with the party spectrum of previous decades, regardless of color. However, there is also another Chile, which in the first round of the presidential elections, in November 2021, had decreed the numerical superiority of the ultra-conservative candidate, Kast, keeping everyone in suspense on the second round. To date, probably, Boric will have to not only recover the numerous critics of the method adopted by the Constituent Assembly – rather than the text itself – who have felt cut off, but also renegotiate new forms of mediation with the political forces traditionally present in the Chilean scenario – forces in which a large part of the population does not recognize itself, yet still very influential.

“Chile? It was an ultra-liberal experiment that anticipated Thatcher’s Britain”


You can view our social media profiles here and other pages related to them here.https://prress.com/related-pages/