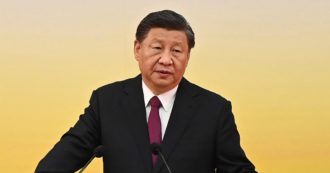 The Chinese reaction to the visit of Nancy Pelosi to Taiwan she has arrived. Not even 24 hours after the departure of the speaker of the American House, who arrived in the ‘rebel’ republic for show its “closeness to democracy”, Beijing flexes his muscles and launches with his army missiles in the direction of Strait of Taiwan. Five ballistic warheads ended up in Japan’s exclusive economic zone. This was reported by the Japanese Ministry of Defense, Nuobo Kishi, who protested to Beijing for the action that could lead to a military escalation: “This is a serious issue that concerns the national security of our country and the safety of the people,” he said. And from Tokyo they say that four of the five ballistic missiles “are believed to have flew over the main island of Taiwan“.

Chinese missiles to Taiwan resemble a ‘recapture test’ of the island. And they are a message to the US, Taipei and internal nationalists

All this took place after the start of the largest military exercises ever made by China around the independence island and after other rocket launches occurred around Taiwan. Journalists of the Afp are located on the Chinese island of Pingtan, close to the ongoing maneuvers, and according to their testimony, bullets were fired from sites near military installations. A Chinese retaliation for Pelosi’s visit that the Chinese Foreign Minister Wang Yi he had already called a “manic, irresponsible and highly irrational” action on the part of Washington. The spokesman for the Taiwan Affairs Bureau of the Beijing government echoed, Ma Xiaoguang, according to which the blitz of the speaker “is not a defense of democracy and freedom, but a provocation and a violation of the sovereignty and territorial integrity of China”. Therefore, while the maxi military maneuvers around the island, “taking the necessary countermeasures is the right move”. Taiwan’s armed forces “operate as usual and monitor our surroundings in response to the irrational activities” of the People’s Republic of China “with the aim of changing the status quo and destabilizing the security of the region,” he said in a statement. the Taipei Defense Ministry at the start of large-scale Chinese military maneuvers around the island. “We do not seek escalation, but we do not stop when it comes to our security and sovereignty. We will support the principle of preparing for war without seeking war and with the attitude of not intensifying conflicts and not causing controversy ”. And in Taipei they warn the population: “Download an app to locate the positions of the more than 5,000 air-raid shelters of the city”.

Military maneuvers to which, the government of Taipei informs, China added another interdiction area for his military maneuvers in the eastern waters of the island, bringing the total to seven. So much so that the Taiwanese army has decided to activate the defense systems. For its part, Beijing has announced that the People’s Liberation Army has “revoked maritime and airspace control off the east coast of the island of Taiwan” with the successful missile launch maneuvers that “They hit all targets with precision”. Soon the exultation for the mission accomplished turns into an attack on the G7, in particular on the United States which, according to Beijing, “caused the troubles, the crisis and which continue to increase tensions”, said Wang Yi commenting on the statement. joint of the Big Seven who yesterday asked Beijing to avoid “aggressive military activity” due to the risk of an “unnecessary escalation” and “not to unilaterally change the status quo by force”. The Chinese Foreign Ministry also has summoned the ambassadors of the G7 countriesincluding Italy, and the EU to “express the most complete disappointment” on the communiqué criticizing military exercises.

The “bad precedent” created jeopardizes compliance with the “Principle of non-interference in internal affairs” and international law, Wang added, according to which “the statement by the G7 foreign ministers confuses right and wrong and unfoundedly accuses China of reasonable and legitimate measures to safeguard territorial sovereignty and integrity. How can they have such a right? Who gave them these qualifications? Isn’t it strange to cover up offenders and accuse defenders of rights? ”. The countries of the region “should unite and oppose the rampant hegemony in the region. Only in this way can we truly safeguard our respective regional security, peace and stability ”. On the same line also the Russia who, with the spokesman of the Kremlin, Dmitry Peskovstated that the military exercises of the Chinese armed forces near Taiwan are “A sovereign right of China”, adding that “the tension in the region around Taiwan has been artificially caused. We fully understand who caused it: the visit of Nancy Pelosi. It was a totally pointless visit and one unnecessary provocation“.

Condemnation of China’s action comes from the EU High Representative for Foreign Policy, Josep Borrell, according to which Pelosi’s visit to the island is not a valid reason to raise the level of tension in this way. “There is no justification for using a visit as a pretext for aggressive military activity in the Taiwan Strait – he tweeted – It is normal and routine for lawmakers in our countries to travel internationally. We encourage all parties to remain calm, exercise restraint and act transparently, ”added Borrell, a Phnom Penh for theAsean, the Association of Southeast Asian Nations. But his message is also addressed to the United States: in a bilateral conversation with the American Secretary of State, Antony Blinken, the head of EU diplomacy declared that Europe and the US “continue to work hand in hand to repel the Russian invasion of Ukraine and the global economic system. We also discussed the nuclear deal with Iran and how to preserve peace and stability in the Taiwan Strait ”. Blinken who, in turn, reiterated that “the United States is opposed to any unilateral effort to change Taiwan’s status quo, especially by force”.

Asean foreign ministers (BruneiCambodia, IndonesiaLaos, MalaysiaMyanmar, PhilippinesSingapore, Thailand and Vietnam) warned that the growing tense situation around Taiwan could trigger “open conflicts”as China prepares to hold large-scale “targeted military maneuvers” surrounding the island. The ministers, in a joint statement, said that the situation “could destabilize the region and in the end it could lead to miscalculations, serious confrontations, open conflicts and unpredictable consequences between the major powers ”.