Dear friends and enemies of Stilum Curiae, it seems interesting to me to bring to your attention this article by Andrea Cionci, whom we thank for your kindness. Enjoy the reading.

Here the video of the event.

While Bergoglio, with feathers on his head, participates in evocations of evil spirits together with the red Indian sorcerers QUTHE and encourages the “Homosexual pastoral care” by LGBT Jesuit James Martin HERE the history of the Church is unfolding in one of his most extraordinary and memorable pages in the indifference – ostentatious, as eloquent – of mainstream.

Last night, a Little Nazarethat Carini (PA) headquarters of the community of don Alessandro Minutellathere was a historic meeting, in fact, where new priests came out, with courage, publicly declaring that the pope is only Benedict XVI, and not Bergoglio, completely regardless of the sanctions that have already hit them and of the others that predictably await them. HERE video .

Good and decisive faces, voices of mild priests who tell the truth without rebellion, indeed, even with a hint of humor: they have already lost their parish and their salary and are now giving themselves up to the Bergoglian ax to testify fidelity to Christ and to his legitimate Vicar in an impeded seat.

As you know, this reality was examined on this very page where we carried out the investigation “Ratzinger Code “ whose book of the same name, to date, is the according to best seller Italian for Mondadori and Rizzoli, HERE

Does it seem normal to you that, apart from Libero, no newspaper writes about this objective editorial case? It is, but in the sense that we have hit the mark and “the system” protects itself under the illusion of making us pass for terrapiattisti.

We are also honored by the fact that some of these priest-heroes gathered in Little Nazareth have resolved residual doubts, as well as through the catecheses of Fr Minutella, also thanks to this investigation.

“The real pope is Benedict XVI – declares the Czech Salesian Fr Pavel, from whom they have taken away his parish, and salary so much that to support himself he had to work in a workshop in Prague – this conviction matured in two years after the search for facts, information that is difficult to find because in the Czech Republic we don’t really know what is going on in the Vatican. While working as a mechanic, I listened to Don Minutella’s catechesis and never felt a dogmatic error. His speech was always logical and coherent. Sincerity, truth, search for the salvation of souls, these are the attitudes that have guided me and I have also told my superiors: I am only interested in souls ”.

“For about six years I have felt that with the pontificate of Francis something is wrong and that it does not have the assistance of the Holy Spirit – explains the Austrian father Johannes – I received the knowledge that Benedict XVI is still the true pope and with him the Catholic Church still remains. I communicated it to the bishop of my diocese a few months ago, I know that this has consequences, but I trust that the Lord Jesus helps me and that he prepares the way. It is he who wins and who must reign in my life ”.

“We certainly cannot go against our conscience – adds don Enrico Bernasconi (not to be confused with don Mattia Bernasconi, the one of the mass on the mat) – and I would like to humbly make an appeal to the brothers who are listening because only the truth makes us free. We must have the courage to expose ourselves without compromise, without making strange alliances. Since I made the decision to celebrate in communion with Pope Benedict, all bonds and fears have been broken and I feel stronger ”.

“In January of this year I had a confrontation with Don Alessandro – says Fra Celestino – I wanted to wait for Bergoglio’s other mistakes to make up my mind… but hadn’t he already made enough? I wanted bishops and cardinals to move before me, but on February 2 of this year I decided not to celebrate in communion with Bergoglio any more and so I lifted a weight from my conscience. I have received restrictions and now I am going to Italy to confess those faithful who do not want to do it with the Bergoglian priests. Possible excommunications do not scare me: amicus Plato, sed magis amica veritas “.

He then takes the floor Don Natale: “In front of the bishops, cardinals, priests, friars and nuns who are open-mouthed in front of Francis, I understood that he is not the true pope, and I have given the explanation by referring also to St. Padre Pio who inspired the my vocation “.

The saint of Pietrelcina in 1960 announced as follows: “It is Satan who has entered the bosom of the church and, in a short time, will come to govern a false church ”.

“Me too – continues Don Natale – I celebrate masses (in communion with Benedict ed), especially in northern Italy. The bishop took away the parish from me, but for me it was an advantage, otherwise I would not have been able to move: I thank the Lord because he has given me a bigger parish. I wish Fr Minutella to continue to lead the Piccolo Resto with his usual wisdom, but above all with the direction of Mary, the «generaless» ”.

“In 2015 – confided to those present father Gebhardt – I celebrated in communion with Francis, but I felt bad: I knew it was not right. So I began to celebrate the Tridentine Mass (in Latin, vetus ordo ed) in communion with Pope Benedict. Many faithful came to these masses and the bishop called saying: “Why are you taking all my faithful?”. I replied: “Your Excellency, this is an opportunity for you too if you have the courage to say that Benedict is still the pope.” The bishop replied: “It is true, the pope is Benedict, as Don Minutella says, but in public it cannot be said, the shame is too great”. Don Minutella is very important for the future of the Church, I was struck by his clarity and truth and, even before I met him, I had begun to celebrate a Mass a day of support for him ”.

And beware: without a mobilization, nothing will be resolved because the 95 false cardinals appointed by Bergoglio would elect another antipope in a forthcoming conclave HERE

As you can see, Pope Benedict is reselecting Catholics, refounding and purifying the Church, strengthening the papacy as Agamben wrote in “The Mystery of Evil”. And in fact he has never reproached or censored these good priests who do their duty and sacrifice themselves for the Church.

Other priests will join the Piccolo Resto and then, finally, bishops and some cardinals will also come out. You will see: as John Paul II said, “The truth imposes itself”.

THE MASTERS OF SOCIAL – AND GOOGLE – TRY TO SILENCE STILUM

THE INFORMATION WOULD NOT BE THE SAME

Anyone wishing to support the work of free information, and free discussion and comparison constituted by Stilum Curiae, can do so with a donation to this account, in the name of the undersigned:

Or on PayPal, marco tosatti

The reason may be: Donation Stilum Curiae 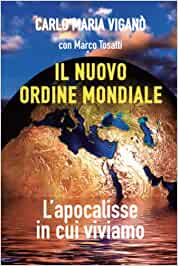 STILUM CURIAE HAS A TELEGRAM CHANNEL

(on TELEGRAM there is also a Stilum Curiae group …)

AND ALSO ON VK.COM

THE INFORMATION WOULD NOT BE THE SAME

Anyone wishing to support the work of free information, and free discussion and comparison constituted by Stilum Curiae, can do so with a donation to this account, in the name of the undersigned:

Or on PayPal, marco tosatti, with this logo:

The reason may be: Donation Stilum Curiae

If you want to receive the new blog articles, write your email in the window on the side.

Did the article interest you? Share it, if you like, on social networks, using the tools below