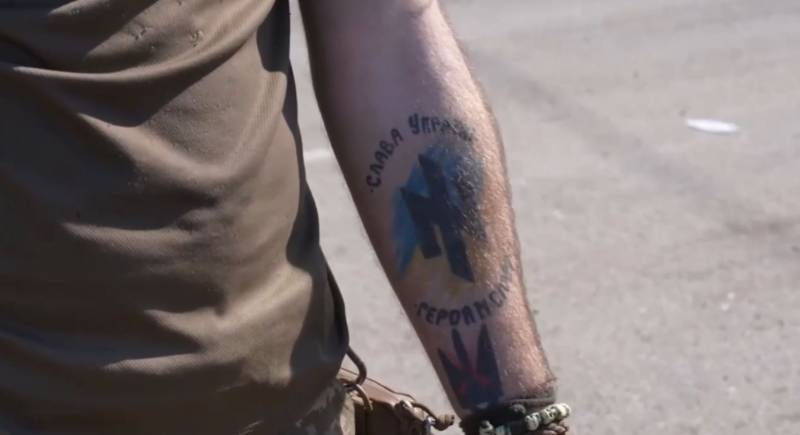 The soldiers of the Azov Battalion they are called one by one. A nod from the Russian soldiers, who ask the surrendered to lift their shirt and put on their underwear, is enough. The men of the Kremlin scan the militiamen in search of tattoos that, in some way, recall the Nazi symbolism. And they find many. After all, the president Vladimir Putin – announcing the start of the “special operation”, as the Kremlin called it – he promised he would “denazify“Ukraine. And these images, released by the Ministry of Defense and aimed primarily at the Russian people, prove it. What the soldiers of Moscow are fighting is a war against the new Nazism.

The most common symbol is that of the Battalion, wrapped in the yellow and blue colors of the Ukrainian flag. As we have already explained, it is the Wolfsangelthe love of the wolves, which was the first coat of arms of the party founded by Adolf Hitlerthen also entered the iconography of Ss.

Other soldiers wear the black Sunused before by the Thule companyone of the esoteric organizations that contributed to the thought and rise of Nazism, and then from the Schutzstaffel, the aforementioned Ss.

Another frequently recurring element is the Totenkrof, the “death’s head”. It is a skull from whose nape emerge some crossbones. Starting in 1809, this symbol was widely used in German military and political iconography. But it is during the Third Reich that the use of the Totenkrof reaches its peak. It is used by the SS and, in particular, by Ss-Totenkopfverbände. Founded in 1936, after the annexation of Austria by Germany, Hitler entrusted them with the custody of the concentration camps.

Runes are widely used by Battalion soldiers. In particular theÔþalan, literally “heritage, inheritance”. Symbol of iron, in ancient times it was worn to protect against trolls and, in general, evil influences. Under the Nazis, this rune was used by the Seventh Mountain Division “Prinz Eugen”, a unit of the SS that was used on the Yugoslav front during the Second World War.

In addition to the Ôþalan, some soldiers of the Battalion were branded with the Lebensruneused by the SS used in the (insane) Lebensborn eugenics projectstrongly supported and supported by Heinrich Himmler, to defend the Aryan race. Tattooed swastikas seem widespread. And it is hard to believe – as stated by Michail Pirog, chief of the 4th Azov Battalion stationed in Zaporizhzhia – whether it is just an “ancient Slavic, pan-European, even Indian symbol”.

Also because there are those who have had the Sigrunea symbol that indicated the sun but which was then associated with victory (in German Siegin fact) and then at the initials of the SS. These images were recorded outside the Azovstal factory, as can be guessed from the background and the long avenue behind the soldiers of the Azov Battalion.

However, the Russian Defense Ministry has also released other photos, taken in an indoor location, impossible to identify. So we don’t know if they are pictures of Azov prisoners or not. But they are significant, as long as they are taken with some caution (like all the images that come from this conflict). In the first weeks of the war, in fact, various Russian media released some carefully edited videos and photographs in which Nazi flags and copies of the Mein Kampf, strangely intact among the incinerated walls. More recently, the same media also showed a helmet, fresh from green paint, on which the Sigrune of the SS stands out. It is difficult to say where the documentation ends and where the propaganda. Having made this necessary premise, among the frame widespread by the Russians we see a soldier with a large tattoo on his chest that depicts a hooded man who seems to be holding a torch or, perhaps, a Molotov cocktail. A scene depicting a stadium curve (a man with a megaphone is also present) or an image celebrating the Euromaidan? Impossible to say. But one cannot fail to notice the great one Celtic cross that dominates the chest of man. A little further up, two digits: 14 And 88. The site ofAnti defamation league explains the meaning of these numbers: “It is a combination of two popular white supremacist number symbols. 14 is short for the slogan 14 words: we must guarantee the existence of our people and a future for white children. “88 instead represents the exclamation Heil Hitler (the H is in fact the eighth letter of the alphabet).

Yet another soldier preferred to immortalize Hitler, with swastika in the arm. Another one, Stepan Banderathe leader of the Organization of Ukrainian Nationalists (Oun) who collaborated – in a very turbulent way – with the Nazis against the Soviets and was one of the ones responsible for the extermination of Jews in Ukraine.

Then there is a last vein that the Azov soldiers have decided to represent on their bodies, that one esoteric, obviously also present in the runes that have, in fact, a hidden meaning. Some militiamen have tattoos with goats, mythological animals and pentacles which recall Satanism. After all, Nazism, even before being a political movement, was first of all an (esoteric) culture born in the undergrowth of German circles between the end of the nineteenth century and the beginning of the twentieth century, as the political scientist Giorgio has documented in detail. Gauls.

Putin is not fighting to “denazify” Ukraine. Just look at the numbers to figure it out. The Ukrainian army can count on about 200,000 troops, which can reach 900,000 if we consider reservists. The Azov Battalion, which in 2014 had a few hundred followers, today can count on a few thousand men. A minimal percentage if you compare it to the armed forces of Kiev. Yet the tattoos on the body of Ukrainian volunteers demonstrate the link between them and the Third Reich. A bond that, in these eighty days of conflict, has been forgotten for too long to justify their resistance to the troops of Moscow.

Here’s what the Azov Battalion tattoos are hiding