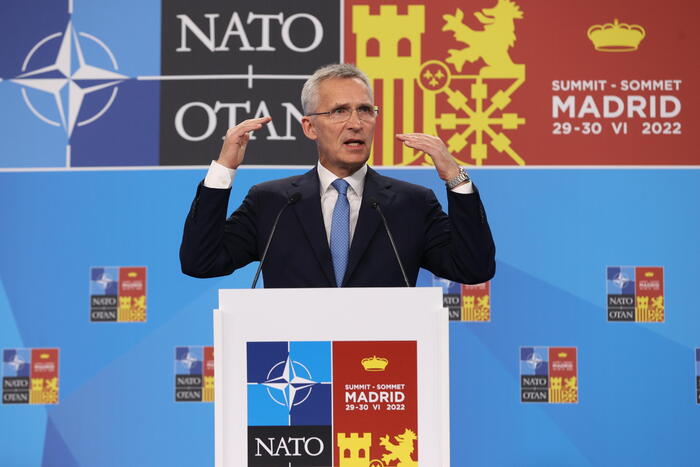 The Ukrainian army inflicted significant losses on Russian troops in the direction of Kramatorsk, an eastern city in Donetsk: this was stated by the General Staff of the Ukrainian Armed Forces on Fb, quoted by
UNIAN. “In the direction of Kramatorsk, the Russians fired at civilian infrastructure in the Siversk and Gryhorivka areas. Ukrainian units inflicted significant casualties on the enemy during its offensive attempt in the areas of the Verkhnokamianske, Belogorivka and Gryhorivka settlements. The occupiers si are withdrawn “, writes the General Staff.

The Ukrainian army would also have repelled the assault of Russian troops near Dolyna, in the direction of Sloviansk, a city in eastern Ukraine considered crucial by the Federation after Lysychansk and Severodonotesk. According to the Kiev army, Russian military forces have been driven back near Dolyna, while heavy mortar and artillery bombardments are underway along the line of contact in the directions of Avdiyivka, Kurakhiv, Novopavlivka and Zaporizhia.

Meanwhile, the Kremlin launches a new attack on the West. “Western countries must realize that they are responsible for the deaths of civilians in the Donbass republics and other parts of Ukraine, where the Kiev regime is using Western-supplied weapons against civilians primarily for intimidation purposes, which is state terror “, said Foreign Minister Sergey Lavrov on a visit to Hanoi, according to reports from TASS.

The Russian offensive in Donbass, after the conquest of Lugansk, continues with the same strategy also in Donetsk: incessant artillery fire and air raids to weaken the enemy before breaking through with troops in the inhabited centers. The next target of Putin’s army is Sloviansk, which has been subjected to intense bombing for three days, with deaths and injuries, while the few thousand people left in the city have been invited to flee by the authorities. Civilians who continue to be the first victims of this conflict, as the UN denounced.

I’m 335 dead children since the beginning of the war in Ukraine. Michelle Bachelet, High Commissioner Un for human rights, he condemned Russia’s “senseless war” in Ukraine calling for an end to the “unbearable” suffering of civilians. Bachelet also asked for compensation for war victims, noting that more than 10,000 civilian deaths or injuries have been documented since the outbreak of hostilities across Ukraine, with 335 children among 4,889 deaths. In his latest appearance before the UN Human Rights Council, Bachelet complained that “as we enter the fifth month of hostility, the toll of the conflict in Ukraine continues to increase”

The mayor of Sloviansk he asked the remaining residents to leave the city after the Russians stepped up shelling on the city in southeastern Ukraine. “It is important to evacuate as many people as possible,” Vadim Lyakh said in an interview with Reuters, according to the Guardian. He adding that “144 people fled today, including 20 children”. Sloviansk is one of the main population centers of Donetsk oblast still under Ukrainian control. Today’s bombing left at least 2 dead and 7 injured.

Ukraine, the arrival of Chechen pro-Russians in Lysychansk

Also in the Black Sea, the Federation has deployed three warships and two submarines, which carry a total of over 30 Kalibr cruise missiles: the southern operational command of Moscow has made it known on Facebook, according to reports Ukrinform. “In the northwestern part of the Black Sea, there are currently three ships and two submarines ready to launch more than 30 missiles,” writes the Command in a statement.

Stoltenberg, ‘historic day, together we will be stronger’ (ANSA)

Zelensky: “We need a guarantee of security even if outside NATO”
“Ukraine is not in NATO. And when we tried to start the membership campaign, we also received a negative response to the request for an Action Plan for membership. But this is not a reason to stop. We need a system of security guarantees, of a space so safe that it can be effective even in conditions in which we are not in the Alliance “. Thus Ukrainian President Volodymyr Zelensky in a speech at the annual round table of the Economist, as reported by Ukrinform.” We are not in NATO but we are on this road – said Zelensky -. And there must be certainty and certainty now: what to do to prevent aggression? What should be done to immediately stop the aggression that has begun? We want to give answers to this and we are currently working on it with our partners, with those States which, in fact, will be able to become guarantors. If such a system were in place now, there would be no war. “

“We need a unity in Europe – said Zelensky – that becomes the largest in history. Of course, much has already been done for this. But not everything yet. For example, what is happening on the energy market in Europe and what is happening right now should be seen as a war. With its gas game, Russia is doing everything to keep inflation rising and to make Europe experience the biggest crisis in history this winter.“At the same time, Zelensky said, addressing the guests critically,” we see that Greek companies supply nearly the largest fleet of tankers for transporting Russian oil. “

Kiev: Russian missiles against a school in Kharkiv
Russian troops launched a missile attack on a school in Kharkiv tonight. Nobody was hurt. This was reported by Oleg Synegubov, the head of the regional military administration of Kharkiv, on Telegram, as reported by Ukrinform. “At 2 am, the enemy launched a missile attack on one of the educational institutions in the Saltiv district of Kharkiv. The building was partially damaged. Fortunately, there were no casualties,” said Synegubov.

Russian forces launched a missile attack on this morning as well Mykolaiv, in southern Ukraine, and have continued to bomb communities in the region: the press service of the regional state administration reported on Facebook. “On the morning of July 5, the occupiers fired rockets at Mykolaiv. Rescuers, doctors, emergency teams and public service workers are already at work,” says the administration without specifying whether there are any injuries or victims. Also this morning, Russian troops bombed the communities of Inhulska, Bereznehuvatska, Bashtanska, Shyrokivska and the village of Lymany in the Halytsynivska community.

Bombs on Donetsk: two civilians killed in 24 hours
Two civilians were killed and four others were injured as a result of bombing by Russian forces in the Ukrainian region of Donetsk in the past 24 hours, the head of the regional and military administration, Pavlo Kyrylenko, said on Facebook, according to what Ukrinform reports. “Russia is killing civilians! On July 4, the Russians killed two civilians in the Donetsk region of Bakhmut. Four more people were injured,” Kyrylenko wrote.


We have our social media pages here and other pages on related topics here.https://prress.com/related-pages/