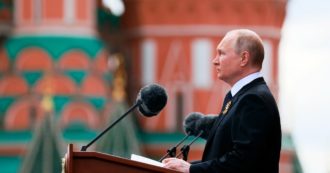 Helping Kiev “so that Moscow does not win”. But working to “restore peace to Europe” and therefore to “the ceasefire“. So without “humiliate” Moscow because “we are not at war with Russia”. Emmanuel Macron intervened at the end of the Conference on the future of Europe to Strasbourg and reiterated that under his leadership he will push for “the independence and sovereignty ofEuropean Union“. At the center of his speech, of course, the conflict in Ukraine and the role that European states must play in this highly complex phase. “We must not give in to the temptation of revenge. Tomorrow we will have a peace to build “and” we will have to do it with Ukraine and Russia around the table. But this will not be done either with mutual exclusion, or even with humiliation ‘”. A very strong message addressed to the states at war at the moment, but also to the US president Joe Biden on the eve of his meeting with Mario Draghi. “For this war to end,” he said, “we have adopted unprecedented sanctions and mobilized humanitarian, financial and military means like never before,” he said. “We are not at war with Russia, we work for the preservation of the integrity of Ukraine, for peace on our continent. But it is only up to Ukraine to define the terms of the negotiations with Russia. Our duty is to be by your side to obtain a ceasefire “.

Today May 9 Europe Day is celebrated and it is no coincidence that it was chosen as the day to present the 49 maxi-proposals developed during the experiment of direct democracy which involved all EU states. A request emerged from the shareholders’ meetings “Modify the treaties” and then review the unanimous voting system. A proposal that was supported today by both Ursula von Der Leyen that from Macron himself: the French president has said that he intends to start a discussion on this subject already in the next one June European Council. Speaking of reforms, the head of the Elysée also invoked the birth of “A wider European political community” which may involve states regardless of the completion of the EU accession process. In the meantime, however, a group of 13 EU countries (Bulgaria, Czech Republic, Croatia, Denmark, Estonia, Finland, Lithuania, Latvia, Malta, Poland, Romania, Sweden and Slovenia) signed a non-paper (informal document) and took sides against the revision of the Treaties: “It would be reckless and premature”.

The EU objective according to Macron: “That Ukraine can resist and that Moscow does not win” – So, he continued, “what is our goal in the face of Russia’s unilateral decision to invade Ukraine and attack its people? End this war as quickly as possibledo everything possible so that in the end Ukraine can resist e Russia does not win, preserve peace in the rest of the European continent and avoid any escalation “. “Freedom and hope for the future have the face of the EU. It is in the name of this freedom and this hope that we will continue to support Ukraine ”.

Ukraine, Putin’s most important words are those he didn’t say. A subdued speech that gives hope for a closer peace

The “bottom-up” proposal for a revision of the treaties and against the instrument of “unanimity”– Macron, as before him also the president of the EU commission Ursula Von der Leyen, he also pushed on the importance of revising the treaties and changing the decision-making mechanisms. “The avant-garde, the different opinions have always been the driving force of Europe’s growth, but in recent years I think that the need to decide at 27 has slowed down this commitment,” said the French president. “The heads of state and government they never come together as a eurozone, and that is wrong. Multi-speed Europe already exists. We must not exclude anyone but we must also not let a few block everything “. Von der Leyen shortly before he had supported the proposal also received by the participants of the Conference themselves: “I will always be on the side of those who want to reform the EU to make it work better“, He declared indicating that he wanted to work in this direction“ without taboos and without any ideological red line ”. “I have always maintained that unanimous voting in some key areas” of European politics “simply it no longer makes sense if we want to be able to move faster ”. A line also held by Macron himself that it is necessary that the union of states move more efficiently and that it learns from its mistakes: “We have fought Covid with science, democracy and effectiveness,” he said. “This is the Europe we must be proud of. Faced with the financial crisis, 15 years ago, we reacted too slowly, we divided, we did not give political answers. In the face of the pandemic and the war, we have proved the opposite. We must be proud of these effective choices, without which we would not be here today to tell us about it ‘”, he added. “Being effective means responding in a compact way without leaving anyone behind. And to do this it will be necessary to reform the Treaties ”. Macron also gave precise times and said he wanted to start the discussion to start a convention for the modification of the Treaties already at the next European Council in June.

Macron proposes to create a larger “political community” – As for instead the entry of Ukraine into the European UnionMacron admitted that the process will take a long time to come: “Ukraine with its heart is already a member of our Union but even if we grant it candidate status tomorrow, and that’s what I hope, we all know that the membership process takes several years, indeed decades, and it must be said with sincerity. We cannot renounce the principles which are the foundations of this Europe ”. This is why Macron made a counter-proposal: “From a political point of view, Europe is wider than the EU” and “the historical challenge that awaits us today” is that of “create a European political community, a new European architecture that would allow democratic European nations that adhere to our values ​​to find a new space for political and security cooperation in the fields of energy, transport, investment, infrastructure, free movement and young people. This would not prevent future EU membership ”.

The conference on the future of Europe: 49 maxi-proposals – The closing of the Conference on the Future of Europe took place in Strasbourg, in the presence of the French president Emmanuel Macron and the presidents of the Commission Ursula von der Leyen and the European Parliament Roberta Metsola. The Conference produced a document with 49 maxi-proposals for the future of Europe, each consisting of a series of sub-proposals, for a total of several hundred. It was a participatory democracy experiment in which they took part 52,346 citizens on the online platform and 800 citizens in the four thematic panels. Among other things the overcoming of unanimity is requested for votes in the Council on foreign and security policy, which should take place by qualified majority. The president of the European Council does not participate Charles Michel, which nevertheless presides over a non-legislative institution, which has political powers. “It is up to our institutions to ensure a follow-up to these proposals, defining priorities, boldly, but without taboos”, said the Secretary of State for European Affairs for the French Presidency of the Council. Clément Beaune. “On May 9 in Moscow there is a parade of weapons and tanks, while here in Brussels the leaders express their renewed faith in the European project: this is the difference between us”, said instead the Belgian MEP Guy Verhofstadt , one of the co-chairs of the Conference.

“Peace cannot be built by humiliating Moscow”: Macron’s words to the EU Parliament


Explore our social media accounts and other pages related to themhttps://prress.com/related-pages/